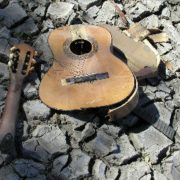 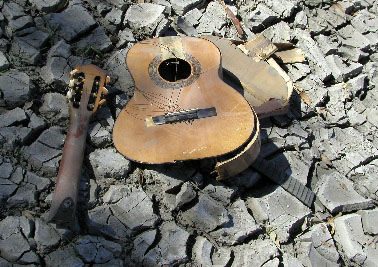 Guitar Bits…literally. Remember the guy who had a hit on YouTube a couple of years ago with his song “United Breaks Guitars?” He’d entrusted his guitar to airline baggage handlers, only to find it in pieces on arrival at his destination.

His was not an unusual story at all. Traveling musicians are at the mercy of the airlines when it comes to flying with instruments. No matter what sort of special flight case you buy, the baggage handlers can and will find a way to damage what’s inside it—often beyond any hope of repair.

The airlines will helpfully suggest (with no thought as to the potential for increasing profit, of course) that if you want your instrument to be safe, then the best plan is to buy it a seat in the passenger cabin. Yeah, sure. For most of us, the cost of that will pretty much wipe out any income you may have earned at the gig you’re flying to.

To combat the problem, musicians have resorted to all sorts of ways to avoid flying with instruments. Some ship their instruments ahead to the venue via carriers like Federal Express and UPS. Others arrange to rent or borrow instruments at their destination. Like many others, I keep guitars stashed in various places around the planet—one in Los Angeles, one in northern California, and one in Florida in addition to the several I have here at home in Scotland.

According to a recent article on grammy.com, the official site of the Recording Academy and the Grammy Foundation, the issue has ruffled enough feathers that The Recording Academy and the American Federation of Musicians have taken it to Congress. The Senate version of the FAA Air Transportation Modernization and Safety Improvement Act, S. 223, includes language that sets a national policy for musical instruments carried onboard airplanes. A House version of the bill does not address musicians’ needs.

S. 223 was an issue lobbied on at April’s GRAMMYs on the Hill Advocacy Day, the music industry’s only annual music lobby day. The goal is to ensure the Senate bill’s musician-friendly language survives conference committee and makes it into the final legislation.

“We need a consistent policy, not airline by airline [or] gate by gate,” says Daryl Friedman, The Recording Academy’s Chief Advocacy & Industry Relations Officer. “Right now musicians are faced with the choice of checking their instruments or buying a ticket for them — and even that is airline by airline.”

To follow the bill’s progress, visit www.grammy.com. I’ll also keep reporting on it here in future editions of this column.

Johnny Cash was given the name “J.R.” because his parents could not agree on a name, only on initials. When he enlisted in the United States Air Force, the military would not accept initials as his name, so he adopted John R. Cash as his legal name. In 1955, when signing with Sun Records, he took Johnny Cash as his stage name.

The pipe organ in the Macy’s store in Center City Philadelphia is the largest functioning musical instrument in the world. It is known as the Wanamaker Organ as it is housed in what was once a Wanamakers department store. First used on site at the St. Louis World’s Fair, it was purchased by John Wanamaker and installed in his flagship store in 1904. It contains over 28,000 pipes and is operated by 600 horsepower of engines to fill the blowers.

The actual largest musical instrument is the pipe organ in the Atlantic City Convention Hall in Atlantic City, NJ. It contains over 33,000 pipes but is currently only about 10% functioning.

Food for Thought… It’s a subject that’s been raised quite a lot lately at festivals, sessions and gigs here in Scotland. What is folk music? If you use the dictionary definition, then it’s only true ‘people’s music,’ passed along orally and sung or played by non-professionals. Of course, we all know that definition hasn’t been practical for years. Most people consider If I Had a Hammer to be a folk song, but it was composed and professionally recorded by Pete Seeger and Lee Hayes.

In Scottish folk music, the difference is often defined by the use of the word “traditional” or “trad” to describe songs and tunes shared by oral tradition, and “folk” to describe those that fit the musical genre but are composed and written down or recorded. But for the past decade or so, there’s been a move toward a broader definition of “folk.” Singer-songwriters aren’t sticking to the traditional topics, and their tunes often differ substantially from what we think of as the usual folk formula. Instrumentals tend to include elements of everything from Reggae to Jazz, and bands include non-traditional sounds like clarinets and digeridoo.

The language is changing to reflect the evolution of the music. Most noticeably, many of the folk clubs have changed their names and are now called Acoustic Music Clubs. The acts they feature are still essentially “folk,” but there’s plenty of room to stretch the definition when it’s necessary.

Is all this a good thing? I happen to think so. The lifting of some unofficial restrictions has allowed songwriters and composers the freedom to produce some amazing new lyrics and sounds. It’s still folk, or trad, or whatever, but it reflects the world as it is today, with cultures existing side by side both literally and in cyberspace.

Chances are that you’ve heard something similar happening in whatever genre of folk or world music you’re most attuned to. Do you like what you’re hearing? Do you worry that old traditions will be lost? Email me, or the editors… your thoughts will be welcomed.

Here are a couple of examples of albums that feature the sort of evolution that’s happening in Scottish music. Have a listen, and see what you think:

Session A9 – Bottlenecks and Arm Breakers

Corrina Hewat – Harp I Do

“If I were to begin life again, I would devote it to music. It is the only cheap and unpunished rapture upon earth.” – Sydney Smith

“To stop the flow of music would be like the stopping of time itself, incredible and inconceivable.” -Aaron Copeland