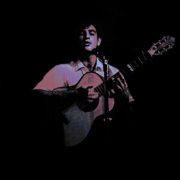 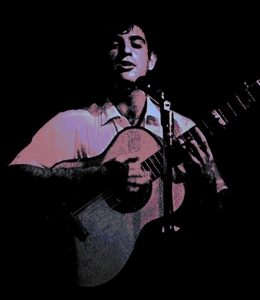 Most performers appear to be ordinary folks when they are off-stage. Then there are those who by nature were born for the stage. One such member of The New Christy Minstrels was Barry Kane, who perhaps under different circumstances might have been considered an average ‘nice Jewish boy’ from Beverly Hills.  But when young Kane strode to the microphone, his maple flamenco guitar strapped to his chest, jet black hair combed back, a few fingerling strands dangling over dark eyebrows, gaze lifted as if to some far-off galaxy, you were in the presence of gypsy royalty.

It was the early sixties, and the folk song resurgence was climbing to its feet in Greenwich Village and in hundreds of coffee houses dotting the American map. It is against this background that this formidable-looking young Rasputin with burning eyes stepped into the spotlight. At the time, my heroes were Pete and Woody. Barry Kane’s hero was Theodore Bikel.

Here is a recorded performance at ‘Ledbetters,’ a club on Westwood Boulevard in Los Angeles in 1964 as testimony:

The New Christy Minstrels had just returned from winning the coveted first prize at the San Remo Music Festival in Italy where Barry had sung the lead in the winning song, Si Piangi, Si Ridi. For the remainder of our stay in Italy which lasted close to a week after the Festival, Barry could be spotted strolling the streets outside our hotels in cape, cane, fedora, and polished leather boots to the delight of the young Italian fans who immediately recognized him and followed him like baby ducks following their mother on the shore of a park pond.

A video of his performance in San Remo appears at the bottom of this article.

Stories about him abound. He was the Christy Minstrel you loved to talk about, and there was always talk, but the following has never been mentioned or disclosed and after so many years, it deserves a place in this talented performer’s legacy. 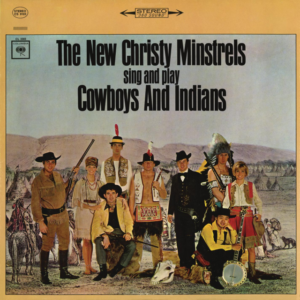 Earlier that year, The New Christy Minstrels were preparing to record a new album titled “Cowboys and Indians.” A grouping of songs written by several members including one by yours truly. Nick Woods offered a few gems, our producer at Columbia Records suggested a song or two that fit the theme, and we were all set to record. By today’s metrics, it still is a fine album. Many of the tracks still hold up to current taste standards.

As was our normal practice, arrangements were arranged, solos were assigned. And as usual, each member counted the number of solos he or she was assigned and compared them with the other tallies.  After all, we humans are a competitive species.

One more week on the road until we were to return to Los Angeles. The usual. Hotels, planes, concerts. Night after night. Rehearsing for the album in the afternoons between shows on the road.

One of the songs scheduled for recording was a beautifully composed song that had been crafted to sound like a Navajo chant or prayer. It was titled ‘Navajo.’

At the time, I think we were in Ohio. My hotel room phone rang. It was Barry.

“Artie, I just got off the phone with an old friend who is studying for his Ph.D. in American Indian lore at Arizona State. I told him about our songs and when I mentioned our upcoming song Navajo, he got all excited and he read me an ancient Navajo prayer that would be an incredible addition to the song. We could easily add it between the second and last verse. I’d be happy to recite the prayer and then we could continue the song to the end!”

“Great idea!,” said I, “What a lucky happenstance!”

And so we did. One week later in the studio, we paused during the second verse while Nick Woods shook a pile of wooden drumsticks in a haunting rhythm, Barry recited the prayer.

The album was a success and played thousands of times in New Christy Minstrel fans’ homes and on the radio. People loved the album, the song. 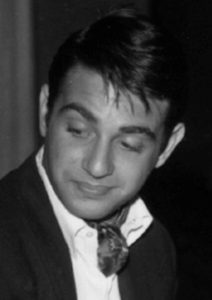 By the end of the decade of the sixties, both Barry and I had left The New Christy Minstrels. We remained friends. In 1975, Barry asked me to join him on stage at the Wilshire-Ebel Theater where he performed a program of Russian folk songs backed by the L.A. Balalaika Orchestra. We sang a few of the old songs together and Barry was magnificent in his singing of several gypsy songs.

By 1989, the heydays of The New Christy Minstrels were well behind us and it was a new and different world. I had left music as a living. So had he. By then, both Barry and I were gainfully employed far from the world of music. We were nine-to-five family men.

On one particular Friday evening that year, we found ourselves seated at a corner table at Taylor’s Steak house in Los Angeles, talking about old times as old bandmates often do. Barry had mellowed considerably.

“Artie, I have a confession.”

“Artie, do you remember the night I called you and told you about my friend at Arizona State who recited the Navajo prayer to me?”

A moment’s pause.  A sip of cocktail. The familiar deep penetrating gaze.

“Artie, I didn’t have a friend at Arizona State.”

“I figured that I needed a more than one juicy solo on the album, so…uh…There never was a Navajo prayer.”

“But the prayer? The Navajo dialect? So authentic sounding. The words!”

“It’s gibberish, Artie. I made the whole thing up. The friend at Arizona State, the prayer…all of it.”

“So you just made up a prayer out of thin air?”

“It’s not an ancient Navajo dialect even?”

Silence as two gentlemen at a corner table stared at each other for a minute that seemed to go on as each waited for the other to say something.

The clink of two cocktail glasses as two friends seated at a corner table burst into laughter that echoed throughout the sedate restaurant. It took a while for them to quiet down.

“Wow. In all these years, all those albums sold, no one has caught on? No angry letters? Nothing?”

So there you have it. Some people get away with murder after all.

Barry passed in 2015. He had become a different person.  Thoughtful, relaxed, at peace with the demons that drove him as a young man, and I spent as much time with my old friend as I could in the last months of his life. He had the soul and fire of a gypsy and he left with dignity, his sins confessed. At least one that I know of. If there were others, you’re on your own.

The truth will set you free...