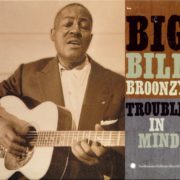 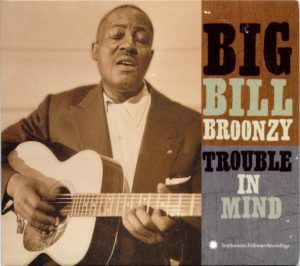 “Never was a white man had the Blues.” Lead Belly

“When will I get to be called a man?” asked Big Bill Broonzy—“Should I wait to get 93?” Dave and Phil Alvin didn’t include that song include that song on Common Ground, their 2014 tribute album to Broonzy. Nor did they include Black, Brown and White Blues, his other great civil rights song—

If you’re white you’re all right

If you’re brown stick around

But as you’re black—

Those are the songs I most revere Big Bill’s name for. He died in 1958, so they were both written well before the civil rights movement of the 1960s. But they were also written before Blowing In the Wind, so I have always assumed that Bob Dylan had Bill’s first song on his mind when he wondered

How many roads must a man walk down

before you call him a man.

John Howard Griffin, the Texas journalist who wrote the book Black Like Me in 1961, recounted the harrowing story of trying to pass as a black man by artificially darkening his skin with a chemical die and spending hours under an ultraviolet lamp. He wanted to see what it was like to live as a black man in the south—and soon found out that he was subject to a “hate stare,” which was unfamiliar to a white man—especially one who took being white for granted. In Mississippi, Alabama, Georgia, and Louisiana he traveled and felt the brunt of being treated with discrimination for the first time in his life—being anything but an Invisible Man, made famous in Ralph Ellison’s novel. I wrote a song about him,

He wanted to see if black lives mattered

Before “Hands up, don’t shoot” became

And John Howard Griffin was his name

So he darkened his skin and slipped incognito

Down south where no one knew who he was

To avoid meeting his eyes—this rebel with a cause.

Chorus: And suddenly he understood the day to day retreat

The most original social experiment anyone had ever done

When this invisible white man became Black Like Me.

Ralph Ellison got it wrong—

He wanted to be the Invisible Man

He couldn’t whiteout his apprehension

He could feel them staring at his back

He didn’t want to be the center of attention

Especially when driving while black. (Ch)

He didn’t want to be black like Michael Brown

He didn’t want to be black like Freddie Gray

He didn’t want to be black like Walter Scott

This post-racial society of the first birther president

John Howard Griffin was a madman and a prophet

Who looked America in the mirror and saw the future.

–Words and Music by Ross Altman–On the album Whereof One Cannot Speak by RA, 2018)

Griffin’s title comes from the last line of a Langston Hughes poem—Dream Variations:

Hughes’ poem perfectly captures the longing of Griffin’s book—as a black man he wants to be surrounded by the night, precisely because it is “Black like me.” He therefore wants to be invisible—to blend in with the darkness. My second verse tries to express that longing in the context of recent events in the “Black Lives Matter” movement that grew out of Ferguson, Missouri’s Long Hot Summer, where teenager Michael Brown was killed—followed by the law enforcement murders of Freddie Gray, Walter Scott, and Eric “I can’t breathe” Garner: 217 murders in the first year alone. By now the tally has grown so large one cannot keep track of it.

Before Michael Brown was killed by a cop—and all the others at the hands of law enforcement as well—Jimmie Lee Jackson was killed in Marion, Mississippi—on February 18, 1965, also by a state trooper. This is the death that led to the Selma to Montgomery Civil Rights March—which resulted in the passage of the Voting Rights Act of 1965. This of course is the Voting Rights Law that was recently decimated by the current US Supreme Court, turning the law back 55 years.

And before Jimmie Lee Jackson there were Goodman, Schwerner and Chaney, also murdered by law enforcement—in cahoots with the Ku Klux Klan—in of all places—Philadelphia, Mississippi—killed in Mississippi Freedom Summer, 1964.

But it all started with the death of 14-year old Emmett Till on August 28, 1955, in Money, Mississippi, about whom Bob Dylan and Len Chandler wrote a song. My column of last March—Hope and History—quotes their entire song, so no need to repeat it here.

We were told just a few years ago that we have reached “The End of History.” We congratulated ourselves that we lived in a ‘post-racial society.’ But that was before the first “birther president,” who in my third verse (see above) did his very best to deny Obama his right to be president. And now this birther President of the United States has been impeached by the House of Representatives, and as we face the new decade will be tried by the Senate. I’m not holding my breath that he will be convicted. So once again, as Carl Oglesby said, it will be up to us, the people.

“The people are alone, as usual, with themselves. It belongs to Americans to claim again, and try to reshape their country. Only the American people can do that. Only the people should.”

As Thomas Paine said, “These are the times that try men’s souls.” Paine was the only one of the Founding Fathers who refused to compromise with slavery;

He called it Common Sense, this act of glorious madness

And though his life ended in sadness he remains a giant

His mighty pen was the first to condemn African slavery

While others compromised he stood alone and defiant.

Thomas Paine inflamed us, he shamed us and he named us

The United States of America for all time

“Where liberty is, there is my country,” Ben Franklin once had told him

From Thomas Paine to Langston Hughes and John Howard Griffin: Nowhere near the end of history are we.

As long as there is bigotry, can history be far behind? Had he not been assassinated the late Dr. Martin Luther King, Jr. would have turned 91 this January 15. And this February, Black History Month brings to mind my late friend storyteller Leslie Perry (May 28, 1936-March 5, 2014) who died of Lou Gehrig’s disease and who would have lit up the stage at Beyond Baroque with his tale of Frederick Douglass’ “What, to the American Slave is your 4th of July?” who asked it of the Ladies Anti -Slavery Society gathered at Corinthian Hall in Rochester, N.Y. on July 5, 1852. “I answer,” he continued, “a day that reveals to him, more than all other days in the year, the gross injustice and cruelty to which he is the constant victim.”

They choked Eric “I can’t breathe” Garner to death

They shot Walter Scott in the back in South Carolina

And a year ago on August 9

Was shot six times before he could run

By the judge, jury, and executioner

The white Ferguson policeman who emptied his gun.

Where they still make yesterday’s news

I got the brand new St. Louis Blues.

So I ask you how much have times changed since Frederick Douglass wrote those profound words 168 years ago? Answer: Not much.

Ross Altman has a PhD in Modern Literature from SUNY-Binghamton (1973); belongs to Local 47 (AFM); heads up the Santa Monica Traditional Folk Music Club; he writes for FolkWorks. Ross may be reached at greygoosemusic@aol.com