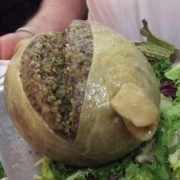 Address to a Haggis 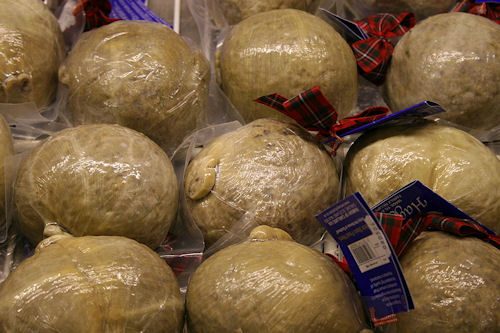 For the first time since we moved here seven years ago, we have decided to give Celtic Connections in Glasgow a miss. It is not that we haven’t enjoyed every moment of it so far, but we felt that giving it a miss for one year, would recharge our batteries and appreciate it all the more next year. Also in Pitlochry at this time was their “Winter Words Festival,” which was a festival about books and authors, and as Pitlochry is one sixth of the distance to Glasgow, and being Scottish, with short arms and deep pockets, we will give it a whirl. It should also be noted that Aberfeldy’s one and only petrol (gas) station is closing tomorrow for ten weeks while new underground storage tanks are installed, not that this was really a factor in our decision.

January is also the month when we celebrate the birth of Robert Burns, our national bard, and Celtic Connections always takes place on or around his birthday on January 25th with Burns Suppers taking place all over the world. His favourite dinner was haggis, neeps and tatties. To the uninitiated, neeps are turnips (or swedes), tatties are potatoes, and the haggis.

Well, I have to admit that the haggis is a matter of some controversy in Scotland. Some would have you believe that is merely a type of sausage, while the more romantic of us know that it is a wee wild beastie that inhabits the highlands of Scotland. Haggis are known for their ferocity, especially when cornered, and can give a nasty bite with their sharp little teeth. Their achilles heel, if you will pardon the pun, is that the legs on their left side are shorter than those on the right. This is fine when you are going round a mountain anti-clockwise, but wreaks havoc when they are forced to go in the other direction. It is believed that the phrase “the tipping point” originated in studies of the haggis and its proclivities for making one hundred and eighty degree turns. For many years the importing of Haggis to the U.S. was banned under the Endangered Species Act, but when we lived In Southern California we were able to obtain some illicit specimens from the East Coast, with no questions asked. 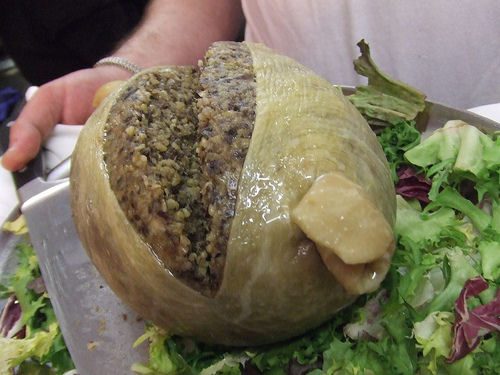 By a strange irony, the taste of the haggis is at its finest in late January, and when consumed, should be accompanied with a large glass of Uisge Bheatha (which translates as the “Water of Life”), the old Gaelic words for Whiskey. The combination of these two flavours that enhance each other, bring tears to the eyes of many an exiled Scot, although possibly for the wrong reasons. Although Robert Burns died at a young age, his poems and songs still resonate around the world.

A Japanese friend of ours says that they play Auld Lang Syne in a chain of department stores there when they are about to close for the day. Look up the life and times of Robert Burns, and realize where phrases like the best laid plans o’ mice and men and a man’s a man for a’ that come from.

2014 is known as the “Year of Homecoming” in Scotland, and the Government is hoping to attract zillions of folks from all over the World, to celebrate their Scottish ancestry. It is also, and this is not a coincidence, the seventh hundredth anniversary of the battle of Bannockburn, where a Scottish army under the leadership of King Robert the Bruce, defeated a much larger English force. It is a little known fact that the Scots employed a battalion of trained Haggis, or Haggi, to bite the English horse’s ankles, and render them incapable of charging forward.

So Scotland, Robert Burns and the humble Haggis are rightly intertwined, and will be as long as we inhabit this Planet.

Address to a Haggis