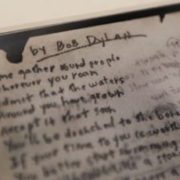 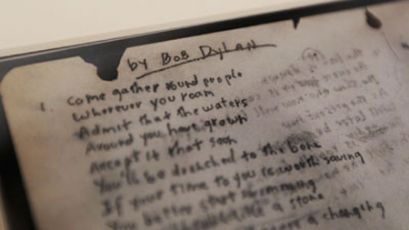 Don’t toss that scribble in the trash: The original manuscript (or, more accurately, a handwritten note) of Bob Dylan’s The Times, They Are A–Changin’ was recently sold at a New York auction for $422,500. Sotheby’s auction house had originally estimated the value of the note at just under $200,000. There is not musical notation on the manuscript, which was owned by singer-songwriter Kevin Krown and purchased by a hedge fund manager.

Dance, even if you have nowhere to do it but your living room. ~Kurt Vonnegut

Poetry is to prose as dancing is to walking. ~John Wain

To watch us dance is to hear our hearts speak. ~Hopi Indian Saying

Do you think dyslexic people have difficulty dancing to “Y.M.C.A.”? ~Dave Sokolowski

OK, here’s a new twist on the phrase ‘world music.’ If you want to hear some music that’s coming from someplace really distant, go anetstation.com and listen to a broadcast that’s coming all the way from Antarctica. Host George Maat presents what certainly has to be the most remote radio show in the world.

UNESCO – the United Nations Educational, Scientific and Cultural Organization – has added the Spanish flamenco tradition to its list of ‘Intangible’ elements of Cultural Heritage. The aim of the list is to recognise elements of living heritage in order to protect and encourage cultural diversity.

In awarding the recognition, UNESCO describes Flemenco as “an artistic expression fusing song (cante), dance (baile) and musicianship (toque). Andalusia in southern Spain is the heartland of Flamenco, although it also has roots in regions such as Murcia and Extremadura. Cante is the vocal expression of flamenco, sung by men and women, preferably seated, with no backing singers. The gamut of feelings and states of mind – grief, joy, tragedy, rejoicing and fear – can be expressed through sincere, expressive lyrics characterized by brevity and simplicity. Flamenco baile is a dance of passion, courtship, expressing a wide range of situations ranging from sadness to joy.”

The harmonica is the world’s best-selling music instrument.

Many thanks to amazingtopics.com for the following:

A few years ago in Japan, members of the Hokkaido National Industrial Research Institute started carving thousands of very precise grooves into nearby roads. the slightly loopy brainwave belonged to a Mr. Shinoda, a guy who accidentally cut a road in several places with a digger and then later drove over the damage in his car. He realised that with some planning and time to kill he could create rows of grooves which, when driven over at a certain speed, would ‘play a tune’.

The result is the ‘melody road,’ with grooves between 6 and 12mm apart: the narrower the interval, the higher the pitch. These stretches of road, each playing a different tune, can currently be found in 3 places in Japan – Hokkaido, Wakayama and Gunma – with the optimum musical speed being a depressingly slow 28mph. Don’t expect a virtual orchestra –it’s not exactly beautiful music, but it’s unique and it’s mental. A winning combination.

Music is forever; music should grow and mature with you, following you right on up until you die. ~Paul Simon

Music is the medicine of the breaking heart. . ~ Leigh Hunt

This will be our response to violence: to make music more intensely, more beautifully and more devotedly than ever before . ~Leonard Bernstein