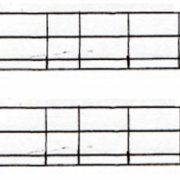 A TUNING FOR EVERY PALETTE 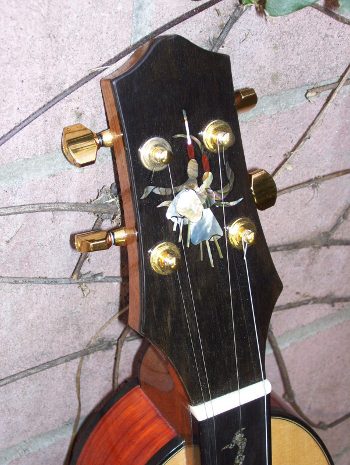 A dulcimer, unlike a guitar, does not have all the frets. Its fret spacing is called diatonic. That means that starting at the 3rd fret, if you play the fret sequence 3,4,5,6,7; the intervals or musical distances between one fret to the next result in the player playing a major scale, otherwise known as do re mi fa so la ti do. Starting at the 3rd fret, it’s fretted to a scale like the white keys of the piano starting at “C”. The notes that are the black keys are missing in the traditional Appalachian dulcimer.

Traditional Appalachian dulcimer players always tuned the dulcimer in what are called “open tunings”. What does that mean? For the dulcimer it means that when you play the melody in a certain key, for example “D”, the other strings are tuned to some of the notes in the “D” chord. If you want to play in the key of “D Major” you could tune the dulcimer strings to D-A-A-A or D-A-D-D or D-A-F#-F# or D-D-D-D (going from the bass string to the doubled melody strings). Just like that you have 4 different tunings, each with a slightly different sound and timber to explore playing in the key of “D”.

[For simplicity in the rest of this article, we’ll use just three notes to indicate the tuning for four strings when the melody strings are doubled, that is, D-A-D-D will be indicated as DAD.]

This is called the Ionian tuning gives you a pure major scale or the Ionian mode starting on the 3rd fret.)

This tuning is called the Mixolydian and gives you a major scale with its 7th note flatted a half step, starting on the open string.

If you want to play in a minor key you have to tune the melody string to a different note, for example either DAC or DAG. I’m not going to explain why. My purpose here is to show the variety of tunings the dulcimer is capable of and how that expands the variety of sound and tonal qualities of the dulcimer.

This is called the Dorian tuning and gives you a minor scale starting on the 4th fret.

Most traditional players stick to DAA or DAD or DAC for songs in a major or minor keys. However, contemporary players starting with Richard Farina in the 1960’s began experimenting with tunings and expanding the range and versatility of the dulcimer.

Let’s look at this:

Instead of the bass note droning the note of the key, the new key note (G) is now on the middle string. The bass and the melody strings are now the 5th notes of the G scale, (which is D).

Another reverse tuning puts the melody notes of the minor scales on the bass string. Again by changing one string, the entire timber of the dulcimer changes and gives you a rich bass melody line.

In this tuning you can only play the minor melody on the melody strings.

In this tuning you can only play a minor melody on the bass string.

Most dulcimer tuning utilize only 3 notes, limiting the richness of chord harmonies you can make. However, if we tune the double melody strings to two different notes, you get 4 note jazzy sounding chords. For example let’s play around with the traditional tuning DAD:

Try playing “Oh Susanna” in this tuning. You get a wonderful jazzy sounding version of a traditional, well-known tune. It adds spice and a whole new dimension to your playing.

There are a variety of ways you can make the two melody strings 2 different notes. For example D-G-DD becomes D-G-GD. Another version is D-A-GD.

This is only about half of the tunings possible on the dulcimer. It’s designed to whet your appetite. What makes the dulcimer so much fun is that you can easily experiment with different tunings. Because the dulcimer has frets missing, once you are in a tuning, improvisation is much easier than other instruments that have all the notes. You just need to be adventurous and be willing to hear some sour notes once in awhile. However, you will be rewarded by the infinite possibility of sound, timber and key you will find on this simple but richly dynamic American folk instrument.

A true creative maverick in the mountain dulcimer world, Joellen Lapidus both embraces the deep rich traditions of the Appalachian Mountain Dulcimer, and creates new traditions. One of the pioneers of an equally rich California Mountain Dulcimer tradition, her rhythmic playing style and elegant shapes and inlaid dulcimers have influenced generations of players and builders. Joellen teaches at McCabes Guitar Shop and dulcimer festivals from coast to coast.

A TUNING FOR EVERY PALETTE