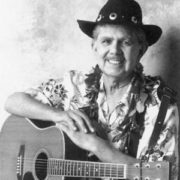 A TRIP TO THE ISLANDS: HAWAI’I BY SONGS 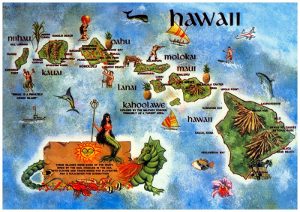 I haven’t actually left yet. But two days from now my husband Michael and I will begin our three-island four-week journey to the tune of Hawaiian music. While playing ukulele with the Aloha Picking Ohana at a Hawaiian Festival in Carson, I realized that many of the songs I’ve played relate to our itinerary, as do some of my favorite Hawaiian recordings. Some are treasured Hawaiian-language songs that often accompany hula. Others are English-language songs that have become standards in the repertoire of Hawaiian musicians. All pay tribute, either directly or indirectly, to the wondrous beauty of the islands.

Soon the trip will unfold! Our plane makes its descent and we can see the shapes of the islands etched on to an endless blue expanse. In my mind, I hear the Brothers Cazimero performing A Home in the Islands:

While there’s no other place that I’d rather be

Than home in these islands in the middle of the sea 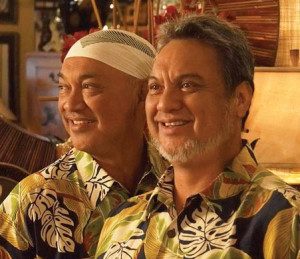 The plane ride also suggests Keola Beamer’s bittersweet song Honolulu City Lights, which relates a view of the city from the plane to his difficult departure from home and joyful return to his family.

In Honolulu, we visit hotel bars and bistros where, for a drink or two and a plate of pupu snacks, you can listen to superb Hawaiian musicians. On the Marriott Waikiki terrace, we’ve heard the late Aunty Genoa singing in her famed falsetto. My favorite is a number I danced to as a beginning hula student – Sweet Lei Mokihana, an appreciation of Kaua’i and its treasured mokihana flower. Her show was like a gathering of family and friends. Between sets she would walk among the tables and greet people in the audience. As she performed with her band, women would rise from their tables spontaneously to dance hula.

At the Hilton Hawaiian Village, Jerry Santos still begins his regular Saturday evening gigs with Ku’u Home o Kahalu’u, his deeply personal song about leaving and returning to his home town of Kahalu’u, which is located on the windward side of O’ahu.

Value-added cultural experience: Hawaii-based Lappert’s Ice Cream has a shop at that Hilton. There I indulge in my all-time favorite flavor: chocolate-coconut-macadamia nut.

On the beachfront patio of the Outrigger Hotel, we’ve heard the award-winning group Maunalua treat listeners to male falsetto and delicious harmonies. At Chai’s Bistro downtown by the Aloha Tower, once a week Robert Cazimero sings many Hawaiian- and English-language songs he and his brother Roland have performed worldwide, accompanying himself on the piano. He always has a hula dancer moving to the music. 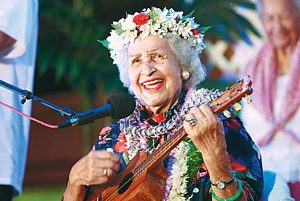 One last O’ahu cultural experience I want to share is located on the north shore. We drive up there to the sound of Hawaiian traditional music heard – as I recall – on the single station that plays such music, a gripe of many musicians I’ve interviewed. The destination is Giovanni’s Shrimp Truck, which is parked on an empty lot near Sunset Beach. There you get the best shrimp scampi ever. Locals and informed visitors like Michael and me line up silently and expectantly in front of the truck’s window for a paper plate of this culinary gold, which we all consume with gusto sitting at picnic tables.

From Honolulu, we fly to Hilo on the Big Island to attend the international Olympics of hula known as the Merrie Monarch Festival. The three-day competition features categories of solo, auana (modern), and kahiko (ancient) hula with live bands accompanying all performances. Often renowned musicians play in these bands, which artfully respond to the nuances of dancers’ movements.

Hilo celebrates for several days before the ticketed competition with outdoor hula and musical performances plus displays of art and crafts. This reminds me of the song Aloha Hilo Hanakahi, which praises people of the town for their hospitality. The group Na Palapalai performs a lovely rendition.

By the way, getting Merrie Monarch tickets was, let’s say, a cultural experience. The organizers reserve blocks of seats for competing halau and their families. There are no press seats and you have to send in an application for tickets which this year were allocated on a first-come first-served basis starting December 1st. They informed us of our acceptance in February. Thank you, Express Mail. 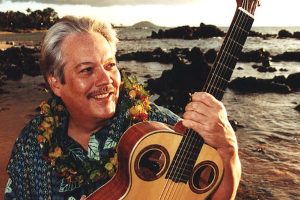 While on the Big Island, we are sure to spend time in the shadow of the majestic crater Mauna Kea. This brings to mind Keola Beamer’s impassioned tribute, The Beauty of Mauna Kea. He begins by playing for a few moments on the nose flute, then chants in Hawaiian. After that, we hear introductory chords on the guitar and Beamer singing of his experience:

The moon moves around her when she sleeps

The clouds stand beside her when she weeps

And I could be forgotten and a thousand miles away

And still I would recall

The beauty of Mauna Kea…

On the Big Island, I want to take once again the narrow, stony path down to the magical Waipi’o Valley. My Aloha Picking Ohana played Waipi’o Paeaea at the Festival yesterday. A few words of the English translation suggest the meaning of this song by Kuana Torres Kahele:

There in the lush growth of Waipi’o

The waters spring forth

To nurture the land…

Is the land of ‘Umialiloa

Calm as the sea…

One of the stunning sights in the Waipi’o Valley, is the waterfall called Hi’ilawe. This is also the name of a song performed most memorably by the late slack key guitar legend Gabby Pahinui. Expressed metaphors of nature, Hi’ilawe recounts the story of an ill-fated love affair.

After our time on the Big Island, we’ll fly to Maui and spend a few days in Lahaina. The cultural experience there is celebrating our 25th anniversary at the wonderful Plantation Inn, where we honeymooned so long ago (yikes!). The song Lahaina Luna, performed by the Brothers Cazimero, captures the sweetness of that first experience on Maui. The Brothers Cazimero perform my favorite version:

I am going to the island of the valley

Where the mountains are green

That’s where you’ll find me…

Then we take the road to Hana with its luxuriant plant life and abundant waterfalls for a three-day stay in a town that remains rustic and remote from the island’s mega-hotels. At the festival, we sang and played the country-western style Going to Hana Maui:

Up and down the hills and round the bend… 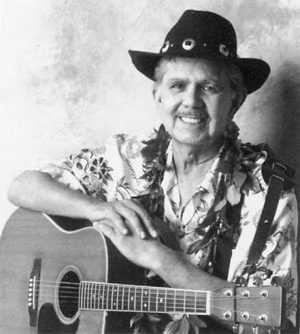 During our time on Maui, Haleakala will loom in the distance, but I doubt we will ascend the mountain again. Still, Haleakala, which we performed yesterday, brings to mind our last adventure viewing the crater:

One summer morning I took an early ride

To watch the sunrise in the beautiful sky

As it was rising I could see all my dreams

On top of that mountain – Haleakala.

We rose at 3:00am to join a few other brave souls in a jeep to ride to the summit and watch the sunrise. After gazing at the changing light on the moon-like crater in the teeth-chattering cold, we donned spacesuit-like coveralls and bicycled down the mountain. Very, very fast. I think I wrecked my bike’s brakes. As we descended, the temperature gradually rose and we removed layer after layer of clothing until we reached warm green ranch lands in Haleakala’s foothills.

At the base, we passed through Makawaou. The old cowboy town in the heart of paniolo country is our final Hawaiian destination. A Hawaiian cowboy tradition has existed in Hawai’i since the mid-19th century. In fact, a number of paniolo became world-renowned rodeo stars. Not surprisingly, songs of the paniolo emerged in the Hawaiian musical tradition. One of my favorites is Kaula‘ili as interpreted by the late slack key guitar master Sonny Chillingworth. The version on his album Sonny Solo opens with Chillingworth introducing the Hawaiian-language song in his deep, resonant voice:

This is a song about a Hawaiian cowboy riding on the slopes of Mauna Kea, the highest island mountain in the world, in beautiful Parker Ranch on the Big Island of Hawai’i. While roping cattle, he fell off his horse into one of the many lava tubes in the area and was badly injured. He managed somehow to crawl out of the lava tube and lived to ride again. This is his story.

After a few days in Makawau, we fly home to Southern California. It will be a wrench to leave Hawai’i although we will return filled with memories, many of them musical.

But will this trip unfold as planned? I hope not. If it did, I would have nothing further to report!

A TRIP TO THE ISLANDS: HAWAI’I BY SONGS