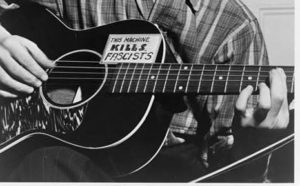 I can’t stop thinking about these two. I wonder what either of them would think about the state of the world today and, if they were still with us, what might they be singing about? Both are icons of American folk music who built their careers by challenging the status quo with their art.

Woody Guthrie was born in Okemah, Oklahoma in 1912 into a home where his father Charles Guthrie was a business man who was reportedly involved in a racist lynching in Okemah and later became a member of the Ku Klux Klan. Woody’s mother suffered from Huntington’s disease; because of this she was committed to a mental hospital by the time he was 14. By then, Woody’s father had left Oklahoma for Texas, so Woody and his siblings were left to find their own way in the world. Woody worked odd jobs and begged for meals to survive.

During the 1930s, also known as the “dust bowl” era, he found his way with other “Okies” to California. He became acutely aware of the difficulties faced by the displaced working class and began writing songs to call attention to them. He was able to sustain himself by performing and befriending like-minded individuals who were politically active in the socialist and communist movements of the time.

As he became better known, Woody traveled throughout the US and eventually landed in New York by the 1940s where he quickly became part of the large local progressive folk community. It was there that he met Pete Seeger and the two became fast friends, sharing a loft in Greenwich Village. It was also at that time that Woody wrote one of his best known songs “This Land is Your Land” in response to Irving Berlin’s “God Bless America” which he felt did not speak to his own experience as an American nor that of his contemporaries.

Woody Guthrie continued to write and perform during the 1940s and 1950s. He joined Pete Seeger, Millard Lampell, and Lee Hays in a left-wing folk group called The Almanac Singers; many others have included Guthrie’s songs in their repertoire over the years. Sadly, in 1952 he was diagnosed with Huntington’s Disease and his health continued to deteriorate until his death in 1967.

His friend Pete Seeger, along with many others, continued to carry on the tradition of folk music intertwined with social activism.  In the fifties, Seeger and other members of his musical group “The Weavers” were blacklisted during the heyday of McCarthyism which similarly impacted many other progressives and socialists. However, this did not deter him from continuing to write and perform. By the 1960s, the mood of the country had changed and his commitment to civil rights, the anti-war movement, and many other progressive causes was welcomed by the members of a growing counterculture.

As a young person in the sixties, I loved Pete Seeger’s music and the principles he espoused. Young girls like me, with our guitars and other instruments, played and sang songs such as “Where have All the Flowers Gone” and “If I Had a Hammer,” envisioning that someday our world would be a place where civil rights were guaranteed, poverty would be abolished, and war would be a thing of the past.

I love live music and you probably do too since you are reading this. One of the best live shows I have ever seen was Pete Seeger with Woody’s son Arlo Guthrie during the time they toured extensively in the mid-seventies. I am not going to recommend a specific YouTube link for this duo because there are a wealth of easy to find videos of them performing together.

On the day before the 2009 inauguration of President Barack Obama, Pete Seeger and Bruce Springsteen led an enthusiastic crowd in singing “This Land is Your Land” at the Lincoln Memorial in Washington, DC. Fortunately, you can see this wonderful and uplifting performance on You Tube:

Sadly, Pete Seeger left us on January 27, 2014, at the age of 94. May his legacy, and that of his friend Woody Guthrie, live on in the vast body of work that they left behind and in the social activism that they inspired.

A Tribute to Woody Guthrie and Pete Seeger

Why these two folk singers are still important today