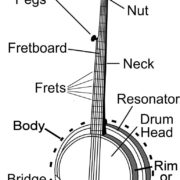 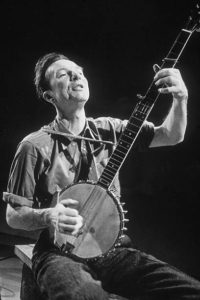 I don’t think that I’m alone when I say that the very first time I was totally captivated by the 5-string banjo, was the day I watched and listened to a lanky fellow named Pete Seeger climb onto a stage with his roughhewn, long-necked 5-stringed instrument with a somewhat soiled circular drum. His fingers danced across the strings with an easy loping rhythm as he sang.

“How does he do that?,” we all asked. It was the late fifties and this didn’t sound like what I was used to hearing from a banjo. Bluegrass hadn’t penetrated the urban centers to any extent yet, and when we city-folksters imagined a banjo, we pictured the traditional Dixieland band of minstrels, pounding the rat-tat-tat rhythms of Stephen Foster and the riverboat era of high powered music.

Yet, here was this lanky chap wearing combat boots and jeans, singing soft ballads like ‘Go Tell Aunt Rhody’, rhythmic folk songs like ‘John Henry’, with this magnificent drum head with what looked like a bowsprit attached, all the while accompanying himself with rolling waves of pulsating rhythms. Then, to whet our appetites, he haunted us with the songs from the Lincoln Brigade…’Venga Jaleo’…’Viva La Quince Brigada’…

It wasn’t long before many of us, yours truly included, purchased Pete Seeger’s instruction book on how to play the 5-string banjo and learned the innovative yet so simple finger patterns that turned and tamed the 5 string banjo into an accommodating sidekick for the average folk singer.

As time wore on, bluegrass bled its way into the popular music culture and fast-fingered musical geniuses wowed us with their blazing speed and dexterity. The Appalachian superstars, Earl Scruggs and players of his ilk began to penetrate urban listening centers, and as the folk era faded into history, new figures arose to dazzle us – Bela Fleck, Noam Pikelney, etc. With Pete’s passing, his gentle style gradually lost prominence and the 5-string banjo became the province of the virtuoso. Gone was the ‘everyman banjo’ that could accompany the average player singing Happy Birthday at family gatherings, and perhaps a few of the slicker folk songs, if that person were practiced enough. 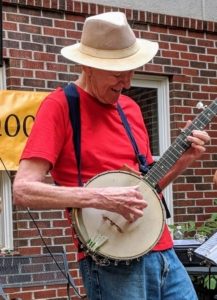 For those who don’t recognize the name, a brief search will reveal a life of service and dedication to the preservation of folk music and the joy that comes with being a part of a musical experience no matter how small. A founding member of the ‘Old Town School of Folk Music’ in Chicago, supporter of folk talent everywhere, and skilled folk musician in his own right (Frank was a member of the famed group The Weavers), Frank Hamilton has established a new school, branded with his unique experience in the honorable pursuit of bringing homemade music into as many homes and lives as possible. No, Frank’s pursuit is not to nurture the folk music superstars of the future, but rather to embrace the sheer joy of making music for anyone who cares enough to try. In Frank’s words (also quoted below),

“I believe that music is a birthright of the human species. Anyone who is interested in it should be encouraged to study it whether they consider themselves talented or not. If a person shows interest, that is the same result as talent. The greater the interest, the more the talent is enhanced. I also see music as healing. The sharing of it overrides division and enmity. It requires harmony and agreement. If people can make music together, they can learn how to converse with one another. Music is true diplomacy.”

Frank’s new school, The Frank Hamilton School, was founded in 2015 in Atlanta, Georgia, where Frank makes his home today. A more detailed chronicle of the how, when, where, and what appears at the end of this article.

What better way for Frank to demonstrate that he walks the walk as well as talks the talk, here is his generous link to a series of banjo lessons, for anyone who wishes to learn the method used by Pete Seeger to play the banjo. The teacher is Frank Hamilton himself.

Here in toto, is the remarkable missive from Frank that appeared in my email inbox. Word for word.

These are all ten of my lessons on how to play the five-string banjo Pete Seeger style. There’s a lot of material on Old-Time clawhammer and Scruggs bluegrass-style but it’s important to remember what Pete did which changed the way it was played. You can play and sing songs from all over the world using his style. He innovated the long neck five string which was used by popular folk music groups during the Sixties and Seventies. You don’t have to have a long-neck banjo to play in this style.

And as promised, a full description of one of the most unique and special centers for folk musicians, aspirants and believers of all ilks to gather:

I asked Frank to send me a brief history of his journey. I’ve attached Frank’s detailed response to this article with full knowledge that several of my readers know and respect Frank’s contribution and gift to the proliferation of American folk songs and American folk singers.

A quick visit to the new Frank Hamilton School

I encourage my readers to read it. The spirit of the teacher, the love of the universal practice of families and friends singing together, lives and breathes in his words.

A man and His Mission – The incredible Frank Hamilton

Added bonus: Free Banjo Lessons posted at the end of this article.