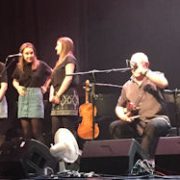 30 YEARS TOGETHER … STRUNG, DRAWN AND QUARTERED

I went to a remarkable concert last week—remarkable for a number of reasons. Hard though it is to believe, Phil Cunningham and Aly Bain are currently on a UK tour celebrating thirty years of playing together as a duo. Quite an accomplishment– as Aly and Phil said, their partnership has lasted longer than any of their marriages.

Aly is 70 now, and Phil is sixty-something, but their playing is as tight and exciting as it has ever been. They both can still play a reel at lightning speed, or a slow air that’s expressive and delicate. Best of all, it’s clear that they still love the music, love playing it, and love playing it with each other.

The 1200-seat Perth Concert Hall was filled to capacity, and as is often the case the average age of the audience was more than a smidge over 50. You can’t help but wonder what the state of traditional music will be in 20 years or so, when many of us will be gone. But that leads me to the second thing that made this such a remarkable concert—read on….

A few years ago, I started volunteering in the music department of our local secondary (high) school. My job was to work with a group of kids aged around 13 to 15, mostly fiddlers in the school’s ceilidh band, who had decided they wanted to form a smaller band to play a few gigs and compete in events like the local Gaelic Mod. They chose the name Strung, Drawn and Quartered and started working on a few tunes.

Time passed. They worked hard, practiced, and raised funds by busking in the tourist spots around our town. They started to get the gigs, entered and won their first competition, and eventually I told them that I was going to back off a bit. They didn’t need me at every rehearsal, and they could call any time they needed a bit of help.

Last year, they came third in the National Mod—a very big deal. Then they started getting invites to play at lots of parties, ceilidhs, and even provided live music behind a special silent movie presentation at the local cinema. Still, I was completely unprepared when they came to tell me about their latest invitation… to open for Phil and Aly at Perth Concert Hall!

Yep—same concert. And they didn’t just open; they shared the entire first half of the concert with another group of young musicians who sang Gaelic songs in lovely harmonies. These are the kids who, three years ago, I had to constantly remind to tune their fiddles and play a C-sharp when the key is A. They walked onto the stage like confident professionals, fiddles all in tune, played and sang beautifully, including some of their own arrangements. And the audience loved them.

As the concert ended, Phil and Aly brought both groups back onto the stage for an encore, and they all joined together to plan and sing Dougie McLean’s song, Caledonia, followed by a standing ovation.

I love Phil and Aly even more than I already did, for giving kids an opportunity like this. Half of them have now graduated and are heading away to their various universities or gap years. Most will be in nearby places like Glasgow and Edinburgh, so they are hoping to still play together. One of them is planning to study music; the rest are doing things like Math and French. They will never be a famous band—that’s not their goal. But they’ll remember this experience, they’ll keep on playing at home and in sessions, and I am no longer worried about the future of trad music… it’s in very good hands.

“A painter’s got a canvas. The writer’s got reams of empty paper. A musician has silence.” – Keith Richards

30 YEARS TOGETHER … STRUNG, DRAWN AND QUARTERED