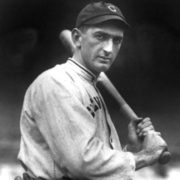 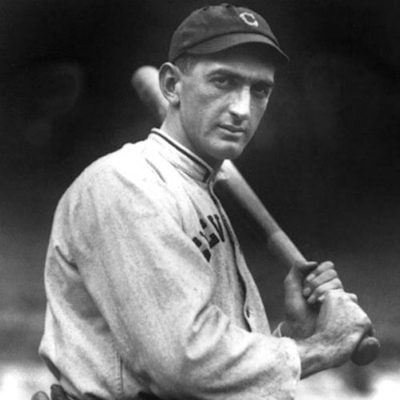 “Say it ain’t so, Joe,” said a heartbroken kid to the most famous baseball player of his time—the man who put his name on the scandal of the century, the Black Sox Scandal of 1919. Shoeless Joe Jackson, who was reborn in Field of Dreams, starring Kevin Costner and James Earl Jones, in the 1989 baseball classic named for Shoeless Joe, after the W.P. Kinsella novel. Did he ever say it? The story is probably apocryphal, only featured in one of the many films that mention it—Eight Men Out. Nonetheless, he should have said it—it’s one of those perfect sayings—real or not. He was coming out of the courthouse after the Grand Jury met, and the story goes that Shoeless Joe affirmed its truth, though later denied it ever happened.

“After the grand jury returned its indictments, Charley Owens of the Chicago Daily News wrote a regretful tribute headlined, “Say it ain’t so, Joe.”[20] The phrase became legend when another reporter later erroneously attributed it to a child outside the courthouse.”

Flawed heroes are always the best

Look at Satan in Paradise Lost

I wrote in my song Shoeless Joe. I learned that from my years in Literary Criticism, studying Stanley Fish, who wrote Surprised by Sin: The Reader in Paradise Lost. There is no better flawed hero than Shoeless Joe Jackson.

The Black Sox Centennial is upon us—the hundredth anniversary will be October 1 the beginning of what would have been the World Series 1919. How to remember it, that is the question. “Joseph Jefferson Jackson (July 16, 1887—December 5, 1951), nicknamed “Shoeless Joe,” was a star outfielder who played Major League Baseball (MLB) in the early 1900s.” (Wikipedia)

The first thing to know about him is that he was illiterate—and that was an essential part of his story. I wrote a song about him for my second volume of songs for the National Pastime—The Man Who Invented Baseball. Here are the lyrics:

He could hit and run and throw

But he couldn’t read or write

They called him “Shoeless Joe”

He was baseball’s white knight

But there he was in the middle of a fix

Not knowing how he got there

Kennesaw Mountain Landis did not care. [The first Commissioner of Baseball]

And no one remembers who won it

Charles Comiskey should have paid them more

We all know he’s the one who begun it.

Flawed heroes are always the best

Look at Satan in Paradise Lost

So much more interesting than the Lord

Taught Adam and Eve what that apple cost

When the Black Sox threw the 1919 Series~

He was the last player they couldn’t bribe or fix. (Ch)

Had he wanted to throw the Series

“Say it ain’t so, Joe” could have done better than that

All from Black Betsy—the only thing black was his bat

His .375 batting average led the league in triples

He tried to tell Comiskey but Charlie slammed the door

So he threw a Cincinnati Red out at home plate just to be sure. (Ch)

“Don’t you know me, Joe?” Ty Cobb once asked him

After visiting his liquor store

“A lot of them don’t anymore.”

Refused to reinstate him

After 95 years the third highest hitter in Major League history

Who never took a dive love or hate him. (Final Chorus)

It was Ted Williams who in 1998 filed the official request for baseball to reinstate Shoeless Joe to the National Pastime—which to this day has not happened. Both Bud Selig and Bart Giamatti turned a blind eye to Williams’ request. But not the Baseball Reliquary—who inducted Shoeless Joe into their Shrine of the Eternals—the Reliquary’s version of Baseball’s Hall of Fame in 2002. Jim Bouten—author of the 1970 classic Ball Four—called it the People’s Hall of Fame.

Mike Nola, who runs the Shoeless Joe* Society’s official website, which is called the Shoeless Joe Jackson Virtual Hall of Fame, summed up the facts of the 1919 series to show how unlikely it was that he had anything to do with it: “I’m here to tell you through all my research, there’s no way Joe Jackson had anything to do with the throwing of any games in the 1919 World Series. He batted .375; he had 12 hits, which was a World Series record; he made five runs; he batted in six. Joe accounted for 11 of the 20 runs that the Sox scored. He had the only home run. He played errorless ball. So those are not the statistics of a man trying to throw any games, in my opinion.”

Nola then addressed the issue of the $5000 that Jackson supposedly received for his involvement in the fix: “A lot of people say Joe received $5000. He didn’t receive $5000. The $5000 was left in his room by his teammate Lefty Williams when Joe wasn’t even present. Joe found the money when he came back to his room. He tried to give it back to Comiskey. We’ve got four letters where Joe tries to go to Comiskey over the winter of 1919-1920 to tell what he knows. All he wanted was Comiskey to pay his train fare. Comiskey was a cheapskate, to say the least. He did not pay his train fare because Comiskey was trying to cover up the fix to protect his investment in his players.” 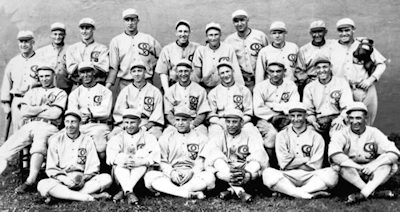 Mike Nola, accepting the induction of Shoeless Joe Jackson for the July 28, 2002, ceremony, was introduced by Executive Director Terry Cannon:

In introducing the first of the 2002 inductees, Terry Cannon observed, “Based on the first 12 inductees to the Shrine of the Eternals, I think a good case can be made that the voting membership of the Baseball Reliquary is an enlightened body, and this year’s election of Joe Jackson also exemplifies its compassion. And if I may speak for those members who voted for him, whether or not they felt he was party to the fixing of the 1919 World Series, I believe that they feel that Shoeless Joe Jackson has been punished long enough. And now, some 50 years after his passing, the time has come to lift the ban so that Shoeless Joe can take his place beside the other immortals in the Baseball Hall of Fame. And today, the Baseball Reliquary is indeed proud to have Shoeless Joe Jackson enter its Shrine of the Eternals.”

In closing, Nola thanked the members of the Baseball Reliquary for electing Jackson to the Shrine of the Eternals, adding, “It’s a very powerful message and helps our cause to get Joe’s name cleared.”

Now let’s turn to the original bootlegger—the other candidate for baseball infamy—the fixer himself, in his own words, Arnold Rothstein.

MY NAME IS ARNOLD ROTHSTEIN

That was my code of honor

“You stick to your trade~ I’ll stick to mine”

Is what I told the police

But you had to have some principles to run Tammany Hall

Bootlegger who ran the drug trade~ kingpin of Organized Crime.

You call them bootleg series to give them panache

But I was the original bootlegger during Prohibition

My name is Arnold Rothstein and I was shot before the crash.

When I testified before the Grand Jury

I took the 5th and refused to name names

They called me Mr. Big, The Fixer, The Man Uptown,

The Big Bankroll and The Brain

They all worked for me~ Meyer Lansky, Jack “Legs” Diamond,

My favorite office was Lindy’a at 49th and Broadway

Where I made bets, collected debts and watched the race results. (Ch)

Why would I fix the Series? I didn’t need the money~

I never offered to cancel the season like Kennesaw Mountain Landis

I never tried to run from a fight—my name is Arnold Rothstein. (Final Chorus)

But more to the point, the man most likely to have fixed the series was not the baseball hero who was incapable of reading or writing—and had twelve hits, a World Series record, hit .375, mostly triples, the only home run, and played errorless ball. It was the man who picked up the cash his fellow players left on the floor. His name was Arnold Rothstein.

*According to Jackson, he got his nickname during a mill game played in Greenville, South Carolina. Jackson had blisters on his foot from a new pair of cleats, which hurt so much that he took his shoes off before he was at bat. As play continued, a heckling fan noticed Jackson running to third base in his socks, and shouted “You shoeless son of a gun, you!” and the resulting nickname “Shoeless Joe” stuck with him throughout the remainder of his life. (Wikipedia)

Ross Altman has just completed The Man Who Invented Baseball: Volume 2 of the National Pastime, which includes Shoeless Joe. Volumes 1 and 2 are both available from The Baseball Reliquary.

Ross Altman has a PhD in Modern Literature from SUNY-Binghamton, is a member of Local 47 (AFM), president of the Santa Monica Traditional Folk Music Club; he writes for www.folkworks.org . Contact him at greygoosemusic@aol.com