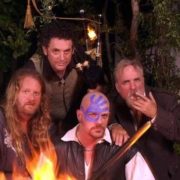 AND THE BEATS GO ON … 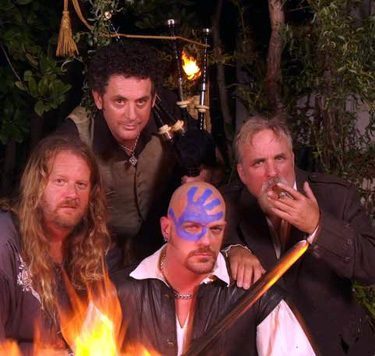 Some hear the clarion call of the bagpipes and the ears perk up, the heart races, and the sonority reverberates through the core. Even if you don't have a molecule of Celtic DNA in your spittle, everyone has a reaction to the echoing exhalations of the unique bag, chanter and drone instrument. When combined with the sonorous beating of drums and the unique bellow of the didgeridoo, something primal and immediate hits the psyche. Whether it's your cup of tea or mug of grog, Wicked Tinkers provide an invitation to explore those internal rumblings, subtle or undiscovered though they may be.

With RANT, Wicked Tinkers offer up one of their most colorful recordings. And, although there is no substitute for a live performance, pushing the volume control throttle of your sound system when listening to this recording will provide a close rendering of the group, at least sonically.

Yes, a good portion of Wicked Tinker music is the one-two punch of Warren Casey and Keith Jones flexing their sticks on bodhran, tapan, snare, floor tom, and djembe. And when they kick in on the rocking opener, The Dean Set or pound away on the title tune, one gets a big hint of the tribal percussion concussion you might get hearing them in the open air at your choice of Highland Games. In contrast, Jones can switch gears and pop the snare instilling a snappy and tasty pacing on the two strathspeys on Swing Set, while Casey can rhythmically pepper the bodhran on tunes like Donald MaGillivray.

Lead by the clean and clear piping of Aaron Shaw, who also writes or arranges the majority of RANT's sets, the album provides some standout tunes with some added guests weighing in along the way. Aaron's vocals on “Donald MaGillivray” stay perfectly on top of boom boys Casey and Jones' bodhran and floor tom hits and didgeridoo & Irish horn player, Jay Atwood, provides the snaking drone. In the mix is guest violinist, Michael Mullen, accompanying the high notes of the tin whistle with controlled flair.

There are even a few special treats in the collection, including one that features the Scottish small pipes, which is oddly enough called, The Small Pipe Set. This lively Shaw-penned set allows the piper to air it out on the smaller pipes over the rumbling beats of the djembe and tapan. The didgeridoo drone underscores the pipe melody and a trump (jaw harp) solo weaves in up front and back out again.

Speaking of the didgeridoo, the Atwood solo, Last Embers, does conjure up visions of not only smoky aromas of a fine Scotch whiskey, but the glow of an outback campfire, keeping a dingo or two at bay or perhaps mesmerizing an errant druid. However, it is the closing set, Shenavallie Farm, where the dirge-like march showcases the didgeridoo's hums and howls which chase the piping melody.

Another highlight features the swooning sound of the Irish uillean pipes which mournfully resonate on Eanach Dhuin, the opener for Pat Collin's Fancy. It then segues into an energetic rendition of the ever bouncy traditional tune, Maggie in the Woods. Sprightly bowings from Mullen liven it up even more.

On RANT, Wicked Tinkers sneak in their own brand of finesse and polish- even some luster on the lot, but without losing the ability to go all medieval on you. The wicked combination of lusty tribal beats and Shaw's lyrical piping, allows for many of the songs to possess a kind of burgeoning heat. Most songs have a tension; the pipes pulling and the drum and percussion along with Atwood's drones, pushing. It's a war where everyone wins and here, as in concert, the musical battle rages and rants on.

Yes, strangely enough, it all works. The multifarious RANT actually let's you listen to the band with all the trimmings, trumps and whistles, so to speak, laid down loud but clear and expertly produced by Scott Fraser, with added beads of sweat from Atwood and Thistlepricks Productions. However, if you get the chance, and with no small risk to your bookshelf speakers or car doors, crank the volume on RANT and be at one with your inner Tinker, wicked or otherwise.

RANT is a Thistle Pricks Production and available through www.wickedtinkers.com and cdbaby.com

Joel Okida is a struggling artist, struggling writer, and struggling musician. It occurs to him that life is all about the struggle. Fortunately, he did not take up acting. However, he's not half-bad as a zydeco dancer and the ability to make a mean gumbo and lovely walnut tortes has gotten him by.