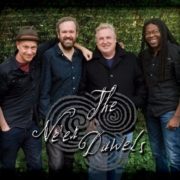 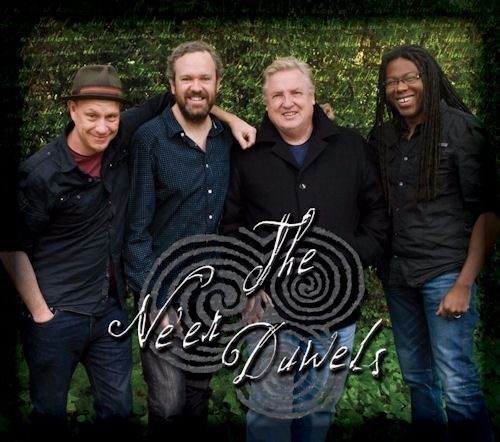 There are times when travelers on different paths meet at a crossroads and discover they have been brought together for a purpose. Connections are forged because each knows the road ahead is right and true. Such is the case with the band the Ne’er Duwels: four accomplished musicians who have joined together to create a solid recording.

Ken O’ Malley from Dublin, Ireland, is the lead singer of the band. Ken has entertained audiences for over 30 years, and is one of the most well-known and beloved Irish folk singers working today. His rich voice and skillful guitar work are fueled by deep passion for his people and their history. Ken pours his soul into every word he sings, every measure he plays, and the music of the Ne’er Duwels laughs, breathes, and aches with his dedication.

Patrick D’Arcy also hails from Dublin, and is one of the finest uillean pipers around. Patrick is also an accomplished pennywhistle and bodhran player. The depth and texture of his pipes and whistles are seamlessly woven into the fabric of the bands’ songs, providing a hauntingly beautiful quality. His Irish brogue on the songs he sings hark back to the wandering balladeers of old, and ties the bands’ music to its cultural roots.

Bryan Dobbs provides the backbone of the band. Originally from New Mexico, Bryan adds layers of ethereal threads with his mandolin, acoustic guitar, and lush mysteries from his Fender Stratocaster electric guitar. Bryan’s subtle nuances add color and shadings to the weft on the Ne’er Duwels’ loom.

Forrest Robinson is a Grammy award winning percussionist who has traveled the world and performed with many well-known artists. An alumnus of the University of Tennessee at Chattanooga, Forrest has always been drawn to the rhythms of Celtic music. He furnishes the heartbeat of the band, and he drives their sound with his modern, vibrant rhythms.

The band started two years ago when Ken enlisted Bryan and Pat to join him for a weekend of shows. The spark of creative fire flashed between them, and the flame was lit. Later Forrest attended one of Ken’s solo shows as a member of the audience, and mentioned he had always wanted to play with an Irish band. The hearth was laid and the blaze flourished into the Ne’er Duwels, with their own unique tone.

Their self-titled debut album also features Brett Anderson, leader of the Donnas, local artist Hale May, Ken’s daughter Angela, and Scottish actor/singer Kevin McKidd. There are Irish reels, original songs, and traditional Irish folk tunes, all infused with worldbeats as only the Ne’er Duwels can blend. As Pat notes in a poem recited in Ceol Miol Mor (Music of the Whale), the bands’ spirit comes from the night, the wind and weather, all of Ireland itself. The album closes with Saor Sinn o Olc, a song in Gaelic that returns the music to where it all began. The title of the song translates to “Deliver Us From Evil,” and is taken from the Lord’s Prayer in Gaelic, as are other phrases in the song’s chorus.

Take the time to share this journey with the Ne’er Duwels. No one truly knows where it will lead, but it is filled with beauty in every step and every moment.