THE BRICK: A ONE MAN MUSICAL 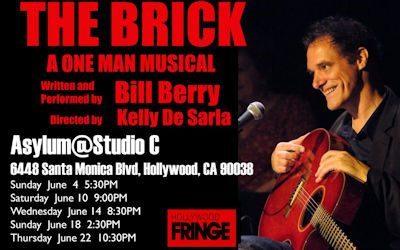 “When will you give up this clang-clang?” Bill Berry launches into a conversation with his imaginary mother. It’s heated at first. “You are wasting your life with this clang-clang! Always the bang-bang with the clang-clang!” – he mimics her chastising of his guitar playing when he was a child.

Guitar in hand, seated on a chair or wandering the stage, staring and talking to imaginary people without ever crossing the ‘fourth wall’, Bill’s Berry’s one-man musical show The Brick: A One Man Musical, named after one of Bill’s songs, is playing at the Asylum @ Studio C, 6448 Santa Monica Blvd., Hollywood, as part of The Hollywood Fringe Festival until June 20th.

That’s all it is and nothing more,

But you can tell a lot about a man

by what he uses his brick for.

…the song is from Bill Berry’s recent CD Awkward Stage, a standout among the flood of CDs released every year (make that ‘every week’) around the country. 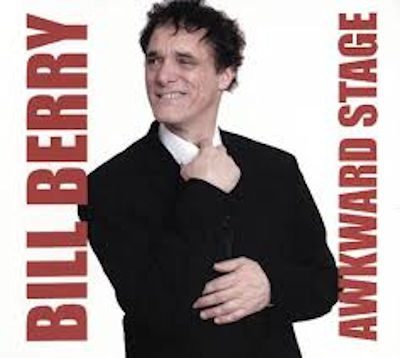 Rather than present himself as the ubiquitous lone figure with guitar standing at a microphone, The Brick is a conversation about Bill’s life and experiences in word and song. On their surface, most of the songs have little to do with each other (there’s a song about a piano tuner, one about a couple of crows, even one about STD’s) but somehow Bill Berry has brought them all together to paint a vivid picture of a man’s life. He takes us through an hysterically funny escapade with two of his boyhood chums (both were in the audience smiling on opening night), issues with his departed mom, and a journey through the years, loves events, and milestones that have made him who he is. The songs, some personal, some allegorical, all come together to paint a picture of a man coming to terms with his life. I don’t want to give away too much content here, but by the end of the show Bill manages to make the audience part of his family, spoon feeding us in music and lyric the stuff that makes a man what he is. Most of the songs contained in the show can be found on Bill’s CD Awkward Stage, first released in Spring of 2017.

The script and the songs were written by Bill and the show was directed by Kelly DeSarla. This is Kelly’s first directorial attempt and her talent for the craft is evident in the fine tuning that makes a great production. The show runs for a clean hour with no breaks and will most likely return to L.A. at some future date. Look for it when it comes back if you can’t catch it this time around.

“Yes, you can tell a lot about a man by what he uses his brick for”.

Additional Information on Bill, Awkward Stage, and The Brick can be found at Bill Berry’s website.

THE BRICK: A ONE MAN MUSICAL