A Record Album Interpretation
The Wooster Group: REDCAT Theatre in Walt Disney Concert Hall Complex
Thursday, January 31, 2019, 8:30pm
If I Had a Hammer 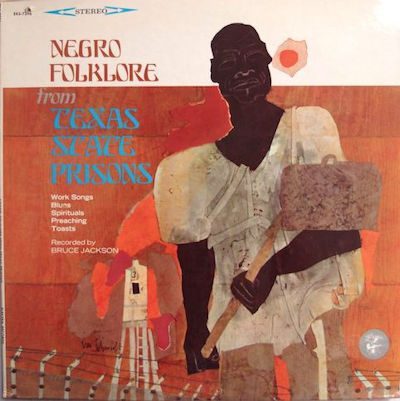 In 1935, thirty years before this album by historian Bruce Jackson was made, America’s original ballad collector John Lomax found his greatest single source in another Texas State Prison—Sugarland, Texas—where folk singer Lead Belly sang his first song for him—The Midnight Special. Like Jackson, Lomax had only primitive recording equipment—which he carried around in the back of his big blue Ford station wagon. Bruce Jackson was prepared for what he was about to hear—because he had heard it all before, in Lomax’s pioneering efforts, and Lead Belly’s example of an African-American prison work song leader.

Unlike the better-known concert artists such as Paul Robeson—who sang bass—and contralto Marian Anderson—Lead Belly sang a piercing tenor—and commanded the attention of his fellow black prison workers in the segregated Texas prisons—unchanged in the thirty years between. He would sing out a lead line:

That’s what was called a cross-cut song—the hammer, or ax—would cut the tree in two places, as the workers timed their “Wham” to Lead Belly’s rhythmic chant. When they used a hammer to break concrete on the chain gang, the rhythm was similar to the tree-cutting songs, where they followed Lead Belly’s lead lines, and punctuated each one with a collective “Wham” to actually do the work. Folk fans in the later 1960s could still hear Pete Seeger mimic these work songs with his long-handled axe—much like his long-neck banjo—coming down on stage with his emphatic “Wham!” to illustrate the way Lead Belly would have carried the song on.

It’s been fifty years now since I have basked in the glory of Pete Seeger’s authentic staging of African-American work songs—until last night at REDCAT (which stands for Roy and Edna Disney CAL-ARTS Theatre) in the Walt Disney Concert Hall complex at 2nd and Hope in the heart of downtown Los Angeles. It was a magnificent throwback to two distinct earlier times in American folk music history—real folk music, not a guitar on stage—from the mid-1930s and mid-1960s. It was produced by the Wooster Group originally from NYC, with Eric Berryman, Jasper McGruder and Phillip Moore; directed by Kate Valk, the amazing production design by Elizabeth LeCompte, with musical direction by Gareth Hobbs. “Nothing short of transcendent,” said The New York Times.

How wonderful to have seen it on January 31, the Centennial of Jackie Robinson’s birth in 1919, who broke the color line in major league baseball in 1947, right in between these two historic epochs, and on the eve of February’s Black History Month. The show will play through the weekend, and then move back east to the Wooster Group’s home base of Brooklyn for the rest of the month.

Bruce Jackson was a 28-year old would be Jewish folk singer when he took his guitar to the first of these Texas State Prisons inspired by John Lomax’s experience intending to learn some of their songs for his own repertoire. Jackson’s genius was in soon recognizing that he was not the person who should be singing their songs—he stumbled on a much larger story that needed the prisoners themselves to tell it properly—not a young folk singer. In a profound moment of epiphany, he put down his guitar and picked up a camera—and started filming and recording them. The result was this groundbreaking Elektra album, Negro Folklore from Texas State Prisons, recorded, edited and annotated by Bruce Jackson. The cast were the prisoners, featuring performances by W.D. “Alec” Alexander, John Bell, Louis “Bacon and Porkchop” Houston, Jesse “GI Jazz” Hendricks, James Johnson, Joseph “Chinaman” Johnson, C.B. Snuffy Kimble, Arthur “Lightning” Sherrod, Eddie Ray Zachary and others.

The brilliance in concept is that the play is exactly one hour long—and is like a vocalized pantomime of the album itself, with the three performers on stage doing all the singing of the work songs, blues and spirituals and (in the case of the topical commentary on JFK’s assassination and the preaching parody) the spoken sermon. On stage the audience sees the actual album (from Eric Berryman’s personal archives) spinning around the turntable, as the sound almost magically rises from the record grooves and is soon replaced by the full voices on stage—an illusion created by sound designer Eric Sluyter—just extraordinary.

The play follows the album in sequence, with prisons identified, in this order:

6. DON’T BE UNEASY Spiritual, The Walls

3. IF YOU SEE MY MOTHER Blues, Ellis Farm

4. JUST LIKE A TREE PLANTED BY THE WATER Worksong, Ellis Farm

5. SEE HOW THEY DONE MY LORD Spiritual, Ramsey Farm, Unit 1

The best description once again is from the prisoners themselves, this from an anonymous black inmate in the Texas Department of Corrections, circa 1964, from Wake Up Dead Man, collected and edited by Bruce Jackson:

“The way we do it, we do it by time. We have a steady rock. Everybody raise their axe up and come down at the same time, just rock. I guess that might a came from many a year ago. We see in the picture show the way Africans beat and paddle boats together, just work together.”

But the true genius of this album is how Jackson arranges the variety of African-American folklore so it is not restricted to just work songs, but includes spirituals, blues, cante-fables (story songs) and sermons. This keeps it from becoming monotonous and demonstrates the rich treasury of our folklore—both its secular and sacred sources, topical and timeless. It is one of the best single records in this regard, and transcends the material to become a work of art in Jackson’s arrangement.

This was created with the first recording devices at Jackson’s disposal, and did not allow him to go out in the field to do field recordings—which only became possible later. He had to be a director as well as a documentarian, and assemble each performance in whatever room or space was available—to create the appearance of real life work songs, and a church setting for the sermon-preacher. From one prison farm to the next, he would go out and listen with complete attention, to the prisoners in their day-to-day forced labor, to see what he wanted to recreate in his handmade mobile studios. It was an extraordinary creative achievement.

After the near-entirety of the album is thus recreated with the wonderful actors on stage, the final piece, Forty-Four Hammers, suddenly brings to life the original film/recording into the theatre at REDCAT—the smaller but just as wonderful world of Disney that Walt could never have imagined—a radical, whimsical and far from the beaten track avant garde uniquely Los Angeles twilight zone—which would have made Mickey’s creator turn over in his grave. The film that rivets our collective attention in the back of the stage is footage from “Afro-American Worksongs in a Texas Prison” by—bringing it all back home—Pete, Toshi and Dan (their son) Seeger, and Bruce Jackson, 1966. There you actually see the prisoners in their natural setting, in their prison uniforms, raising their heavy hammers above their heads—and one big collective “Wham!” If I Had a Hammer indeed.

And you wonder what made America great. No need to wonder~ World War II veteran Pete was there when it happened, and folklorist Bruce Jackson made sure we would never forget it. And thanks to REDCAT we can now relive it. If there is one play not to miss this year, get to this small miracle of a theatre on Hope Street and 2nd Avenue. Bravo!! Pete Seeger’s Centennial is upcoming May 3rd (1919); like Jackie Robinson, two Americans who made America great the first time—so it never had to be done again. REDCAT—like 2016’s Nobel Prize in Literature—is bringing it all back home. With thanks to Jac Holzman’s legendary Elektra Records—proudly displayed on stage throughout this magical performance. For more information visit www.redcat.org

FolkWorks Folk Roots Festival coming up next April 13, 2019, from Zimbabwe to Appalachia is inspired by these powerful stories and will build on them for what Pete called My Rainbow Race. There are many ways to volunteer and participate.

Ross Altman has a PhD in Modern Literature from SUNY-Binghamton; he is a union folk singer member Local 47 AFM; Ross may be reached at greygoosemusic@aol.com