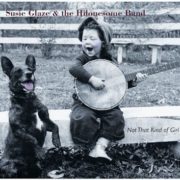 TITLE: NOT THAT KIND OF GIRL 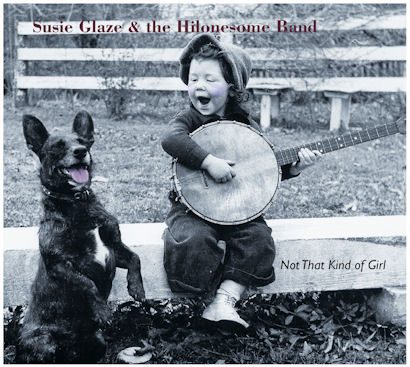 After three critically acclaimed CDs in the past 5 years, it is not surprising that Susie Glaze & The Hilonesome Band have created yet another memorable album. But Not That Kind of Girl is more than just “another.” It is, I believe, their best album yet…in part because this group keeps pushing their own boundaries…challenging themselves in terms of musical diversity, original songs and fresh interpretations.

Not That Kind of Girl is a potpourri of folk and Americana delights. While retaining their trademark Appalachian roots and Newgrass sound, Glaze and her band have expanded their repertoire to include songs that range from traditional to contemporary folk; from old-timey to country; from tender ballads to light-hearted humor. There’s even a bit of blues; some Caribbean rhythm; and a tribute song to Linda Ronstadt. And all these styles work perfectly together.

Half the songs are originals – the work of Hilonesome songwriter, Rob Carlson – and much of the diversity can be credited to his eclectic creativity. But what makes them flow so effortlessly together is the creative energy of the band itself and the amazing voice of Susie Glaze…a voice that can be simultaneously powerful yet playful and beautifully nuanced.

Accompanying this one-of-a-kind voice are the virtuoso talents of Rob Carlson on lead guitar and vocals…Steve Rankin on mandolin, bouzouki and vocals…Mark Indictor on fiddle and vocals…and Fred Sanders on bass and vocals. In addition, guest artists include the album’s producer, bluegrass icon Herb Pedersen, on banjo, lead and resonator guitar, and harmony vocals; Chris Hillman on mandolin; and Joe Craven on percussion.

The album opens with a stirring, spirited instrumental by Carlson called Independence – providing an exciting showcase for the soaring fiddle of Mark Indictor and the dancing mandolin of Steve Rankin. That is followed by another Carlson original, Not That Kind of Girl, an old-time, good-time sounds-like-a-classic number with Glaze at her all-time best, playfully tripping over the light-hearted lyrics. It’s such a fun, upbeat song – a true delight – enhanced by harmony vocals by Pedersen and Carlson.

Heartland, written by Denise Hagan, is a touching ballad of hard times and longing for home, illustrating yet another facet of Glaze’s sparkling delivery. Then the pace picks up again with David Olney’s compelling country song, Millionaire – a timeless and timely tale of greed and ruthlessness – sung by Steve Rankin, with Glaze and Sanders adding satisfying harmony. Fred Sanders then takes the vocal lead on Henry Hipkens’ That’s How I learned to Sing the Blues, as Rankin’s mandolin and Indictor’s fiddle impart an old-time swing sound to this retro-styled number.

One of my personal favorites on the album is The Mountain, a gorgeous “neo-traditional” by Carlson about the crime of mountain-top mining for coal. With Glaze singing lines like, “God made the mountain, only God should tear it down,” with passion and clarity, this is roots music at its best…further underscored by Herb Pedersen’s 5-string banjo.

Among other standout tracks for me was Dens of Yarrow, a haunting Scottish border ballad of love and death. Glaze captures the sad simplicity of this song with minimal accompaniment –– sometimes singing a cappella. The droning of an accordion (Skip Edwards) and a solemn fiddle recall the mournful sound of bagpipes, while Glaze’s vocal clarity and control lend authenticity and dignity to the narrator’s sorrow.

And, of course, there is the very special tribute song mentioned earlier: a beautiful rendition of John David Souther’s Prisoner in Disguise, which was made famous by Linda Ronstadt. This track features the touching mandolin of Chris Hillman, as well as lead guitar and harmony vocals by Herb Pedersen.

In all, this album is an ambitious project – polished to perfection. Susie Glaze could have simply chosen to stick with a more traditional set list. But then, as we all know, she’s not that kind of girl.

SUSIE GLAZE – NOT THAT KIND OF GIRL