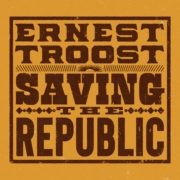 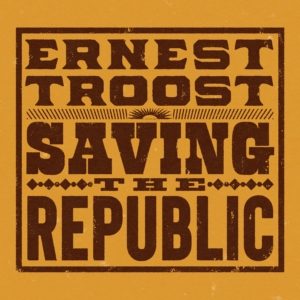 Born out of the dark years of recent times, with their legacy of greed, cruelty and lingering isolation, Saving the Republic is one of those rare albums that is both timeless and timely. The fifth folk album by Emmy award-winning composer and Kerrville New Folk Winner, Ernest Troost, it provides an unflinching reflection of our troubled nation while never losing sight of personal stories.

The result is a potpourri of 15 folk, folk rock, and ragtime songs – with a sprinkling of gospel, old-time jazz, blues, and ‘60s soul – that is alternately passionate, playful, political, and profoundly moving … and always memorable. While they convey an intimate understanding of the pain, sorrow and malaise we might be feeling these days, Troost’s songs still manage to hold out a note of hope, courage, and the need for intimate connection, even as they sound a “wake up” call.

As always, Troost’s celebrated musicianship is on display. Those who have seen Troost perform live already know: When he starts picking his iconic Piedmont blues-style guitar, there is magic in his fingers. But what some may not know is that Ernest Troost is an incomparable multi-instrumentalist. In Saving the Republic, he plays all the instruments (except the drums), including both acoustic and electric guitars, bass, mandolin, pump organ, percussion, shaker, and tambourine

This rich production is then augmented by the sound of trumpet, trombone and tuba … several beautiful harmony vocals from Nicole Gordon, plus one by Shaun Cromwell … and powerful drums by Gary Ferguson.

Lyrically, this album is equally unforgettable. Characterized by the poetry of simple speech – and Troost’s natural gift for story-telling – Saving the Republic is bookended by two recurring messages. The opening track, Feathers and Bones is a Piedmont-style blues tune that tells of a man born with psychic powers who seems destined to lead a solitary life until he meets a woman with similar powers. He says:

I turn coal into diamonds and copper into gold

Our future’s not fixed, that much is true

How it all unfolds is up to me and you.

The last track reiterates this need for love and comfort – achingly and poignantly – in a beautiful, tender song called Hold Me.

In between these themes, at the center of the album, is the title track, Saving the Republic. This deceptively playful rag, complete with the sound of an old-time tuba march, underscores the importance of every individual’s choice and voice, and amplifies that message in a larger political sense. Starting with one woman protesting on the street corner and ending with a million-person-strong demonstration singing on the White House lawn, this inspiring song celebrates the power of “one” in “everyone.”

There are so many gems in this album, I can only urge you to enjoy it for yourself. But here are a couple of my favorites:

The second track, I Might Be Wrong, is a country “ear worm” tune that tells of a marriage that has fallen apart, as symbolized by an empty, derelict house. It speaks of the storm of anger that spawned the break-up, the sorrow that followed, and the prevailing uncertainty over whether it was the right thing to do after so many years together. Each verse ends with the line, “But I might be wrong.” I can’t help feeling that this song is mournful metaphor for our nation as well, as evidenced by the lines:

It don’t seem like the sky is as blue

The Last of the Middle Class paints a powerful portrait of the economic inequity in this country today. A dark minor Piedmont-inspired blues, combining finger-picked acoustic guitar with a raw-sounding electric guitar and drums, the song describes the indestructible dignity of a destitute man who won’t stop believing in his rights. He is “the last of the middle class.”

With its driving folk rock beat, Before the Devil Finds Us Gone is an exciting song of escape, urging mothers, fathers and children to run from a terrible danger – an evil being who is terrifying and destroying everything in his path. It captures the fear engendered by the monstrous cruelty that is sweeping our land.

The same consciousness of endangered democracy is apparent in the next track, but with a very different sound. It’s Going to Happen Slow warns of the erosion of our personal freedoms in a groovin’  ’60s soul-style track. This chilling “wake-up” message is delivered by the full band, including the brass. It is, perhaps, no coincidence that its “groovy” ’60s sound is reminiscent of a decade that saw widespread social upheaval.

I should note, not all the songs on this album are political. There are old-time, good-time jazz numbers like So Much Rain, that describe an epic flood with humorous exaggeration:

There’s perch in my pantry and flounder on the floor

There’s alligators washed up on my front door,

Yeah, all my life I never seen so much rain.

And there are poignant songs about the loss of a spouse, or the search for true love, or the sad life of nineteenth-century mill workers who left the uncertainty of subsistence farming in the mountains only to find relentless toil and tedium in the mills.

But perhaps the song that moved me the most on this album was All the World Before Us. Dedicated to veterans, it is a beautiful song – underscored by warm brass and vocal harmonies – sung from the perspective of a bronze statue of a soldier looking out to sea. The refrain captures the heartbreaking sacrifice of so many with understated eloquence:

Here along the waterfront

‘Neath the twinklin’ of the lights

We once stood with all the world before us.

And when this refrain is followed, at the end, by a mournful, military-style trumpet – so reminiscent of taps – I was moved to tears.

Yes, this album has it all.