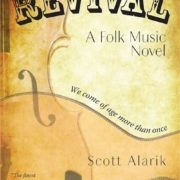 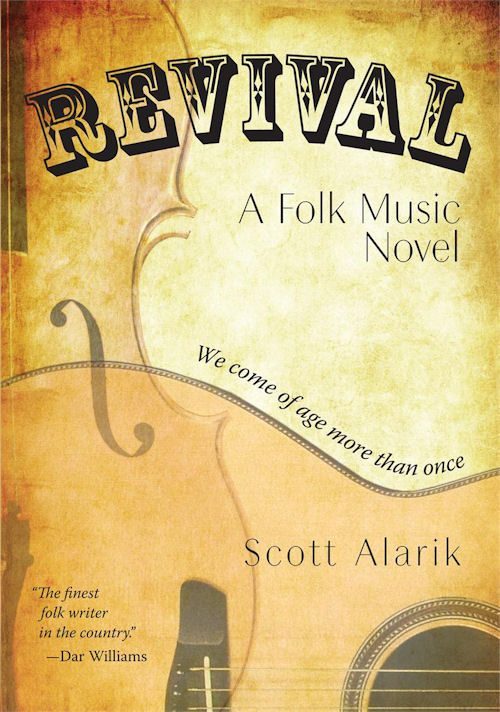 Scott Alarik’s folk music novel, Revival, is a love story, folk singer how-to guide and ideological manifesto wrapped up in one. This is not a testament to the book’s thickness but rather to Alarik’s fluidity as a writer. A folk musician and former folk critic for the Boston Globe, Alarik uses an informed and sensitive style to capture the perspective of Nathan Warren, a folk music hero with a tragic past. Through the thoughts of the fictional protagonist, the author offers his own revelations concerning the philosophical and practical elements of folk music culture.

The story centers around two musicians in the modern-day, Boston folk community. Nathan is a recovering alcoholic and washed up folk superstar who runs an open mic night at a Cambridge bar. Kit, a blossoming songwriter with severe bouts of stage fright, appears as the catalyst for his “Revival.”

The book trumpets codependency between the older generations and the newer. As symbols for their self-sustaining community, Nathan and Kit help each other realize their hidden potential. Seeing Nathan and Kit as allegories for their respective generations avoids the more fantastical read of the book – a older, bedraggled folk singer acquires a young, attractive lover, who fawns over his worldly wisdom. The details of their intimacy and personal growth serve to disguise the perennial truths beneath. When the two are abruptly torn apart by unforeseen circumstances, the author shatters the illusion of the surface story and lifts the disguises to reveal a greater fundamental truth.

Nathan makes for a thoughtful and kind protagonist. He takes pleasure in the small things such as listening to rain, taking walks in Cambridge Square and shoveling snow off his driveway. As part of his endearing disposition, he is easily infuriated by coffee machines and computers. Despite his vulnerability in the face of an email address book, he stands to offer invaluable wisdom to young folkies.

Kit Palmer, rosy cheeked and quietly ambitious, is a newcomer to the folk scene who, for our benefit, is introduced to the performance practices and styles by our self-effacing hero. Nathan, as his character readily admits, is overly philosophical and eager to educate his protégé. Though his long winded ardor overflows each chapter, the meticulous detail of his knowledge is what should make Revival appealing to folk musicians. That Woody Guthrie invented the word “hootenanny,” folk music church gatherings are called coffeehouses, and that Pete Seeger outwardly defied Franco, are a few of the fun facts that Nathan divulges. However, the drama illuminates more than just trivia tidbits. The relationship between Kit and Nathan reveals the process of becoming a successful and practical folk musician in a world of inflated, commercial dreams.

While Nathan shows Kit the ropes to becoming an off-the-grid musician, she flirtatiously educates him on modern communication. She builds him a website and shows him how to send emails, but he remains obstinate in his isolation. Yet this reconnection is the spark that will lead to his ultimate revival. With a new muse, a song begins to form in his thoughts, awakening Nathan from his dormant state.

Nathan acknowledges the spontaneous nature of his songwriting. Alarik supports the idea that music is a natural process that occurs within us, willing itself into creation so that we may see ourselves for what we are. From Nathan’s perspective, we witness the formation of words and melodies, stimulated by a repressed need. Though we may create willfully, as does Kit through her own ambitions, the best songs often arise unconsciously out of sheer emotional necessity.

Each moment and character of Revival has a wholesome charm that Alarik ties together with themes of community and belonging. Relatable characters like Jackie the skeptical bartender, Ferguson the sage-like critic, and Ryder the buffoonish wannabe show the author capable of great empathy and realism. Undoubtedly, Revival is a book that folk musicians and enthusiasts alike will read hungrily, devouring every musical anecdote and pondering along with Nathan the role of folk music today.

Revival is available on Amazon.com in soft cover and kindle downloads.

Jonathan Shifflett is a recent graduate of USC’s classical guitar program, who has since seen the light and traded the guitar for a banjo. When not tracking down train car murals or searching for hobo hieroglyphics, he enjoys pretending to play the fiddle and thinking about the folk music world at large.