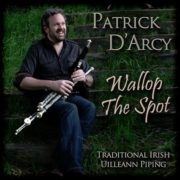 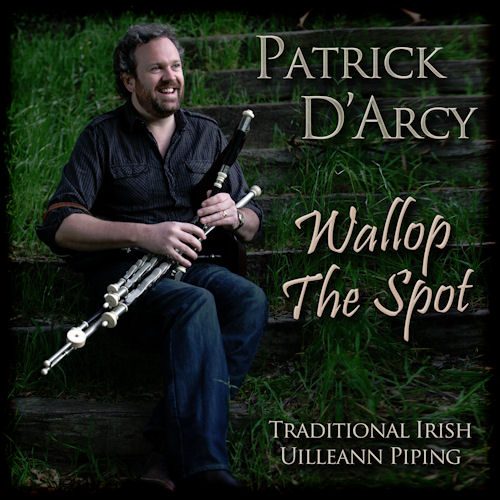 Originally from Dublin, Ireland and now resident in Los Angeles for a number of years, Patrick D'Arcy is a player of uilleann pipes, the complex, bellows-blown bagpipes native to Ireland. Initially starting his musical career on guitar and mandolin, D'Arcy was at one a time a member of the fledgling Irish Folk-Punk band Flogging Molly. However as his interest in a more traditional approach to the music gained momentum he left the group to focus more fully on his growing obsession: the uilleann pipes. And obsession it was. As he began to play the pipes more, D'Arcy (whose day job at the time was web design) launched UilleannObsession.com website, which quickly became a one stop shop for information on all things piping and, along with fellow Irish expat Gabriel McKeagney, founded the Southern California Uilleann Piper's Club. Today the club boasts dozens of members and the website has become one of the best resources for both beginning and experienced pipers searching for music, sets of pipes and piping history, anecdotes and lore. And now, after many years spent “wrestling the octopus” (as many piper's cheerfully refer to the infamously finicky and difficult instrument), D'Arcy has finally released a wonderful debut solo CD, Wallop The Spot, which is chock full of great playing tunes and tight playing. The album is a 'true' solo effort. It features only D'Arcy on pipes as well as a few brief sets on tin whistle and low whistle. The title of the album, by the way, refers to a notorious jig in the Irish repertoire of tunes.

On the CD, Patrick plays two different sets of pipes, a concert pitch set in D made by American master pipe makers David Quinn and Benedict Koehlor and a 'flat-pitch' set in B made by legendary pipe maker Geoff Woof. The lower, mellower tone of the B set makes a lovely contrast with brighter and punchier feel of the concert set and Patrick is fine form on both instruments.

The album opens with a set of reels on the B set and the characteristic creak of the bellows and slight groan of air typical of the instrument just before the drones kick in and the whole set rumbles to life. The two reels, Sporting Molly / The Dublin Lads, come from sources both contemporary and old, with the first coming from the playing of Dublin piper Mick O'Brien and the latter from old recordings of the late Willie Clancy. The track nicely shows off D'Arcy's command of the instrument, with the tunes played at decent clip but never feeling rushed. Indeed, there are few tracks on this album that could be called 'fast', with D'Arcy choosing to concentrate on presenting the tunes in such a way as to fully show of the full range and breadth of emotion and technique available on the instrument. Exhibiting a style that nicely slips in out of both legato and staccato (or “tight” playing in piper-speak) he shows a deft ear for careful articulation of the tunes and he builds nicely on his many years listening to influences of the like of Clancy, Liam O'Flynn, Seamus Ennis and many others.

A set of jigs (Cailleach an Airgid / Árd an Bhóthair / Cailín an Tí Mhóir) follows on the concert set and D'Arcy is able to use this set to really showcase his mastery of the use of the regulators, a component unique to the Irish pipes. A set of keyed pipes that lie across the piper's leg (13 keys on a standard 'full set' of pipes), they are generally played in pairs by the piper's wrist and the side of the hand and allow both held chords and rhythmic accompaniment to be played simultaneously with the chanter (melody pipe) and drones. This musical schizophrenia is the defining sound of the uilleann pipes and the ability to maintain all of those components at once is one of the marks of a master piper. A great example of this is his use of the regulators as a long, held out chord which drones over the opening bars of the third jig before transitioning into short, rhythmic phrases as the tune repeats.

The next selection is a slow air on the B pipes, The Green Fields of America, which Patrick plays with beautiful phrasing, building the regulator accompaniment over time and varying his use of chords and harmony across several different registers allowing him to set up and resolve some nice moments of musical tension.

D'Arcy also plays whistles both high and low and on track 4 he turns to a C tin whistle with a fling and a jig, again learned from the playing of Clare piper Willie Clancy. His interpretation of the tunes on the whistle is delightfully old school and remniscent of an older generation of players like Clancy and Micho Russell.

Later on, D'Arcy turns his hands (and breath) to the low D whistle and the air An Raibh Tú Ag an Gcarraig (Where You At the Rock?), learned from the singing of Seamus Ennis. Haunting and desolate on the low whistle, it presents a very different feel and character from the piping tracks.

The final selection on the album is a bit of a surprise. I won't say more about it other than it may take the prize for the most smile-inducing track on the CD!

A warning: this album is very much a piper's album and as such contains little to no effects and no backing instruments. This may be off-putting to those not overly familiar with the uilleann pipes but for pipers and lovers of the instrument this is a CD chock full of well-chosen and classic piping tunes, performed with skill and playful abandon. Rather than resort to the digital trickery available in the modern day recording studio, D'Arcy has decided to play the sets and instruments as they are, complete with the occasional squawk or shriek that plague even an experienced piper. This only adds to the charm of the recording, however, and shows what a real piper can do in real time with this often fickle but versatile instrument.

With Wallop The Spot, Patrick D'Arcy shows that his many years of practice and “obsession” with this singular instrument have paid off in spades and he joins the ranks of pipers who will be influencing and inspiring future ranks of players.

Zac Leger has toured, performed and taught music all over the U.S., Canada and Ireland, and currently resides in Los Angeles.  He has won numerous medals on various instruments from both the U.S. and Ireland, and is one of the few Americans to hold a prestigious All-Ireland medal on the uilleann pipes. Zac has recorded on over a dozen albums and has played, recorded and performed with numerous world-renowned musicians, including Eileen Ivers, Jamie Laval, and the Irish-based show “Celtic Crossroads.”