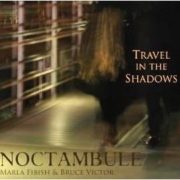 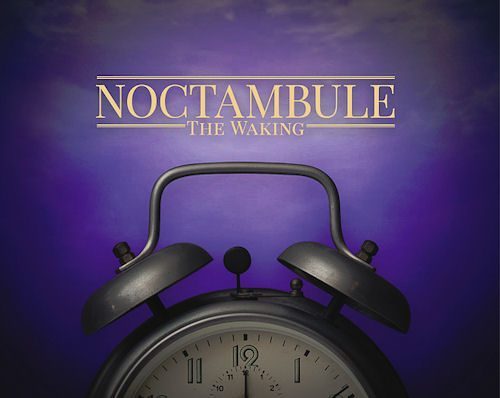 For those blessed enough to have journeyed through the nocturnal aural wonderland that was Noctambule’s (Marla Fibish and Bruce Victor) first recording, the question was inevitably, what happens when we awake from this intoxicating, mind altering musical dream? And here is the answer in the form of their second recording. The Waking takes us into a daytime world where all is changed; colors sharper, shadows deeper and clearer, sounds richer and more resonant with meaning and emotion, where time becomes malleable, now syrupy, now supple, now misty and ephemeral. This is magic.

Again, the recording quality is crystal, etched with the soul of wood; it lushly and brilliantly catches the hypnotic dance of strings – Marla’s mandolins and Bruce’s guitars, the singing butterfly calls of guest Nuala Kennedy’s flute and whistles, the haunting sighs of Jeri Jones’ slide guitar, the gorgeous deep deja vu tones of co-engineer Aryeh Frankfurter’s cello and violas, and the Vocals. The Vocals. Marla’s voice could charm faeries out of the air and make lions laugh. And Bruce sings like a conjurer, creating a mesmerizing blend of invocation and melodic wizardry that combines roguish humor with the sizzle of lightning going to ground. As with their first album when each sings backup to the other, their blend and rythmic timing immediately induces a trance of the most luxurious kind. 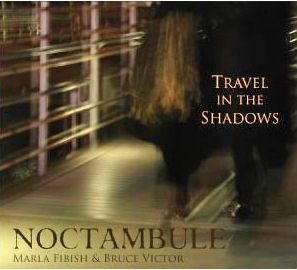 These songs are all poetry set magnificently to original music. Works of Sylvia Plath, Theodore Roethke, Stephen Vincent Benét, Jenny Joseph and Ted Hughes become mini-operas, exquisite excursions into daydream worlds, each complete and spacious and distinct but contributing to the whole – like taking a tour of a dozen regions of the land of the human soul. Roethkes’s The Waking starts in a sprightly mood, then opens subtly to vast vistas of questions personal and profound and softly, gently, insistently intriguing. Mad Girl’s Love Song by Sylvia Plath is darker, but the melancholy is infused with wonder and beauty. Auden’s If I Could Tell You invokes unnamed islands where time dances. Sally Dupre by Benét through the mediumship of Bruce is a love song to a haunting, with worldly laughter at the edges of the eyes, and a catch in the throat that betrays the deep heart anchor caught in the depths. Since I Was Begotten invokes the clear eyed promises we make to ourselves when young, with a musical scaffolding that suggests the beautiful futility of that vision. Ted Hughes’ September captures the feeling of those perfect moments which are tiny islets of timelessness in the middle of the vast natural tide of time’s inexorable flow. With Warning Bruce gives a loving, irreverent, bluesy invitation to live as though we won’t live forever. The album is started and finished with an instrumental piece by Marla and Bruce, called Bastardo that is a waltz of surpassing richness and depth, played sumptuously. And the other original instrumental, Out of Time , is equally beguiling, featuring, along with the symphony of plucked strings, Athena Tergis’ lithe lovely fiddle and Marla’s just right accordion.

If you can, get a copy of this recording. And if you can, listen to it in one sitting. You will be much richer for the experience.