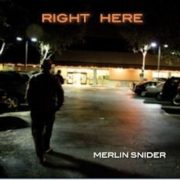 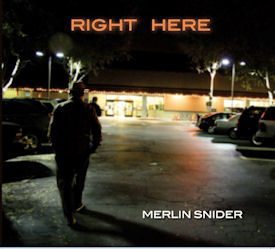 Merlin Snider’s first album Between came out in 1999 and to say the encore was a long time coming would be an understatement. Of course, to say it was well worth waiting for turns out to be belaboring the obvious. Right Here is captivating from the opening, picturesque, Central California love-song tour of Santa Cruz, to the thought-provoking hidden track No Advice at the baker’s dozen point.

He has assembled an outstanding group of musicians, authored a tremendous collection of songs, engineered an ultimately pleasurable listening experience and produced an album that will be a “must-have” for connoisseurs of the singer-songwriter, folk genre.

It’s really hard to pick favorites out of this work, and you will surely have your own, but I was particularly taken by the beautiful songs The First 25 Years and Ocean Song, the intriguing Yellow Moon, the real-life reminiscences stirred by Mama Don’t Work Here and Tall Trees, and the always-needed but seldom-heeded counsel of No Advice.

Of special note is the very pretty Henrietta, the real-life, tragic story of Merlin’s great aunt Anna who, after immigrating from Norway lost two daughters to illness, only to later lose two sons and her freedom to an alcoholic, abusive husband when he had her committed. Henrietta was her sister, Merlin’s grandmother.

In a blessed alliance with Tom Corbett’s mandolin, Mark Indictor’s fiddle, Jack Joshua’s upright bass and Deborah Snider’s outstanding harmonies, Merlin’s guitar work and smooth vocals find a happy place for serious music. Additional contributions by Chris Cairns, Eric Uglum, Larry Zack and several others make this a musical treat. I found myself thinking “there’s not a note that isn’t exactly where it should be.”

And, as well as the CD was mastered you can hear every one of those notes, a real engineering accomplishment. I had the feeling I was sitting right in front of the musicians on every song. Merlin and Eric can be satisfied that the product was well worth the considerable effort.

If you can’t make it to the CD Release Concert for this one, I strongly suggest that you see Merlin in person at the first opportunity and, if that’s not real soon, get a copy from CDBaby.com or www.merlinsnider.com, where lyrics are available as well.

Carl Gage is a singer-songwriter, musician and writer based in Simi Valley, CA.  He is seldom paid but overly-active in the acoustic music community serving as a director for the Topanga Banjo•Fiddle Contest and Songmakers, Inc., managing web sites for the FAR-West Folk Alliance, Songmakers and Topanga, emceeing on the main stage at Topanga and other musical events throughout the year, and writing occasional articles for FolkWorks, The Bard Chord and other publications. http://carlgage.com