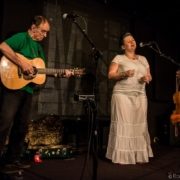 MARTIN CARTHY: THE GHOST IN THE ATTIC 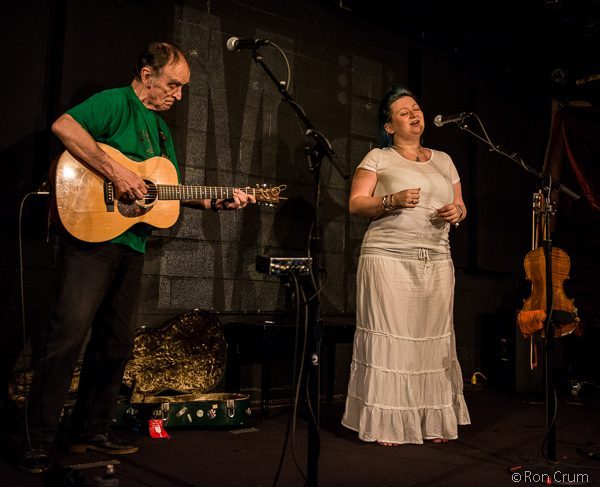 Are you going to Scarborough Fair? Not without Martin Carthy you’re not, Mr. Paul Simon; who stole Carthy’s arrangement and album title from the British traditional song for Parsley, Sage, Rosemary and Thyme. Nor was Bob Dylan dreaming when he wrote Bob Dylan’s Dream for Freewheelin’ in 1963; he too stole Martin Carthy’s arrangement of the British traditional ballad Lord Franklin’s Lament for the tune without credit. And don’t leave out Joan Baez; she too was poaching the king’s deer—for songs like The Trees They Do Grow High, and Queen of Hearts.

Bob Dylan, Paul Simon, Joan Baez—the King, the Crown Prince and Time Magazine’s Queen of Folk Music in 1963—they all had a ghost in the attic—and his name was Martin Carthy, England’s master folk singer and inventor of what is now called British fingerstyle guitar—born just three days before Dylan on May 21, 1941. Carthy and his daughter Eliza with Norma Waterson (co-creator of the all-woman British folk vocal group The Watersons) came to McCabe’s last Saturday and put on a show that captured the spirit of the last half century of the modern British-American folk revival.

If you thought the British folk revival began and ended with Ewan MacColl and Peggy Seeger you weren’t paying attention. Dylan, Simon and Baez were paying attention, and realized that it was Carthy who was going to carry them into the modern age where folk became a window to see through and not a wall to hang museum pieces on. That’s why they stole from him; as T.S. Eliot memorably said, “Bad poets borrow; good poets steal.”

Martin Carthy has played in more configurations than most musicians could imagine in a lifetime—producing significant work as a solo artist and as a member of The Watersons, Steeleye Span, Fairport Convention, Blue Murder and a half dozen bands and groups. His discography goes on and on, and just when you think you’ve reached the end of it another group appears with ten albums to its credit that Carthy somehow found time to make in between his other commitments. At 73 he’s now reached the age where albums like The Essential Martin Carthy have become available.

Carthy the proud papa brought his daughter Eliza to McCabe’s to show Americans where their folk music came from—and did they ever. Yeats’ great line, “Their eyes, their ancient glittering eyes, were gay” (before that grand old word got poached as well from the old English vocabulary Yeats got it from) describes Carthy to a tea—English Breakfast Tea I presume—as he peered down from McCabe’s royal stage—courtesy of their concert maestro Lincoln Meyerson whose every delighted word in his charming introduction showed how proud he was to bring him back after several years absence, “We’re so happy to see all his old friends here tonight—referring to legends in their own right like Van Dyke Parks and Mitch Greenhill—the local cognoscenti of folk (Mitch for example is head of Folklore Productions and co-founder and lead guitarist of String Madness).

After the show I felt like I was shaking hands with the Magna Carta that 800 years ago freed the English from the Monarch—right down to his initials; Martin Carthy, Magna Carta. When I asked him about its influence in folk music his eyes lit up all over again, and he started quoting some English poaching songs—celebrating the right of outlaws like Robin Hood to the King’s deer, “for they belonged to one and all.”

The show’s true revelation was Carthy’s modest and conscientious determination to pass on the lore of where his songs came from in that early folk renaissance of the 1960s—the traditional singers we had never heard of until now. Where, for example, did he learn Scarborough Fair, before Paul Simon learned it from him? He was only too happy to tell us—from lead miner and traditional singer Mark Anderson, whom none other than American folklorist Alan Lomax discovered and recorded in 1953. But the tale doesn’t stop there: for who introduced Lomax to Anderson?

None other than Scots/British folk singer Ewan MacColl, which shows you why Ewan and Peggy were at the center of the British folk revival—just as her brother Pete was at the center of the American revival—they weren’t just the stars, they were the invaluable links on the chain—and the chain led back to the once anonymous informants and traditional performers whose birthright this music was—and for whom the occupations of “lead miner” and “traditional singer” were not a difficult choice to be made at some crossroads in life where the road not taken became the defining moment on an artistic journey—but rather the proud designation of an artist who was also a worker—and had to be both to make a living—and a life worth living.

It was that essential perspective on folk music that Martin Carthy brought to his quiet but thrilling concert, and demonstrated what a great folk concert could and should be—a window that illuminates the songs that were born not in a Greenwich Village record shop, but down in the lead mines of the English working class—and the original sources that brought them out of the mines as surely as the lead, coal and gold they brought to market.

It was only in the second half of the concert that Carthy started telling these profound stories of the etymology of folk, with as much delight and love as a grandfather for his grandchildren, so we could in turn pass them on to the next generation. What a gift! It was only then that I started to wonder why Carthy and his violinist—vocalist daughter Eliza—the image of her mother Norma Waterson—were dipping into the Joan Baez Songbook this late in the game; until it finally dawned on me that I had the American cart before the English horse; he had put them there in the first place.

But the folk tradition is by no means a museum in their hands; they are not presented behind glass with “Do Not Touch” on the sign; indeed, one of the most powerful songs of the night was the traditional Irish antiwar lament Mrs. McGrath—which Pete Seeger sang and recorded in its original form, but which Martin Carthy has updated and reshaped into an antiwar song about Iraq, Afghanistan and the Taliban; it was mind-altering and breathtaking, a living song that brings the tragedy of an old war into today’s world, even as it continues to reflect the war that first inspired it. Indeed Carthy invites us to hear it as its original audience would have heard it—as an angry protest song about events everyone was talking about—as well as singing about. Carthy restored the song to the living tradition—a masterpiece of renewal as well as musical archaeology.

Martin and Eliza Carthy created a remarkable musical conversation between his British finger-style guitar playing and her amazing violin playing—too instruments that kept weaving in and out of each song’s brilliant arrangement so that the whole was greater than the sum of its parts. For the encore in fact they dispensed with the song stories that Eliza dubbed “The Descent Into Hell Tour” for one particularly tragic love song that wound up like Hamlet with a stage full of dead bodies at the end and performed their one pure instrumental of the evening, which brought the audience to our feet in a standing ovation of appreciation for a great duo we were privileged to hear.

Another highlight for me put us back in the world of the Napoleonic Wars: A Grand Conversation About Napoleon Arose—which brought the little tyrant to life from the commoner’s perspective and which Carthy performed soul-searchingly a capella—England’s most influential finger-style guitarist choosing instead to emphasize the sheer drama of the storytelling over the music. It was Shakespearian in its grandeur.

Even the way Martin Carthy thanked us for our rapt attention and enthusiasm throughout the show was singular and embodied his British heritage; several times he simply bowed his head and spoke quietly into the microphone: “Thank you very much indeed.”

That last “indeed” said it all; thank God we made peace with the English after the Revolution; for their tradition of law going all the way back to the Magna Carta, and their ballad tradition going all the way back to Bonnie Prince Charlie (of whom Martin Carthy sang and spoke like a contemporary) and the Robin Hood ballads (such as The Rufford Park Poachers) he quoted from like a preacher quoting the King James Bible is truly the gift that keeps on giving. We are all—from our nation’s biggest stars to its common folk who carry on the tradition in grassroots folk clubs and informal hoots across the land—in his inestimable debt.

As we walked out of McCabe’s glorious back room at the end of the concert I heard a recording I seemed to know from what Yeats called “the deep heart’s core,” English folk singer and composer Cyril Tawney’s sea shanty The Grey Funnel Line, as performed exquisitely by Martin Carthy and The Watersons. It carried me into the night, singing.

Thank you McCabe’s and Lincoln Meyerson for bringing it all back home. I was never prouder of what McCabe’s has meant to contemporary folk music than I was last night.

Thank you very much indeed.

MARTIN CARTHY: THE GHOST IN THE ATTIC