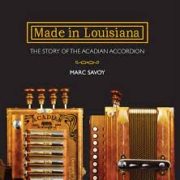 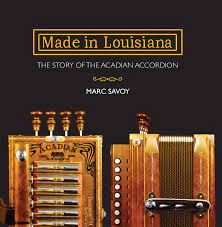 What a bargain! Priced at $45 + S/H, this is a Swiss Army Knife of a book, written from inside the host culture and told straight out by an articulate bilingual speaker. Marc Savoy grew up the rice expanses of Cajun country, fascinated with the instruments the workers played. These hardworking people were his own family, friends and neighbors. The fields stretch for miles in swampy fen and oozy plain, they got alligators and mosquitos down there, and gumbo to make your mouth smack a week after you eat it. And thousands of francophone rice workers of graded hue, who play old fashioned music on old fashioned instruments. M. Savoy took it upon himself to remake their squeezeboxes so they give the most bang for the buck, using careful modern methods. This hundred twenty-three-page book is the record of him doing so, and his motivations for doing so, asserted unapologetically. Thank you, sir.

His is a stripped down, non-show-biz Cajun music, just the waltzes and two steps of his youth, even as he grew smack dab up into the middle of it. Emanating from this one individual and his family is a managed and mannered Cajun Revival so successful it has worldwide reach. As he says, music is the glue that holds the social scheme together, not to mention the eats. That’s key for me, the underlying reason behind what Utah Phillips called The Long Memory, one that reaches back before you were born, that you can be proud of, and that you can pass on. Marc grew up in a neighborhood within an area within a region within a state that had some deep agreements about what music is supposed to sound like, across all sorts of lines.

Marc Savoy spent his teen years searching out the secrets of the Sterling, Monarch and Globe accordions that his friends and relatives played. In doing so, he sought to recreate the sounds he heard from the old 78 records on the tail-twister phonograph at home, the very sounds that came from his neighbors’ accordions. But dig the attitude: describing the playing of Hiram Courville, considered the best in Marc’s boyhood environs, he says ‘he was a very gentle and humble man who considered himself to be a mediocre player. His music was such a natural part of himself that he couldn’t attach any more importance to it than to anything else he did.’ Take note of that. It’s a theme of this book, and a life lesson

Along the way, you learn about Marc’s dogged pursuit of the perfect squeezebox (it is, trust me on that), the origin of free reed instruments way back, how a national park somehow suddenly managed to appear right near his hometown, now coincidentally celebrated as the heartland of this lively, lovely music. It’s got some sensible advice about how to learn and play it (total immersion from early on is the best way, but all are welcome), its past and its future. Beware, there’s a certain amount of discipline involved (um, I teach this kinda stuff), but it’s worth the effort.

Furthermore, there is no more welcoming group of folks. They’re not showy, they’re just good.

University of Louisiana at Lafayette Press

Made in Louisiana: The Story of the Acadian Accordion by Marc Savoy