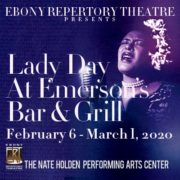 “LADY DAY AT EMERSON’S BAR AND GRILL” by LANIE ROBERTSON

“THE BEST SONG OF THE 20TH CENTURY” 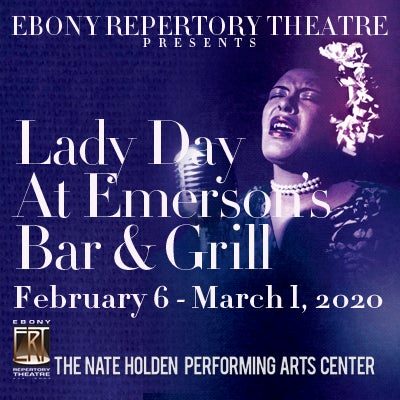 Four months before she died at the age of 44, Billie Holiday gave one of her last performances at Emerson’s Bar and Grill in Philadelphia, the city where she was born. Her birth name was Eleanora Fagan (April 7, 1915 – July 17, 1959) although she was known as Lady Day, the name given to her by saxophonist Lester Young. Lady Day at Emerson’s Bar and Grill is the name of the show currently playing at the Nate Holden Performing Arts Center in South Los Angeles. The musical drama is inspired by and explores the life of the legendary singer and stars Karole Foreman as Lady Day. It was written by Lanie Robertson and premiered in 1986. The current a magnificent, moving production is directed by Wren T. Brown. Sixty years after her passing Billie Holiday remains “one of the most transcendent artists of the 20th Century,” and this play with music has been produced on many stages here and in London and even made into a film. Stephan Terry is the music director and performs the role of Lady Day’s undaunted pianist Jimmy Powers.

Billie Holiday had been used to performing at venues like Carnegie Hall, so one would assume that a place like Emerson’s Bar and Grill would strike her as a tremendous let down, but on the contrary she much preferred small clubs to large halls—where she could reach out and talk to her audience—as Foreman does here, as Lady Day, from beginning to end—letting us in on her tumultuous life with band leaders like Artie Shaw and Benny Goodman, earlier singers like Bessie Smith, and her mother Sadie, “the Duchess,” who bought her first records.

When we first meet her she is already dying—though it’s not clear she knows it—of cirrhosis of the liver brought on by her alcoholism—she drinks throughout the play, punctuating every song with a pause to take another drink. But that’s only half the story—she is also addicted to heroin—like Lenny Bruce—before there was a Synanon where one could get help. Her first boyfriend and pianist, Sonny Monroe, (with whom she keeps confusing her accompanist Jimmy Powers) is the one who got her hooked on drugs.

But the reason I have admired BillieHoliday’s work—and worship her as an artist—is not the tragic melodrama of her life—it’s the same reason everyone else has—she broke the sound barrier in the sense that she broke the color line. Strange Fruit—the song about lynching—was voted “The Best Song of the Century” by Time Magazine—in December of 1999—when they put Einstein on the cover as the “Person of the Century.” Only they miscredited the song to Billie Holiday who sang it—not to the Jewish English teacher from NYC who wrote it—Abel Meeropol. And even that requires an explanation. You see—Lewis Allan—who is the credited author in the sumptuous program book—was the pen name of Abel Meeropol, who with his wife Anne, adopted the orphaned children Michael and Robbie of Ethel and Julius Rosenberg after they were executed at Sing Sing prison in Ossining, New York for espionage in giving the secret of the Atom Bomb to the USSR in 1951. They were executed for spying on June 19, 1953 and their young children adopted by the Meeropols. He wrote Strange Fruit a long time before—but Meeropol still felt the need of a pen name to protect his songwriting identity from the Hollywood inquisitors who launched the blacklist in the 1940s. Meeropol would go on to write The House I Live In, with Earl Robinson. This is not the subject of the play per se, but since it is still on Time Magazine’s cover, I want to correct the record whenever the subject of Strange Fruit comes up.

One other story is worth highlighting. Though Holiday was the first to sing it, she was not the only performer to do so—indeed many have since. But the blues singer who put his own stamp on it as well was guitarist Josh White. He sang it once at Café Society in NYC and was told afterward that Billie Holiday was backstage and wanted to meet him. Well this was big news to Josh—who like everyone else looked up to Billie, and very much looked forward to meeting her. He went to his dressing room and knocked on the door. When he finally entered he walked up and introduced himself—whereupon Billie reached into her purse and pulled out a knife. Oh my—he wasn’t expecting this. What had he done? “I don’t want you singing my song.” With a knife in her hand, she meant it. What could he say? “Billie—why don’t we both sing it—until nobody has to ever sing it again.” Suddenly her visage changed, and he won her over.

Blood on the leaves and blood at the root

Pastoral scene of the gallant South

The bulging eyes and the twisted mouth

Scent of magnolias sweet and fresh

Then the sudden smell of burning flesh

Here is a fruit for the crows to pluck

For the rain to gather, for the wind to suck

For the sun to rot, for the tree to drop

Here is a strange and bitter crop

According to the play, Billie Holiday desperately wanted to have children, but she never did. However, another of her signature songs is one of the great songs for children of all time—a song that indelibly embodies this desire. She singles out these two songs as her favorites, by noting that one time she didn’t feel like singing them and was practically fired for leaving them out of her set.

Them that’s got shall have

Them that’s not shall lose

So the Bible said and it still is news

Yes, the strong gets more

While the weak ones fade

Both are included on Billie Holiday’s autobiography Lady Sings the Blues from 1956 where she makes a point of saying that she is not “a blues singer, but a jazz singer.”

Billie Holiday would always sing Strange Fruit at the very end of her concert—not wanting anything to come after it. In the play Karole Foreman sings it at the end of what amounts to the first half, though the play does not have an actual intermission. After giving a haunted, mesmerizing performance Billie does leave the stage though, and Jimmy Powers excuses her with the explanation that she may be having some problems—perhaps she needs a fix. That’s when he takes his “Blues Break.”

When she returns she asks him for the gardenia to put on her hair. Only then is her costume complete—“Lady Day” without the gardenia is somehow not complete. And that’s when she goes into the most memorable story of the play—her experience of being at a night club in the Deep South and needing to go to the bathroom. To hear her explain her personal situation to an unforgiving hostess with a strict Jim Crow policy who is unwilling to let her relieve herself is heartbreaking in the extreme and makes you realize what Lady Day was up against and what segregation really meant far more explicitly than a sign saying “No Colored Allowed.” That’s when her tale of heartbreak rises to the level of true heroism and you appreciate why she created something permanent.

It wasn’t just her voice, or her songs—as great as they were. It was “the content of her character”—Lady Day—Billie Holiday—was truly a giant who earned her place in the American pantheon. And Lanie Robertson’s play celebrating her artistic legacy—Lady Day at Emerson’s Bar and Grill— brings her brilliantly to life. The standing ovation at The Nate Holden Performing Arts Center was every bit as compelling as the one I heard at the Ahmanson Theatre. Bravo to its stars Karole Foreman and musical director Stephan Terry, and director and founder of the Ebony Repertory Theatre—Wren T. Brown!

Special thanks to Patty Onagan and Gayle Hooks for the press pass and second row Center Orchestra Seats; Lady Day at Emerson’s Bar and Grill plays through March 1!

Ross Altman has a PhD in Modern Literature from SUNY-Binghamton (1973); belongs to Local 47 (AFM); heads the Santa Monica Traditional Folk Music Club; writes for FolkWorks; Ross may be reached at greygoosemusic@aol.com

“LADY DAY AT EMERSON’S BAR AND GRILL” BY LANIE ROBERTSON