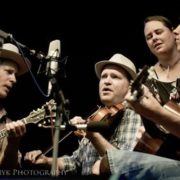 TITLE: DEVIL IN THE SEAT 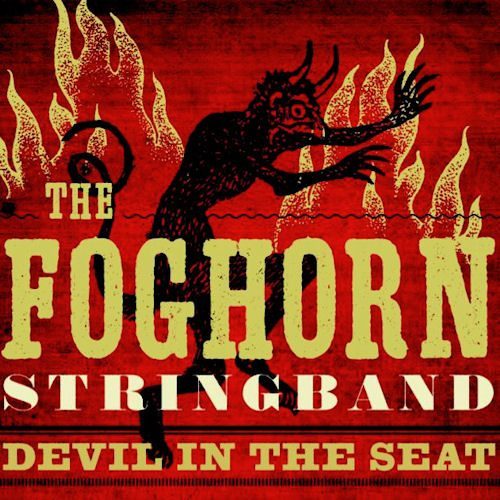 The Foghorn Stringband began as five guys playing hard-driving old-time music. Two of them, Caleb Klauder and Sammy Lind, formed the Foghorn Duo. Nadine Landry then joined on vocals and bass to make them a trio. Reeb Willms added her guitar and voice to make the Foghorn Stringband what it is today. All four sing powerfully, and they play hard-driving music featuring Sammy’s fiddle and Caleb’s mandolin, among other combinations. This is the eighth Foghorn release, and it certainly lives up to the standards the band has set for itself. It was recorded in Hawaii, but it’s full of hard-driving music and edgy singing.

There are 16 cuts on this recording. They start with Matokie Slaughter’s version of Stillhouse and then Reeb and Nadine sing Hazel and Alice’s Mining Camp Blues. Caleb then sings Columbua Stockade Blues. Then it’s on to the fiddle tune Old Molly Hare and the Child ballad, Henry Reed, sung by Caleb and Reeb. They play two fiddle tunes from Clyde Davenport, Lost Gal and Chicken Reel. They do John Hardy and then What Will We Do, which is an a capella duet sung by Reeb and Nadine from the British group, the Silly Sisters. Longing for a Home comes from the powerful gospel group, the Cooke Duet, and Reeb and Caleb certainly do it justice. The late Garry Harrison wrote Jailbreak. Pretty Polly gives Sammy a chance to sing lead. They got their version of Paddy on the Turnpike from Fiddlin’ Powers. Leland’s Waltz was written by Tim Foss, and Hank Snow is the source for Nadine’s rendition of 90 Miles an Hour. The last number is Chadwell’s Station. It was played by David Russell Hamblen who died in 1893. Hamblen’s music was rediscovered in recent times.

If you listen to old-time music, you have probably heard Foghorn. In that case, you know how good they are, so my job here is simply to tell you that this recording is wonderful compelling music with soulful singing and playing to match. If you haven’t heard Foghorn, then you are in for a treat.

FOGHORN STRINGBAND – DEVIL IN THE SEAT