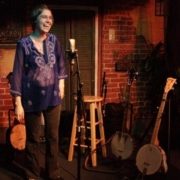 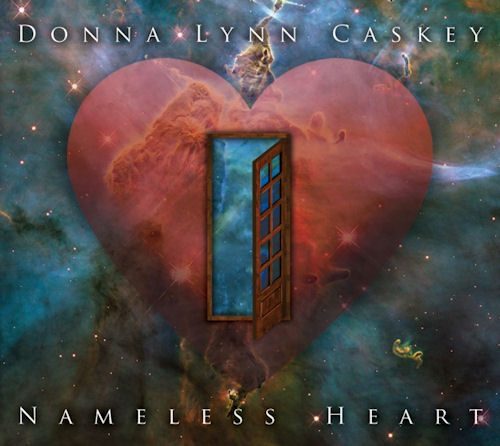 A poet’s task is to name the world; as Woody Guthrie proclaims in his World War II song The Reuben James:

What were their names

Tell me what were their names

Did you have a friend on the Good Reuben James?

and maintains in his ode to the (at the time) nameless “deportees” that went down in The Plain Wreck at Los Gatos:

You won’t have a name

When you ride the big airplane

All they will call you will be deportees

and Bob Dylan celebrates in a children’s song Man Gave Names To All the Animals. So when Donna Lynn Caskey bravely calls her new CD Nameless Heart, it of course invites one to start thinking up names for it, as if it were a baby.

What’s in a name? This naming task, you see, is serious business; Donna Lynn Caskey’s Nameless Heart is no exception. This old-time banjo player with a radically new personal vision of what it is capable of, comes close to naming it herself in the nearly heretical song Good News, which may be taken as her personal gospel:

Pannin’ for gold in muddy water

Good news is there’s gold in the mud

Good news is there’s gold in the mud.

Indeed she does consistently find “gold in the mud,” just as Irish poet W.B. Yeats foretold in his classic poem of despair, The Circus Animals Desertion:

I must lie down where all the ladders start

The foul rag and bone shop of the heart.

That is where Caskey’s efforts at transcendence, transformation, finding love, and dreams of aspiration—Jacob’s Ladder—begins: in Yeats’ idea of the foul rag and bone shop of the heart. That’s where she is digging for gold, and as she says, “there is gold in the mud.”

How many songwriters will tell you they have Diabetes? Or that they were diagnosed at 15? Caskey does, in her most personal song on the album, Who Will Care?

I’m in pain and I got no way to pay

The welfare office turned us away

Who will care for you and me?

Anything is possible I do believe

Anything is possible I do believe

Diabetes since the age of fifteen

No insurance will cover me

I’m dying of a treatable disease

Treatment it is a luxury.

To get down to where Yeats said “all ladders start,” one almost needs to leave the world of singer-songwriters and go back to Yeats’ world of modern poetry—to the confessional poems of Sylvia Plath. For Donna Lynn Caskey consistently respects Robert Frost’s distinction between poetry and protest: Protest, said Frost, is about our “grievances;” poetry is about “our grief.” Caskey’s twelve new songs navigate this treacherous boundary and steers clear of protest for its own sake; she is far more interested in exploring our grief. And that clarity keeps her songs from falling into despair, self-pity or political rant. Think of them rather as profiles in courage.

In Lost Before Found she confronts the death of a lover head on:

Lost before I ever found you

Twirling in circles around death the thief

Lost before I ever found you

Time cast a shadow between you and me

Hair in tangles past your shoulders

Cotton dress to the knee

We danced barefoot on the damp grass

Then you slipped away from me.

In Slot Machine she addresses the gamble that is love:

I gamble while you ramble

And in They Go On she both laments and celebrates the war-torn dead and those they leave behind of the title:

She’s home alone with the babies

He’s off at war far away

She thinks to herself how life doesn’t match

The romance of their first summer days. 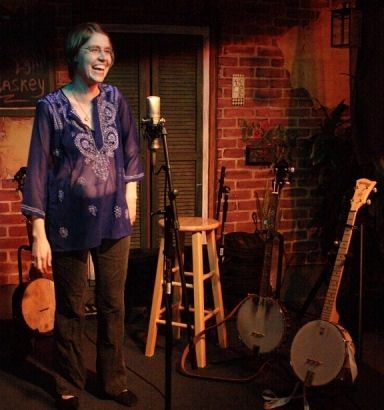 And finally, in the closing song Worthy, she calls to mind some slender threads of hope where Ishmael found it (in the Book of Job), “And I only am escaped alone to tell thee;” that is, in simply speaking your truth and telling your story:

Take your place beside the fire

Worthy, we are worthy

Speak your truth, tell your story

In all our shame in all our glory.

Her final line, “In all our shame in all our glory” captures Yeats’ “foul rag and bone shop of the heart” in its twin commandments of facing the shame to eventually climb into “our glory.” That, after all, is Caskey’s “gold in the mud.”

But it is not sufficient to reduce this wonderful new folk album to its underlying premises and ideas. For Nameless Heart is the album of an accomplished musician—a banjo player of extraordinary skill and imagination. Donna Lynn Caskey is a Magna Cum Laude graduate of the John C. Campbell Folk School in Brasstown, NC, where she received a scholarship to take the class “Clawhammer Banjo by Ear.” Her old-time roots are evident throughout, but she has taken the banjo into a vast new territory as well, where her songs often modulate between major and minor keys, shift rhythms without hesitation, and always find the perfect note to meld tune and meaning together into a seamless whole.

As Emerson said to a certain Good Grey Poet who had requested him to review his first edition of Leaves of Grass: “I greet you at the beginning of a great career.”

For further information about the show and her CD, including all lyrics, see www.donnalynncaskey.com/

On Sunday, May 25 Ross Altman will be honored by the Chinese human rights organization the Visual Artists Guild for his song Tiananmen Square, which he will sing in Chinese. See his May/June column Tiananmen Square for details and reservations.

Ross may be reached at greygoosemusic@aol.com