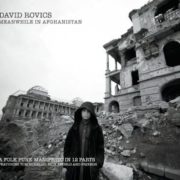 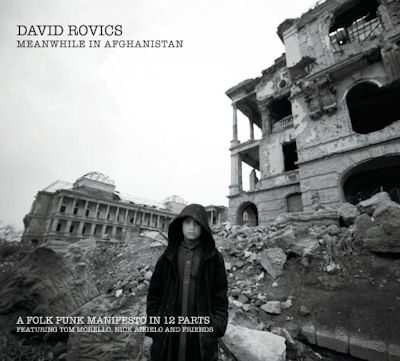 After more than ten years and counting, America under Bush and Obama are still bogged down in the graveyard of empires, the quagmire of Afghanistan, with another two years to go, and no one is asking why.

Well, almost no one; David Rovics, a one-man musical occupation, places that question front and center in his new album, Meanwhile In Afghanistan—which speaks truth to power, both here and abroad.

If you are on the left then you already know and admire Rovics’ work, the “musical version of Democracy Now,” according to Amy Goodman; if you are in the mainstream then you probably have not, a problem Rovics himself addresses on the album’s final song: Why Don’t They Play You on the Radio? He is Fox News’ worst nightmare—an eloquent, articulate people’s artist who has the facts on his side and takes a stand.

So let’s not quibble: Rovics is the a folk singer for the converted; for disaffected Americans who haven’t admired their president since perhaps Jimmy Carter; for disaffected Israelis who don’t like Netanyahu and believe, like Jimmy Carter, that Israel is an Apartheid state only to be compared with South Africa during the imprisonment of Nelson Mandela. Rovics speaks for the 1%–but a different 1%–the one per cent who voted for Jill Stein of The Green Party for President. Like her, Rovics political philosophy may be summed up in the phrase, “a plague on both their houses.” “Republicrats and Demoblicans,” he calls them—the two parties that control the political debate in this country, or as another author calls them—the Plutocracy.

Actually, though, David Rovics has a larger audience than Jill Stein does; he has amassed over a million hits on his web site’s various lyric pages. That puts him in Eugene Debs’ territory: the man who ran for President from a prison cell, after coming out against American involvement in World War I, and got over a million votes.

If you substitute hits for votes, Rovics is a third party unto himself—he is against war; against Empire, against injustice; for the common man, for Occupy Wall Street, for the Universal Soldier who he regards as another victim of America’s constant war economy; for a thousand small activist groups on four continents who keep him touring under the radar screen of big media and big festivals. He performs for fewer folk audiences than for political audiences. Like Mencken, he comforts the afflicted, and afflicts the comfortable.

David Rovics is the grassiest of grassroots performers—a voice for the oppressed working class—who for the most part don’t even realize they are oppressed—which is why they join the angry white male Tea Party and vote for a candidate and his running mate who have little more than contempt for them.

David has been at it for twenty years now, since 1992, and shows no signs of slowing down. If you wonder what happened to the protest music of the 1960s, look no further; pick up his new album, to be released on December 1st, and breathe some fresh air.

He once signed a concert poster for me during his Halliburton Boardroom Massacre tour with his brief but trenchant personal motto, “Aim high and throw hard.”  Keep throwing.