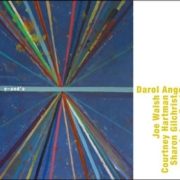 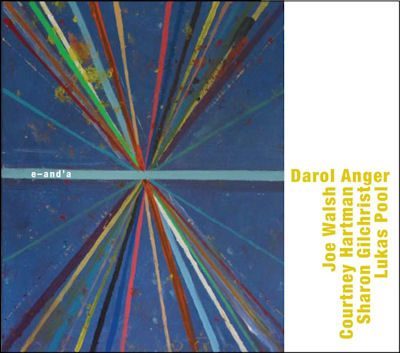 Darol Anger is one of the giants of new acoustic music, from being the fiddler in David Grisman’s quartet more than 30 years, to cofounding the Turtle Island String Quartet, to his own current band Republic of Strings. While influenced by traditional music, his arrangements are eclectic and complex, fusing many different styles of music. The emphasis on rhythm, in particular rhythmic chops (but very complex rhythms, not just offbeat chops as a bluegrass mandolinist would do), is a hallmark of his style.

His latest release, E-and’a is a very energetic CD that follows along his path. The title is a pun referring to 16th note syncopations, as many people subdivide measures by counting: One e and-a, two e and’a, three e and’a, etc. Despite his reputation for eclecticism, this CD has a cohesive bluegrass-influenced sound, while it still hits many different styles instrumentally.

The CD starts off with a fun tune called The Gravel Shore which has a very bluegrassy feel to it, as does most of the CD. However, Gravel Shore still has a nice arrangement throughout the solos. The next tune slows it down a bit with Farewell to Trion while still maintaining a nice groove.

Throughout the CD, there is the basic instrumentation: guitar, fiddle, mandolin, bass or banjo. There are some exceptions. Track 6, La Ville Des Manteaux is reminiscent of Darol’s older work and eclectic arrangements. It starts off with a hypnotic riff, played on a fiddle and marimba-like sounds (I don’t know what instrument that could have been) in different octaves. Then, the melody comes in played by the guitar. The tension builds as more instruments come in. Then, it relaxes into a more familiar, bluegrass form when the fiddle takes the melody.

The next track called Pogo Big, reminds me of the traditional Celtic reel, The Merry Blacksmith” (especially the A-part). However, it is played in a very American bluegrass way with a banjo, fiddle, mandolin, and guitar, each having its own moment to solo (whereas in Celtic music, instruments stick to the melody).

The last track, Grey Owl, is originally a Metis (Canadian Aboriginal) tune and learned from the  playing of Bruce Molsky. Darol has nicely adapted it in a more American way. It isn’t really bluegrass, just bluegrass-influenced. Here is a video with Britany Haas and Lauren Rioux (who was in Darol’s band Republic of Strings), both of  whom he has mentored. However, they start singing part way through, while Darol’s CD is all instrumental.

I took classes from Darol when he was a guest teacher at Alasdair Fraser’s Valley of the Moon Scottish Fiddle Camp in 2009 and 2010. In 2009, he exposed the camp to Brazilian Chorinos, a style that no one had played before. He was brought back the next year, and taught the camp an arrangement of the surf-rock tune Walk Don’t Run. Although neither surf-rock nor Chorinos are typically played on the fiddle, Darol made fun arrangements that worked very well with the large group.

Overall, the CD is very enjoyable. It nods to other styles and traditions, while still having a cohesive bluegrass groove.

Anya Sturm is a middle school student in Santa Monica and likes playing music almost as much as playing soccer. She started playing fiddle at age 3 and has since won first place on fiddle, guitar, and mandolin at the Topanga Banjo Fiddle Contest, the Goleta Old-Time Fiddlers Convention, the California State Old Time Fiddlers Association, and the Seaside Scottish Fiddle Contest.