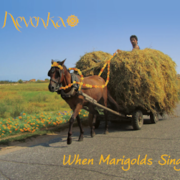 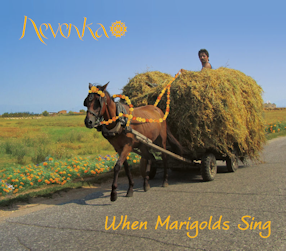 The roots of this outstanding album lie in the 1950s when those of us then alive and in our late teens and 20s attended hootenannies with Pete Seeger, Sam Hinton and others—folk was in the air. At the same time, Tanec of Macedonia and Kolo of Serbia toured the United States in 1956 giving us a taste of the musical and choreographic wonders the Balkan nations could provide, and at the same time the appearance of the Monitor albums featuring Lado, the Croatian State Ensemble of Folk Dances and Songs, and the Philip Koutev Choir all combined to create a heady time for young Americans who had never heard these sounds before. The first attempts to recreate those songs and dances resulted in the formation of a number of ensembles in the United States, largely peopled with young non-native Anglo Americans eager and thirsty for this activity. I remember several attempts to replicate Lado’s signature arrangement of Ladarke; we spent hours attempting to sing in that vocal styling that Lado so masterfully performed.

Three quarters of a century later, and the next two generations of this movement, under the musical and artistic direction of Trudy Israel, have produced a dazzling musical album: When Marigolds Sing: Nevenka Volume 4. Nevenka’s new album reflects all of these developments and that history in some way remaining faithful to what drew us to this music, most reflected in their Bulgarian songs over which they have absolute control, while on the other hand, Nevenka has entered new territory: Georgian, Rom, Sephardic, and other challenging musical genres.

Many of the vocalists who appear on this album danced and sang in the AMAN Folk Ensemble, while others are the daughters of former members of AMAN. This bodes well for the future of Eastern European music, because a new generation is as excited to learn and perform this music as those of us who began in the mists of time. For those of us who were attracted to this music through the edgy vocal timbres, the rich harmonic textures, and the driving rhythms, this album will not disappoint.

Trudy, as musical and artistic director has always had high standards seeking interesting music, demanding accuracy and excellence in the musical production. She has, over the years, shown that she has the ability to grow, and reach for ever-increasing vocal challenges for her ensemble.

Overall, the album is interesting on a number of levels: the variety of musical genres—Russian, Ukrainian, Bulgarian, Macedonian, Bosnian, Rom, Serbian, Georgian—give the listener a breadth of vocal and musical styles. Also, Trudy demonstrates her musical savvy in her selection of a variety of outstanding solo voices, and she groups the selections that feature solos, duets, trios, and larger groups. When the full ensemble sings they match the best in Bulgaria. The musicians who accompany the selections play with authority and provide interesting musical arrangements to enhance the vocal music. But, it is the vocal music that dazzles.

Another of Trudy’s strengths is that, through the years, she has not hesitated to reach out and bring in native artists to teach and train the company. In this album, for example, she and her ensemble clearly benefitted from the expertise of Tzvetanka Varimezova and the late Mirjana Lauševi.

Perhaps because our earliest experiments and performances were out of the Koutev repertoire, as well as receiving training by artists like Varimezova, Nevenka shines in the Bulgarian selections in the album: the glorious harmonies, interesting instrumental arrangements, and a command over the vocal techniques, set the Bulgarian selections in a class by themselves. Jujnak se Vikna, Pilentse Pee, Rano Ranila both in vocal production and when they use instrumental accompaniment, the result is radiant.

Another genre of music featured on the album are Russian songs, in which the company demonstrates true authority, matching many of the vocal timbres that one can hear on the JVC World Music Collection’s Soviet Union section. Susie North, the soloist in the song, Kak Pod Jablonju, sounds as if she stepped out of a Russian village.

Two other genres stand out in this collection: Georgian and Rom. Fans of Eastern European music generally find Georgian music startlingly beautiful, but we tend to hear large male choruses perform it. This album features four Georgian songs, and all of them are beautiful, and generally more intimate than their male counterparts. Mival Guriashi, Lalos, and P’irimze are particular standouts.

The Rom songs, solos, duets, and small vocal groups are particularly arresting. Full of authentic passion and intensity, yet performed with restraint and elegance, with the guitar and solo voice of Leslie Yeseta standing out, these songs round out the album.

Two songs that particularly delighted this reviewer because they had two totally different effects: Selo Moje, a stark, piercing Bosnian song, in which the ensemble demonstrates their vocal techniques that have a true village quality, and the joyful Vo Naše Selo a Kosovar Serbian piece that serves as the finale of the album and will delight every listener and make both old and young feet itch to dance, completes a carefully curated musical journey.

And for those of us who began this journey a half century ago, this album and its talented, well-trained ensemble gives us the strong feeling that every step of that journey was worth it.

Anthony Shay is associate professor of dance and cultural studies at Pomona College in Claremont, CA. He is the author of seven books, including Choreographic Politics: State Folk Dance Companies, Representation, and Power, which earned the Outstanding Scholarly Dance Publication in 2003.