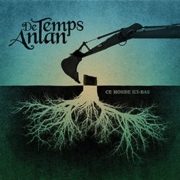 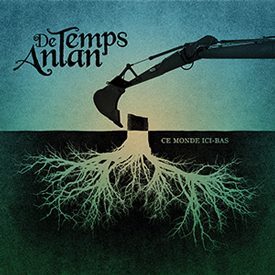 De Temps Antan, an energetic trio from Quebec, just released their third CD, which is entitled Ce Monde Ici-Bas. I love their first two CDs, have had their first since it came out in 2008, and have listened to those CD’s countless times. I have been looking forward to their latest release. In the age of the Internet, I could get it onto my computer the very day the band released it in Quebec. I was not disappointed; the last CD (or set of MP3s if you buy them electronically) is as good as the others and I like all three CDs equally well.

De Temps Antan are Éric Beaudry, André Brunet and Pierre-Luc Dupuis who have been exploring traditional tunes from Quebec’s musical past and performing together since 2003. All three sing (in French) and the instrumentation includes fiddle, accordion, harmonica, guitar, bouzouki and a number of other instruments. Many of the vocal tunes are in a call-and-response style. As they explain, this is typical of songs at parties where one person will sing a verse, and the others will sing the last phrase, and the refrain. There are a number of those examples on the CD.

Quebecois music is very rhythmic, but the ubiquitous percussion going on is not a drum. Instead, it is complicated dance-like foot tapping. Many of us tap our feet to the beat while we play, but in Quebecois music, that is taken to a whole new level. The basic beat is a stomp with the right foot flat on the downbeat, then a softer toe tap on the upbeat, followed by a left foot toe tap on the “and” of the upbeat. DUM duh duh DUM duh duh. There are many variations of that and syncopations, while singing and simultaneously playing the instrument. Éric is the main one who will do the foot tapping. The others often will add to the foot tapping by coming in to make it louder, or stomping their foot on the downbeat to emphasize it. An example of this is in the 2nd track on their CD, Medley des Couches. Here is an example of the medley , with Stephanie Lepine.

While I like the songs on the CD, my two favorite tracks are instrumentals. The first is a set of Quebecois reels from various artists that they found on archive recordings at Laval University in Quebec City. Their entitled this set Les 3 Archets, or The 3 Bows after the 3 different fiddlers whose reels they adopted. While the reels in isolation would not seem to fit well together, De Temps Antan add funky bridges between them (one almost like a rock-style riff) and a coherent new piece of music emerges. It has a lot of energy, too.

My favorite track, however, is a bit mellower and a more romantic valse, although not sappy and with a somewhat Cajun feel to it. It is not a traditional tune, but a new composition by Andre called Valse St-Severe. He wrote this tune for his own wedding. It is fundamentally a two-part tune, but there are variations and a fancy call and response bridge that give the tunes additional flair. I learned both Valse St-Severe and Les 3 Archets from Andre at the Valley of the Moon fiddle camp; exactly the way he plays these tunes on their CD. The CD was not finished then, so I didn’t know that those tunes would be on it. It was a wonderful surprise.

You can purchase this CD at http://detempsantan.qc.ca/en/boutique/.

Anya Sturm is a middle school student in Santa Monica and likes playing music almost as much as playing soccer. She started playing fiddle at age 3 and has since won first place on fiddle, guitar, and mandolin at the Topanga Banjo Fiddle Contest, the Goleta Old-Time Fiddlers Convention, the California State Old Time Fiddlers Association, and the Seaside Scottish Fiddle Contest.