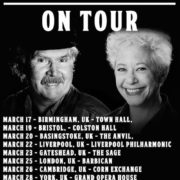 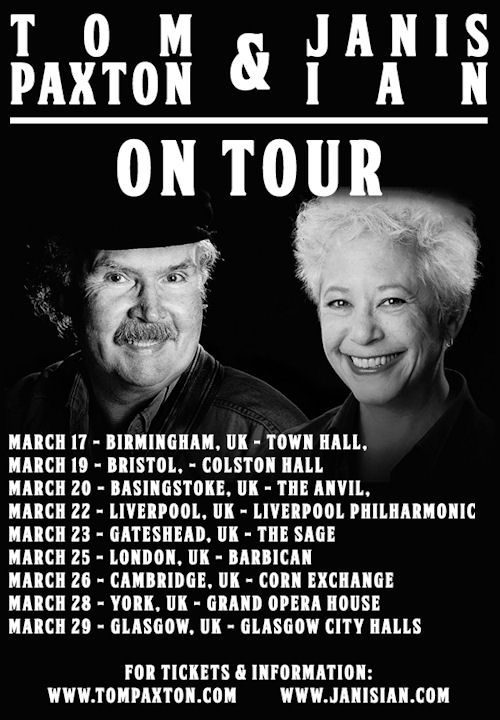 Beauty is a strange currency. Janis Ian’s ode to a youth impoverished by plainness is a lilting bossa nova gem. Had she thought herself endowed with familiar features the art would not have been created.

“That seat will go.” said my neighbour as I spread my coat on an adjacent spare seat in the sold out concert in the Barbican, London on Tuesday evening.

“Have you seen Janis Ian before?” she asked me. “I did a few years ago and she was fabulous.”

And they were; from the moment Tom Paxton and Janis Ian took to the stage with Robin Bullock on mandolin.

“Yes we all still sing songs of hope and peace,” said Paxton after a fine opening rendition of How Beautiful upon the Mountain – the harmonies were perfect; the mandolin fills were divine and I caught glimpses of the extraordinary guitar skill Ian was to reveal as the set continued.

From my seat, one row from the stage, I thought initially she was playing a bass. But her diminutive height and virtuoso playing combined to deceive. She makes one instrument into an entire band.

This Old Town was a sublime dustbowl ballad. It will now be required listening by my Steinbeck students!

This old town was built by hand

In the dust bowl of the motherland

There must be rock beneath this sand

Paxton told of how he’d met Janis at a Greenwich Village hootenanny in the 1960s when she was 14. He joked that she hadn’t grown up much since then.

My chair guarding neighbour had seen Paxton in 1965 at ‘The Fox’ in Islington Green in London. She said she was 4 at the time and laughed.

Ian’s muscular and soulful style was evidenced in Society’s Child. As her later, blinding performance in Bright lights and Promises, her command of the guitar’s language is phenomenal. She plays bass, rhythm and lead on one fret board. “They didn’t trust my beat.” She says of reactions to her style in the 1960s and 70s.

Her plucking style is percussive and reminiscent of blues greats. A stunning guitarist with a sweet and powerful voice. The ovation she received after Bright Lights and Promises was prolonged and emotional.

Paxton with good grace and humour used his guitar playing prowess as the jumping board for My Christmas Guitar in which he comically hammed up his playing for very funny effect.

And after the interval he gave us two beautiful songs for his daughters as little children and grown women and mothers. His deep love for his daughters was poignant and generous in Jennifer and Kate. Ian countered his affection with her The Tiny Mouse and her alleged dislike of youngsters.

We awkward Englanders were warmed up enough to join in with Bottle of Wine and enjoy Paxton’s anecdotes about John Hurt and his eponymous song.

The pathos and warmth of their combined performances on Ramblin’ Boy and The Last Thing On My Mind were enhanced by their perfectly complementing voices, Ian’s fine playing and Bullock’s understated but beautiful mandolin.

And towards the end of the show, Ian paid tribute to her good fortune in writing down a song which captured our hearts and launched into the melancholy jewel of At Seventeen.

We are all lucky that she spent her fortune well.

Rosa Redoz can be reached at rosaredoz@hotmail.com. She teaches Shakespeare to lucky students in Hertfordshire, near London.