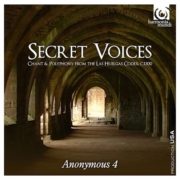 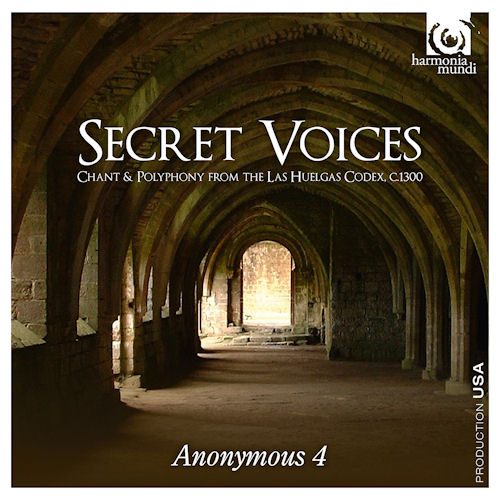 This year marks the 25th anniversary of the acapella group Anonymous 4. They are team of four singers specializing in, though not always limited to, medieval music. During that time they have released a number of recordings including two collections of music by Hildegard von Bingen, and have been recognized as among the foremost interpreters of the music of this period; but they have also ventured into American gospel and rural folksong (Gloryland with Darol Anger and Mike Marshall). Though they had considered retiring the team in 2004, they have continued touring and recording and they are far from wearing out their welcome. If you are not familiar with their work, their website www.anonymous4.com is well worth a visit. The latest release from Anonymous 4 “Secret Voices: Chant & Polyphony from the Las Huelgas Codex c.1300” is a collection of music from the Cistercian Abbey of Santa Maria la Real de Las Huelgas near Burgos in northern Spain.

Las Huelgas (literally “place of refuge”) was extraordinary for its time – or any other time for that matter – in that the Abbess had been delegated the power to administer the sacraments that are otherwise allowed only to male members of the church. This unusual status also appears to have contributed to the richness of the music collected in the Codice de canto polifonico or Codex Las Huelgas which was re-discovered in 1904. The Codex is a rich collection of nearly 200 Latin songs ranging from plainchant to polyphonic motets and various other forms from France and from Spain and written during a time spanning the 11th to 14th centuries. Many of the songs contained in this codex have not been found in any other collection. The Las Huelgas Codex, collected in the early 14th century, is believed to have been intended for the use of the Cistercian nuns of the Abbey, even though women at that time were forbidden to sing polyphony.

Anonymous 4 has taken 23 songs from the Las Huelgas Codex and arranged them into the format of what they speculate might have been a day of music devoted to the Virgin Mary. They divide the day’s music into five parts representing First Light, Morning, Mass, Evening” and Night. One song in the First Light grouping is a French love motet, but reworked for the nuns as Claustrum pudicicle (Cloister of modesty) extolling the virtues of their calling. A song in the Evening grouping, In virgulto gracie (In the garden of grace) features a beautiful polyphonic duet. The dominant part of Secret Voices is a selection of songs arranged into the form of a mass. Even within the reimagined mass, Anonymous 4 has mixed in a blend of the various styles of song highlighting the richness of the Las Huelgas Codex.

Even considering the special quality of the music in this collection, it is made even more beautiful by these singers’ angelic voices. Whether singing in unison or counterpoint the four voices consistently convey the joy of singing these songs.

Anonymous 4 will be in Santa Monica as part of the Jacaranda concert series on December 3, 2011, at the First Presbyterian Church.

When not dining in exotic locales, Michael Macheret forages closer to home in the South Bay regions near Los Angeles.