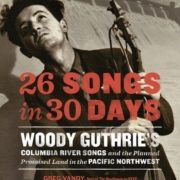 and the Planned Promised Land in the Pacific Northwest 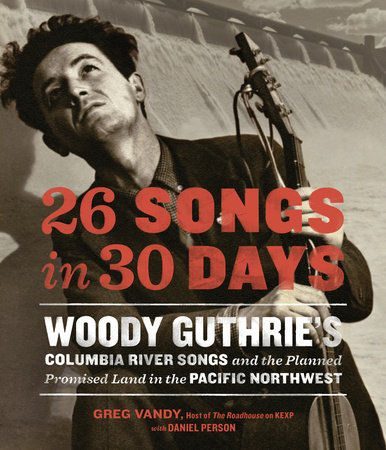 There are no shortage of writings about and by Woody Guthrie but 26 Songs in 30 Days is a great contribution because it is a work focused on the relationship between the Bonneville Power Administration (BPA) and Woody and what this massive public works project meant to him as the country was coming out of the Great Depression and preparing for World War II.

I clumb the rocky canyon where the Columbia River rolls,

See the salmon leaping the rapids and the falls;

The Big Grand Coulee Dam in the State of Washington

It’s just about the biggest thing that Man has ever done.

The Biggest Thing That Man Has Ever Done, was one of the songs written by Woody during those 30 days. The list also includes Pastures of Plenty, Roll Columbia, Roll, Roll; Hard Travelin’; Big Grand Coulee Dam; My New Found Land, among others. This was possibly one of the most productive and creative periods in his life.

If 26 Songs was only about the songs you might do just as well checking out the Sing Out published (1991), Woody Guthrie, Roll On Columbia, The Columbia River Collection or the album by the same name by Rounder Records (1987). But 26 Songs examines what this 30 day gig in Portland, OR in 1941 meant to Woody. In 1940 Woody recorded Dust Bowl Ballads for Victor Records. The tragic experiences of the Dust Bowl refugees informed him and were fresh in his mind. Woody was inspired by the BPA project and promises of good irrigated land, cheap electricity and harnessing nature for the benefit of the people. In a sense, this, at least in part, was our government’s program to give back to the refugees what they had lost. If the Dust Bowl Ballads were one side of the coin, the Columbia River ballads were the other. As expressed in Woody’s original version of Pastures of Plenty:

I think of the of the dust and the days that are gone,

And the day that’s to come on a farm of our own;

One turn of the wheel and the waters will flow

‘Cross the green growing field, down the hot thirsty row.

And in The Grand Coulee Dam,

Uncle Sam took up the challenge in the year of thirty three,

For the Farmer and the Factory, and for all of you and me.

He said roll along Columbia, you can ramble to the sea,

But river while you’re rambling, you do can do some work for me.

The writer, Greg Vandy who hosts a roots music radio show on KEXP called “The Roadhouse,” doesn’t just look at the hopes and dreams of the “Planned Promised Land” but also looks at the Native American response when Northwest tribes gathered in Kettle Falls for a three-day “Ceremony of Tears” about the damage that would forever change their land and end their vital relationship to the salmon. The BPA project also took away tribal lands.

26 Songs also looks at who Woody was personally and politically before, during and after the 30 days. But Vandy avoids getting lost in Woody’s bio, of which there is already a lot out there. The book does not reprint the lyrics and music and recognizes that many of the songs were later changed by Woody or others. It does, however, have photos that were available of the original songs. The BPA intent was for Woody’s songs to be part of a film to publicize the project. However WW II intervened and a short version of the film, The Columbia was released in 1949 with only three of Woody’s songs.

26 Songs in 30 Days is highly recommended for fans of Woody and that exciting period of history.

Lenny Potash is a Single Payer activist and folk singer who has been going to hoots since about 1950.