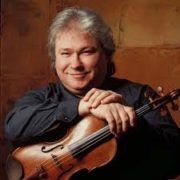 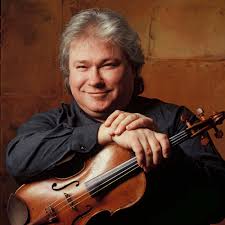 Peter Ostroushko was an American violinist and mandolinist. He performed regularly on the radio program A Prairie Home Companion and with a variety of bands and orchestras in Minneapolis–Saint Paul and nationally. He won a regional Emmy Award for the soundtrack he composed for the documentary series Minnesota: A History of the Land (2005).

“Let’s start with the word ‘brilliant’ and move on from there,” said one reviewer. Acclaimed musician Norman Blake placed him among the greats of mandolinists. Decade upon decade, arts critics, fellow performers, and fans worldwide have sung the praises of Peter Ostroushko.

Mandolinist, fiddler, composer, arranger, and teacher, Peter grew up listening to tunes played at family get-togethers in the Ukrainian community of northeast Minneapolis. It’s the music that provides the basis for many of his compositions. “When I first picked up my father’s old bowl-back mandolin, around the age of three, little did I know that I was committing myself to a lifelong odyssey with the instrument,” he says.

His first recording session was an uncredited mandolin set on Bob Dylan’s Blood on the Tracks. And he went on to release a string of critically acclaimed albums of his own, including Postcards: Travels with a Great American Radio Show; Slüz Düz Music; the three CDs that make up his Heartland Trilogy (Heart of the Heartland, Pilgrims on the Heart Road, and Sacred Heart); and When the Last Morning Glory Blooms.

Perhaps his most ambitious recording is The Mando The Mando Chronicles. The three-CD set is a wide-ranging compilation spanning musical genres from old-time and bluegrass to jazz, classical, American parlor standards, tunes from Brazil, Ireland, France, Italy, Ukraine, and more — plus ace originals by Ostroushko himself. Jon Bream, longtime music critic for the Star Tribune, named it one of the 10 essential Minnesota albums of the past 40 years, a list that also included works by Bob Dylan and Prince.

Peter spent more than 40 years as a frequent performer on A Prairie Home Companion, and for a few seasons was Music Director for the popular public radio show. You may have caught him on TV too. He’s appeared on Austin City Limits, Late Night with David Letterman, even Mr. Rogers’ Neighborhood.

His works have been performed by the Saint Paul Chamber Orchestra and the Kremlin Chamber Orchestra, among others, and his music has been featured on public television specials such as Ken Burns’ film The National Parks and Minnesota: A History of the Land, for which Peter won an Emmy.

Although a serious stroke in 2018 left him unable to play the instruments he once rarely put down, he continues to be heavily involved in music. He has plans to release recordings of his previous performances, and he coaches students still eager to learn from a true virtuoso.

Reflecting on his remarkable musical journey, Peter has some advice for up-and-comers: “Dig up the yard and plant a garden. Vegetables, flowers, whatever gets your socks off. Getting your hands in the dirt will teach you all you need to know about being a musician. See it through — from the backbreaking work of tilling the soil, until the fruits of your labor show themselves at the end of the growing season. The planting of the seed till the plant produces its bounty is watching God at his creative best. What inspiration! Plus, if you can’t get any gigs, you won’t starve.”