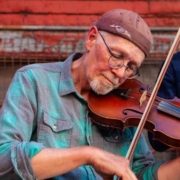 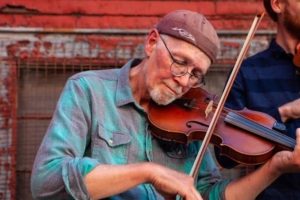 Pete Sutherland, a beloved Vermont musician who excelled at — and took great pleasure in — making music with others, died in Montpelier on November 30. He had cancer and ended his life with medical assistance using Vermont’s Death With Dignity Law, his friend Mark Sustic said. Sutherland was 71.

Sutherland was a multi-instrumentalist, singer, songwriter, composer and arranger who played traditional and folk music. His primary instruments were fiddle, guitar and piano, and he was a sensitive and inventive accompanist and ensemble player, according to those who played with him. Sutherland also taught and mentored young musicians. He could play fiddle and call dances on the same tune.

“It was a real treat to be able to make music with Pete,” said Grey Larsen, a renowned Irish flute and tin whistle player. In the 1980s, Sutherland, Larsen and hammer dulcimer player Malcolm Dalglish formed a trio called Metamora. The group released three albums and toured the nation, performing in every state but Hawaii. 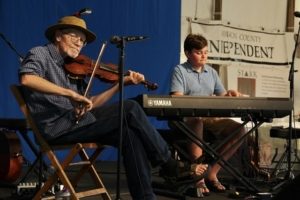 “He played fiddle like he was singing through the fiddle, fiery and tender at the same time,” Larsen said. “As a guitarist and pianist, he had incredibly rich imagination when it came to chords, to harmonies, and counterpoints. And as a songwriter, Pete has so much humanity and wisdom in his writing.”

Sutherland was born in Burlington and grew up in Shelburne. He took piano lessons as a kid, but his musicianship revealed itself before then. “Peter could hum a recognizable tune before he could talk,” his mother told this reporter 20 years ago.

In college, Sutherland became serious about music and taught himself banjo and fiddle.

Sutherland played in numerous groups over the years, including Pete’s Posse and the Clayfoot Strutters. He also taught music in schools and gave private lessons. He was artist leader for the touring group of Young Tradition Vermont, a music and dance program for youth that’s affiliated with Vermont Folklife Center.

“Pete had a gift,” said Sustic, who is the executive director of Young Tradition Vermont. “A gift of being able to see things and hear things that other people didn’t hear in the cacophony of everything that’s going on in life, and in a music ensemble.”

Sustic added that he “got in trouble” with Sutherland for using the word “gifted” to describe him. “He wanted to do his part,” Sustic said, “but he didn’t want to be singled out as a gifted person in a crowd.”

Yet Sustic said Sutherland both met people “where they were” as players and elevated the playing of musicians around him. “You just kind of fell into his arms and it would be so right, you just wanted more of it,” he said.

Singer and guitarist Cindy Kallet, who along with Larsen visited Sutherland the day before he died, noted his generosity and accomplishment teaching young players.

“Pete’s mentoring was legendary,” Kallet said. “There are many seeds of Pete growing in Vermont and all over.” 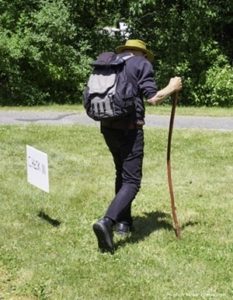 At their November 29 visit, Kallet, Larsen, and other friends and musicians sang a song called “Farthest Field” with Sutherland. The song includes these lyrics:

Walk with me and we will see the mystery revealed
When one day we wend our way up to the farthest field.

That night, Sutherland emailed a friend and told him death was near.
“I feel entirely at peace and ready,” he wrote.

This article was first published in Burlington, Vermont-based independent newsweekly Seven Days, and is reprinted here with permission.

Interview on PBS with Pete.