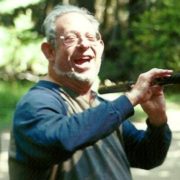 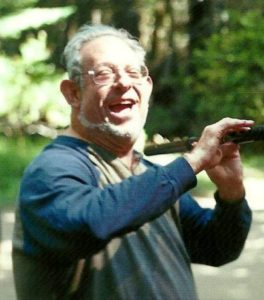 Allen ‘Mickie’ Zekley passed away peacefully on October 28, 2022 in a hospital in Saint Helena, California. He is survived by his wife Elizabeth, his adult children Marina and Corwin, and the many, many hundreds of admirers and friends who will remain ever grateful for the gifts he so generously gave during his life.

After a chance encounter with a friend’s guitar at fifteen years of age, Mickie discovered he had a true gift for music, much to the befuddlement of his mystified but supportive parents. Within a few years he had 45 guitar students, and was frequenting the folk clubs of the vital Los Angeles club scene. His musical horizons grew along with his abilities. At age 18 he met Robert Donovan Thomas, who became one of Mickie’s mentors and a guide and beloved companion on the journey into the world of exotic ethnic instruments – wind and string – which later became a huge part of Mickie’s calling and livelihood. Mickie’s young life was full of picaresque musical adventures, described on his blog which is a delightfully imagination illuminating chronicle.

Mickie’s tribe grew – as he performed at exotic venues such as Grace Cathedral including the Renaissance and Dickens Faires with the musical conflagration known as the Golden Toad. The Toad was a varied group of enthusiasts whose motto was “We perform the music of your ancestors no matter where they were from.” Wonderful, charismatic musicians such as Bob Thomas, Will Spires, Ernest and Deborah Fischbach, Cathie Whitesides, Bill Gilkerson, Joe Moir, Cait Reed, and a host of others formed the core of Mickie’s musical world, a world that would expand for the rest of Mickie’s life.

Mickie discovered a gift for commerce when he and Cait Reed started selling Turkish clothing, quite by chance, and made a good business of it. Later, after a long trip to Europe and a meeting with rare instrument dealer extraordinaire, Tony Bingham, that business expanded to include, then specialize, in rare ethnic musical instruments, and grew over the years into Lark in the Morning, a music store which at its’ apex included three retail stores and an online web store. 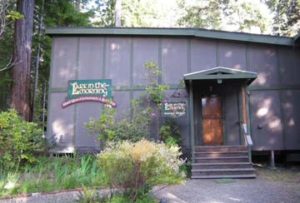 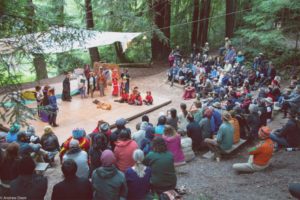 After moving to Mendocino and hosting ever larger music parties at his house in the woods, Mickie discovered the Mendocino Woodlands, an idyllic WPA camp nearby, and moved his parties to that magic facility. The Lark in the Morning music camps were born. Under Mickie’s careful but visionary and eternally enthusiastic guidance that camp grew into an institution unique in the world. It became a Dionysian initiation site, a vast party, a school of inspiration and introduction to rare folk and traditional musics, lore and dances from around the world, a place where lives were changed, ecstasy was experienced, where children grew into dancers and musicians, where oldsters had their imaginations revivified, where lifelong friendships grew, where new tribes of like-minded musicians were born, where joy was shared and revelled in. The number of people who are indebted to Mickie and his vision for changing, deepening and enriching their lives are legion. As Ian Law, a Lark attendee for many decades said about the loss of Mickie, “the void is huge because he was more than a friend in many regards. He was a force walking through life, inviting others to come along with him for the delight of discovery, music, and dance!”

Mickie met his wife Elizabeth at Lark in the Morning in 1989 and they married in 1991. She is an immensely talented musician, and like Mickie plays a number of traditional instruments with great skill, grace and fire. They have literally made beautiful music together since they joined their lives, and in later years with their very gifted offspring, Corwin. In 2021 Mickie was honored by the Far West division of the Folk Music Alliance, a national folk music organization, with the Best of the West award for those who inspire others by embodying and sharing folk music values and traditions. It was a fitting recognition of Mickie’s legacy – of Love – the Love of music, of tradition, of life, of his family, of his friends, of his community; all expressed through his most wonderful ability to invite everyone along with him, and make it possible for the rest of us to enter into and live out our dreams in those beloved realms of music and the music community.

Here’s a wonderful, extensive  interview with Mickie by Riggy Rackin.