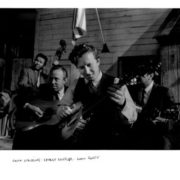 “THE ONLY REASON I’m STICKin’ Around NOW,  FOLKS,  IS to See What IN THE HECK IS GONNA Happen Next” 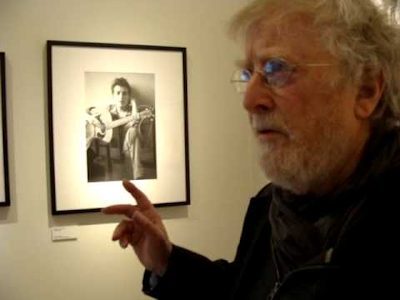 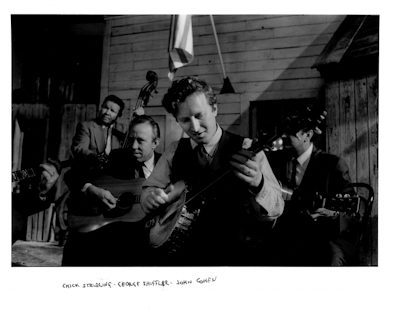 In this photo from John Cohen’s personal collection, Cohen performs with the Stanley Brothers and the Clinch Mountain Boys. That is probably Ralph Stanley whose hand and banjo neck come into the extreme left of the photo, and Carter Stanley whose face is obscured by John’s banjo headstock. The other players are noted in ink on the photo; Chick Stripling, George Shuffler, John Cohen..

I first saw John Cohen and the New Lost City Ramblers in 1963 at a show at the Lambertville Music Circus in New Jersey. At the time, they were touring heavily and Mike Seeger didn’t even remember the venue when I asked him about it decades later. Tom Paley had already left the band then, largely due to the touring schedule, and Tracy Schwartz had joined the group. I still have some of their early LPs in my collection. The NLCR influenced many in my generation to learn to play instruments, especially old-time music. My earliest memory of John was his recording of Talking Hard Luck, a talking blues which derives from the 1927 recording by Chris Bouchillon called Born in Hard Luck, though only the very beginning appears in Cohen’s version.

In his own words, John wrote, “When I started to pursue music, it was a many-sided involvement. I photographed it, performed it, presented it, recorded it, and made films about it. While some collectors of music were out looking for stars and innovators, I was seeking music that was still in direct touch with its roots, and I only photographed things connected to my search.” John’s contributions were massive. Without him, we would likely never have heard Roscoe Holcomb and many others. As a founder of Friends of Old-Time Music, he brought many performers to New York. John’s films, photography, and recordings documented many fine musicians. One, about Holcomb, is called The High Lonesome Sound, which is likely the first use of that phrase to describe music. John was born in 1932, and he died from cancer on September 16, 2019. He is already greatly missed.

Steve Goldfield is a former board member and former Old-Time Music Coordinator for the California Bluegrass Association. He also writes for Fiddler Magazine, Bluegrass Unlimited, and the Old-Time Herald.