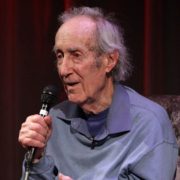 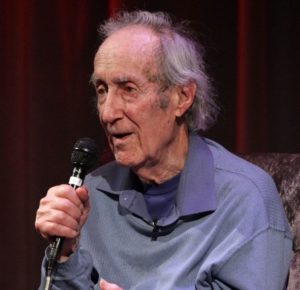 ED PEARL had his first taste of producing folk music concerts as a student at UCLA in 1954 when he helped produce a Pete Seeger concert on campus. An avid guitar player, he studied with Bess Lomax Hawes — the daughter of John and sister of Alan Lomax, America’s greatest music collectors. Bess was the female member of the “Almanac Singers”, with Woody Guthrie, Pete Seeger, Butch Hawes, et al. After various career jaunts, as a guitar teacher, bus driver, messenger, a gun shill at the LA County Fair, a playground director and a mathematics analyst at Edwards Air Force Base, in 1957, he and Kate Hughes began the process that led to the Ash Grove. Together, they produced their first, real concert – a sold-out flamenco extravaganza and then in the next months, two more sold-out concerts, visited four coffeehouses and then they were asked to book two nightclubs. Envisioning a different atmosphere, with financing from fellow music-lover and Standard Brands Paints VP Sid Greenberg, Ed embarked on a search for a locale for a club of his own. With friends and relatives contributing funds and cheap labor, the lease was signed and the site was converted into the Ash Grove.

The Ash Grove opened on Friday, July 11th, 1958 and for the next 15 years hundreds of notable artists, reflecting a variety of folk styles, blues, bluegrass, gospel and traditional work songs, appeared on the its stage: Howlin’ Wolf, Muddy Waters, Big Mama Thornton, Lightnin’ Hopkins, Johnny Cash, Doc Watson, the Byrds, Taj Mahal, Ravi Shankar, The Chambers Brothers, Rambling Jack Elliott, Sleepy John Estes, Pete Seeger, to name a few. Ed produced shows at the Ash Grove until November 1973, when the disaster of the third arson fire in four years closed the club. Next Ed raised funds for LA’s People’s College of Law, on whose behalf, he organized a series of very successful concerts along the West Coast, from Seattle to San Diego, with Phil Ochs, Holly Near and Mimi Farina, among others.

For five years, on behalf of LAGLAS (the Los Angeles Group for Latin America Society) Ed produced concerts of Chilean groups Quilapayun, Inti-Ilimani, Los Parra and others, in addition to Mercedez Sosa of Mexico, Daniel Viglietti of Uruguay, Roy Brown of Puerto Rico and several other superb, progressive musicians.

Other notable productions include; 1976 a People’s Bi-Centennial, The Venice/SPARC show of 1980, The 1985 KPFK Winter-fest, Art Against Apartheid Show of 1987-8, The 1984 LA Olympics Reception, the PCL shows-Gil Scott-Heron, et al, The Ash Grove Wiltern 30th Anniversary show of 1988, with David Crosby and the Byrds, Willie Dixon, et al; the final Mime Troupe show; and The Ash Grove on the Santa Monica Pier. In 2008, “The Ash Grove 50th Anniversary” was celebrated at UCLA! Ash Grove alumni who shared their appreciation for the anniversary celebration included Ry Cooder, Taj Mahal, along with the likes of John Hammond, Barbara Dane, Bernie Pearl, The Freedom Singers, Michelle Shocked and numerous others. But the real star was the memory of a place in which so much music, so many ideas, and so many attitudes had the opportunity to come to full fruition

Many artists have Ed Pearl to thank for helping their careers along. He’s known and worked with just about everyone. – from http://www.far-west.org/best.html
Ed Pearl lived in Venice from 1974 to 1990, and 1992 to 1994. He was very active in local politics, including the Venice Town Council and the early Peace and Freedom Party Voter registration drives. Ed was not a Venice provincial, he worked with activist organizations globally. He  lived in Echo Park.

Ed Pearl wrote articles for the Venice Beachhead, and he is still cited by many Venice activists and artists as a big influence on the direction of their art and politics. Ed was part of a Venice political discussion group with a strong lesbian feminist influence, at Rick Davidson’s House with Steve Clare, Barbara Avedon, Bob Wells, Larry Abrams, Arianna Manoff. Ed brought the idea of an event around Joanne Little to the ‘group’ meeting, at Rick’s or where Susan was living before moving in with Steve Clare. It had immediate and fierce acceptance, spread like wildfire through the Black, Lesbian, Gay and progressive communities, the Town Council, Israel Levin Ctr., and by word of mouth, the Beachhead. It was a phenomenal success, packing Oakwood Park, behind the Center, had speakers and music from throughout the community, was the first time in memory that everybody was together, and, I believe, remains the only such time. Magnificent, and memorable.

Ed produced the San Francisco Mime Troupe’s version of Brecht’s The Mother, at the Fox Venice Theatre, for 3 sold out nights, and with Jane Fonda and Lee Strassberg in attendance. Ed also showcased John Cohen’s films on Peruvian Indigenous peoples struggles, at the Fox Venice. Suzanne Thompson cites Ed as teaching her about concert production, in producing Hands Across America, and to incorporate all aspects of culture into politics. Carol Wells has worked with Ed on many cultural projects, as well as support for the Center for Political Graphics. You may have seen me around Venice being a Sound System for Art and Community and Politics. I would not be this person if not for Ed Pearl.

In 1982 Ed, with Cheri Gaulke of the Women’s Graphic Center, and various Venice people like Osah Harmon, Mary Lou Johnson, Ed Ferrer, Dan McNay and Eric Ahlberg produced on two large Anti-Nuclear “Artists for Survival” events. The first was in a parking structure downtown near Al’s Bar, where we built a stage and The Chamber Brothers performed, with, art, installations, and performance. The next year we held a similar festival in Pasadena where Charlie Hayden’s Liberation Orchestra with Milcho Leviev performed.

In 2008 we produced a sold-out 2 nights at Royce Hall for the Ash Grove 50th Anniversary Concert, and I saw a lot of Ed’s friends from Venice there.

We salute Ed’s contributions to the culture of  the world.