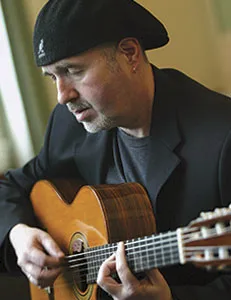 Dennis Cahill, an American guitarist renowned in the world of Irish traditional music, passed away on Monday, June 20, after an extended illness. He was 68.

Cahill was best known for his genre-defining duo with Irish fiddler Martin Hayes, with whom he toured the world and recorded three albums on Green Linnet Records. His guitar accompaniment style was considered groundbreaking in Irish music.

With Hayes, he was also a founding member of The Gloaming, a Meteor Prize-winning Irish-American group.

“Dennis has been a very big part of my life for the past thirty five years,” Hayes said today. “As a musician and as a friend I will miss him terribly. His beautiful musical ideas will echo far into the future and his friendship will live on in my heart. He impacted my life and expanded my musical horizon. I was lucky to have known him, to have had him as a friend and to have had the privilege of making music with him for so many years.”

Irish President Michael D. Higgins paid tribute to Cahill today, saying, “it is with great sadness that those with a love of traditional Irish music across Ireland, his native Chicago and around the world will have heard of the death of Dennis Cahill. Dennis brought a unique and innovative style to his guitar playing, while being deeply respectful of the essence of traditional Irish music. He and Martin Hayes explored new musical territory and helped create a phenomenal interest in traditional music among a new generation of people both within Ireland and across the world.”

Cahill was born and raised in Chicago to parents from County Kerry, Ireland. He studied classical guitar at the Chicago Music College, and was well known on the local music scene, playing folk, rock, and blues. He met Hayes in Chicago in the 1980s, where they first turned their hand to the experimental Celtic-rock-fusion group Midnight Court.

Later, Cahill and Hayes would perform for President Obama in Washington, for President Higgins at the Royal Albert Hall in London, and for the European Union in Brussels. The duo collaborated with a wide range of artists including jazz musicians Bill Frisell and Cassandra Wilson, country music star Ricky Skaggs, Spanish composer Jordi Savall, the Irish Chamber Orchestra, and Sting.

Cahill worked with numerous Irish and Irish-American artists including Jimmy Keane and Liz Carroll. He was also a record producer and art photographer.

Cahill is survived by his wife, Mary Joyce, and stepdaughter Cliodhna.

An appreciation from Martin Hayes… 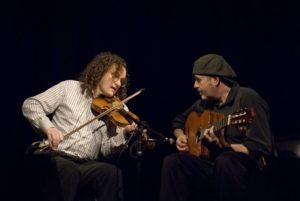 We knew each other for over thirty five years without ever really giving verbal expression to how we felt about each other. Once in a while after a whiskey you might lean your arm on my shoulder and tell me that I was a good guy or that we’d made a difference, I knew what you meant. It would be an understatement however to say you didn’t like any mushy emotional talk, but yet, without ever having to say it, we were both keenly aware of our deep loyalty and love towards each other. That feeling of trust was always there in such a way that we never had to talk about it. We really were great friends, we loved each other and we really had a hell of an adventure.

We started on a musical journey many years ago in the bar rooms of Chicago, we didn’t think we’d ever make it out of those bars to the concert stage, but today the President of Ireland and the government minister for the arts were both writing about the huge impact you had on the world of traditional music. You made it out of the bar scene and on to some of the finest stages of the world. You really did succeed, you pulled it all together into a most beautiful crystallization of your musical loves and influences. Nobody before you had ever played those chords and rhythms with Irish music, in the way you did. You matched the beauty of these traditional Irish melody’s with your own equally beautiful sequences of chords and hypnotic rhythms. Every night we played, we would give it our all, we’d zig and zag until we locked in. Some of those moments were sublime moments where our connection was truly telepathic. There were so many times on stage when you were simply able to read my mind and I hope that you still can.

I wasn’t able to listen to our recordings yesterday as I sat in the airport in Manchester. I don’t think I’d have been able to hold it together if I listened. I heard you slipped away to the sound of us playing “The Lament for Limerick”. You remember the evening we recorded it when we were nervously making our first album in the basement of the house in Seattle. We had already recorded the air Bruach Na Carraige Báine and then I changed my mind and said let’s go downstairs and record the Lament for Limerick instead, we did it in just one un-edited take, right in the moment, just like we did with the Paul Ha’penny set.

It was kind of fitting that I found myself in an airport for many hours yesterday, maybe we spent more time together in airports than anywhere else. We’d often meet at the gate of some connecting flight, you having come from Chicago and me from wherever I was living at the time. I’d be searching for that backward slanting baseball cap in the crowd, or sometimes just your shaved head. Yesterday in the distance I spotted somebody from the back with a shaved head and a black tea shirt, and for an instant I had that familiar momentary jolt of thinking I’d just found you. I suspect that I will be having that experience for some time to come. You might have looked like someone else with a shaved head and black T-shirt, but in reality I never knew anyone remotely like you. You were one of a kind, a very special blend of talent, humility, grace and good humor.

The last time you and I were in this airport it was just as crowded and I remembered you suggesting that we go and find a lounge and pay for a few hours of quietness, you said we deserved it. I took your advice again yesterday and sat there in the quietness reading messages of love and admiration from every friend you and I had ever known. I spent those hours mostly remembering your life and all of the shared experiences we had while touring the world together. Reading messages from those who loved you so much was comforting and heartwarming. It was lovely to see from their messages that the beauty of your chords and music had gone so deeply into the hearts of so many people. Little did I know when we were in that lounge back then, that the next time I would be there, you would be gone from us.

We came from different musical worlds, but together, we made our own world of music and I think we made a difference. I am forever indebted to you and grateful to you for all those magic years of music, friendship and fun.

Safe journey onwards, you got the early boarding again, but I’ll see you at the other end.