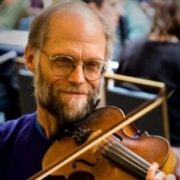 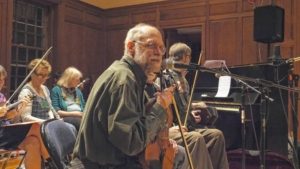 Kaynor spent decades playing, calling, and teaching up and down the Connecticut River Valley and far beyond, earning a reputation as a community builder and friend of traditional music.

“The thing I think David’s done best in his life is he’s encouraged hundreds of people who probably never really saw themselves as up-and-coming musicians,” said his longtime friend, Susan Secco, of Northfield, Mass.

At his dances, “There was always an open-door policy on stage,” Secco added. “He’s had a mission, trying hard to break down barriers.”

David lived in Montague, Massachusetts. He began playing fiddle in 1974 and played and performed in many bands until he could no longer. He started calling contra dances in 1980 and took over at the Guiding Star Grange Hall in Greenfield, Massachusetts which continued for decades.

“I grew up in a family that was really good at harmonizing,” said David, whose father sang barbershop-style harmonies to pass the time washing and drying the dishes with his six siblings. David learned to play trumpet growing up in Wilbraham, then also picked up mandolin, banjo and guitar. He taught himself fiddle with help from the Arm and Hammer String Band while living in Burlington, Vt. 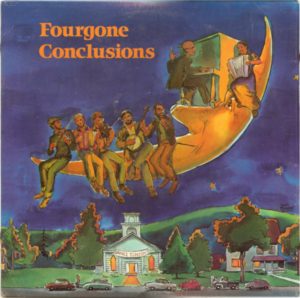 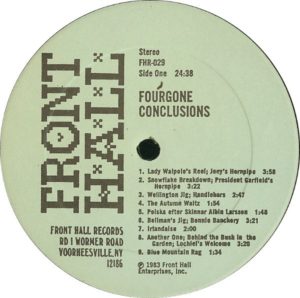 I remember back in 1982, I was stubbornly protesting the notion that we make an LP. “We play for dancing!” “We don’t perform – just participatory events!” “Who wants to listen to 15 minutes of Chorus Jig?” and so forth. It was you, David who really convinced me to take Bill and Andy Spence up on the offer to make an LP of Fourgone Conclusions, and I have been grateful ever since! Although compromises had to be made to turn dance music into a listening music album, but it pretty well captured the essence of who we are.

Kaynor had become so good at fiddling that he accompanied the Green Mountain Volunteers dance group on its European tour in 1978. At a week-long festival in Bulgaria, he bonded with a Swedish folklore group and visited them the following year to learn Swedish fiddling and folk dance.

“I liked a lot of different types of music — Irish, Scottish, Quebecois. But having a group of friends to connect with the music, that was really big,” Kaynor explained. “The social experience of the music was a major driver.”

He also taught Swedish dances, “helping people learn how to get through passably pleasant approximations of the basic polska, schottische, hambo, and one or two other Swedish dances.

He was on staff at Northern Week at Ashokan every summer since 1983 and at Contra Dance Musicians’ Week at the John C. Campbell Folk School every summer since 1996. He taught, played, and called at Pinewoods in southeastern Massachusetts; Buffalo Gap (West Virginia), Mendocino (California), Lady of the Lake (Idaho), Ogontz and Summer Acoustic Music Week (New Hampshire), Suttle Lake (Oregon), Wannadance Uptown (Seattle) and Fiddle Tunes ( Port Townsend, Washington) and at many other camps and weekends, workshops, and other events around the country. 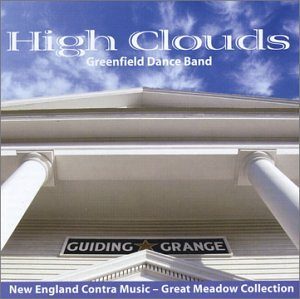 From the liner notes of High Clouds by the Greenfield Dance Band (GDB):

When you show up a contra dances every other Friday night at the Guiding Star Grange in Greenfield, MA, it is different from other dances around the country. Nobody takes your money at the door. There is an open fiddle case for your contribution. Short of cash? “Valley Currency” or barter is acceptable. If you are a budding contra musician, you are welcome to sit at the back of the stage out of range of the sound system and play along with the band. New dancers are greeted and drawn into the flow of the dance. The resulting ambiance is the work of the “Greenfield Dance Band” and its impresario, David Kaynor.

David was one of the four Kaynors in the “Fourgone Conclusions,” a seminal early contra dance band. David started his own band at the Grange in 1980, and legendary Ralph Sweet was the first caller. After Ralph left that year, David took over calling responsibilities. A dancer and musician since his preteens, playing and calling contra music and dance were David’s great passion. In 1983, bassist Stuart Kenney’s ebullience and hunger for musical growth invigorated the band and the scene. The following year, when Mary Cay Brass arrived, she pioneered a compelling piano style which wedded the chordal story lines, textures and moods of Celtic guitar to contra dancing’s pulse and phrasing. David’s fiddle harmonies, Mary Cay’s rhythmic energy and melodic nuance and Stuart’s bass playing met and bloomed in this fertile ground.

Starting in 1998, so did Peter Siegel’s exuberant voices of mandolin, guitar, banjo, and musical feet.

Guest musicians are part of the GDB’s signature. Thanks to their start with the band, many of these guests have become established figures on the contra scene. GDB has its own sound no matter the guests, and exciting surprises have become routine.

But a major influence on the music of the “Greenfield Dance Band” is the dancers. In contra, the dancers and musicians inspire each other. Look up and down a contra line on one of the band’s Friday dances at the Guiding Star Grange Hall and you will see a lot of the finest people in the world. They are highly diverse in age, background, profession, lifestyle and social and political thinking. Yet they are snugly joined in fellowship with other dancers and the musicians at the Grange. Many discovered contra dancing there on the band’s nights. When the “Greenfield Dance Band’s” music fills the hall, the dancers’ astonishment and delight are part of the mystique of the Guiding Star Grange.