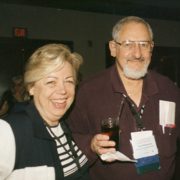 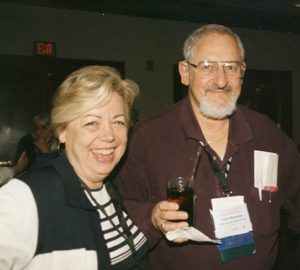 Clark Weissman, the grand old man of folk music, who with his late wife Elaine founded CTMS—the California Traditional Music Society—which sponsored the Summer Solstice Festival of Folk Music, Dance and Storytelling; NAFMA (the North American Folk Music Alliance); the annual New Year’s Folk Music Camp at Camp Hess Kramer in Malibu and A Taste of Music in Encino at their Center for Folk Music on Balboa Blvd., in Encino—where they celebrated their longtime friend Daniel Pearl’s posthumous Harmony for Humanity & World Music Days, has passed away. Clark was 87 years old. He suffered from dementia at the end, but never lost his inimitable smile and love for life.

Clark broke into folk music in 1955, at the bright young age of 21, while still a student in Computer Engineering at MIT. Clark’s wife, Elaine, was at times larger than life—held that festival together for as long as she lived—acquiring city grants and beyond to somehow continue to operate on their shoestring budget year-in and year-out—the most successful teaching festival in the country. She and Clark then founded NAFMA—right here in Malibu—the North American Folk Music Association, still thriving today as Folk Alliance International. Clark often seemed to work behind the scenes, managing the festival’s finances while Elaine became its public face.

But Clark was actually the musician in the family, and far more than an amateur. The major revelation in this biography of Peggy Seeger, is the fact that Clark Weissman helped her make her first record; he is the guitarist on this rare 10-inch Folkways album—the same format that featured Woody Guthrie, Lead Belly and Pete Seeger—entitled Folk Songs of Courting and Complaint, Folkways Records FA 2059—1955 (Peggy Seeger accompanied by Clark Weissman on guitar)—the album that launched her recording career—the face, as it were, that launched a thousand ships. Clark and Peggy were born just a year apart, 1934 and 1935, and attended MIT and Radcliff in the mid-fifties, where they met. Clark was there right at the beginning; no surprise therefore that he and Elaine would later go on to found CTMS and the Folk Alliance.

On the eve of the 57th annual Topanga Banjo-Fiddle Contest & Folk Festival therefore, it is with pleasure I noted that Elaine and Clark—who were married for 26 years before her death in 2005—won their Music Legend Award for 2004 at their annual celebration of the best in the west in folk music. Everyone knows why Elaine won it, but how many know that Clark Weissman—from Cambridge, Massachusetts—helped put Peggy Seeger on the map—before she married Ewan McColl—and made Los Angeles the center of a folk festival that distinguished itself from all the rest of the nonstop performances that defined the usual festival by turning it into an educational workshop experience as well, with required handouts and serious preparation from all presenters who were a part of it.

A CTMS festival organized by Elaine and Clark was tantamount to a university seminar in folk music style, performing art and history of the times that became the soundtrack of America—from cowboy and railroad songs, labor songs, sea shanties, old-time music, protest songs, environmental and civil rights anthems and antiwar songs—presented by masters of the art form like the late Jean Ritchie and Sam Hinton. Elaine and Clark made a permanent mark on Southern California’s folk music legacy.

For who does not recall with pleasure the magnificent banners that Valerie Cooley and her stellar team of graphic designers and seamstresses created for the festival—to illustrate the folk songs and ballads which were sung in the workshops? They were hung all over the fences and grounds which folks walked through to get from one to the other. They were a cornucopia of visual as well as musical delights—from old railroad cars to loggers, cowboys and sailors—for a folk festival is nothing if it is not festive.

The Summer Solstice Festival which started out as The Dulcimer Festival, was held at an amazing variety of venues during its 23-year storied history—from the lovely Greystone Mansion of its early years to Cal State University, Northridge of its middle years to Soka University of its later years. In other words, it was far more enduring than the places it was temporarily housed. Whenever its temporary home evicted it, Elaine and Clark searched for a new home. Closing the festival never entered their minds. It was the most credible teaching festival—not in the city, and not in the state—but in the whole dad burned nation. You went to the more famous festivals—like Newport or Philadelphia—to see the stars—such as they were. But at Elaine and Clark’s you were the star—you came to learn something.

You left the other festivals—if you were lucky—with a pocketful of memories—slowly fading. But you left Elaine and Clark’s festival with a pocketful of miracles—handouts—patiently created by all the workshop leaders who thanked their lucky stars to be there—and took it upon themselves to translate and transcribe their hard won knowledge into lessons that would teach their festival participants how to master their instruments—guitars, banjos, fiddles, autoharps, harmonicas and dulcimers—the instrument that Jean Ritchie brought “down from the mountain” of Kentucky—and put on the map of American folk music. They made her the first honoree of their Lifetime Achievement Award—which I saw her receive at CSUN in 1983.

They were the same instruments that hung on the wall of Elaine and Clark’s treasured home in Tarzana on Trancas Place—which they bought in order to host a concert series to give their favorite performers a chance to play—the ones who were too good to play at McCabe’s, such as the late Cathy Barton and Dave Para of Boonville, Kentucky. But as good as they were, they were never too good to lead a workshop at the Summer Solstice Festival—where the object was not to entertain, but to teach—and educate the audience into the mysteries of folk music—the songs and stories that make up the treasury of our folk heritage. Clark Weissman made that his life’s mission, from Peggy Seeger on.

Talk about a wonderful life—Clark had one—with six children, “the Festival”—Elaine’s seventh child she had with Clark—nine grandchildren, and his old-time banjo that graced the stage. He truly was the father of our country.

Clark was laid to rest beside Elaine on Wednesday, June 23rd at Mount Sinai Hollywood Hills. Rabbi Ed Feinstein presided over his service at the TaNaCH Chapel, where the good Rabbi gave Woody Guthrie the last word:

All that I promise is strength for this day,
Rest for my worker, and light on your way.
I give you truth when you need it, my help from above,
Undying friendship, my unfailing love.

I never did promise you crowns without trials,
Food with no hard sweat, your tears without smiles,
Hot sunny days without cold wintry snows,
No vict’ry without fightin’, no laughs without woes.

All that I promise is strength for this day,
Rest for my, worker, my light on your way,
I give you truth when you need it, my help from above,
Undying friendship, my unfailing love.

I sure didn’t say I’d give you heaven on earth,
A life with no labor no struggles no deaths,
No earthquakes no dryspells, no fire flames no droughts,
No slaving no hungers, no blizzards no blights.

All that I promise is strength for this day,
Rest for my worker, my light on your way,
I give you truth when you need it, my help from above,
Undying friendship, my unfailing love.

I promise you power, this minute this hour,
The power you need when you fall down to bleed,
I give you my peace, and my strength to pull home
My love for all races all creeds and all kinds.

Rest in Peace; dear Elaine and Clark. Bless you both—forever and a day, together again.

Ross Altman has a PhD in Modern Literature from SUNY-Binghamton (1973); he belongs to Local 47 (AFM); and leads the Santa Monica Traditional Folk Music Club. Ross writes for FolkWorks; he may be reached at greygoosemusic@aol.com