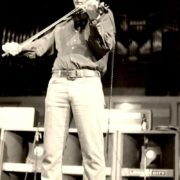 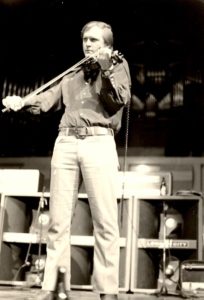 Berline was born in Caldwell, Kansas, on July 6, 1944. He started playing the fiddle at age five and quickly developed his talent. In 1965 he recorded the album Pickin’ and Fiddlin’ with the Dillards. That year he met Bill Monroe at the Newport Folk Festival and was offered a job with Monroe’s Bluegrass Boys, but he turned it down to finish his education. He graduated from the University of Oklahoma in 1967 with a teaching degree in Physical Education and joined the Bluegrass Boys in March, replacing Richard Greene. He recorded three instrumentals with them, including Gold Rush, which Berline and Monroe co-wrote, and which has become a jam session standard. Berline left the group in September 1967 when he was drafted into the Army.

Discharged from the Army in 1969, Berline joined Dillard & Clark on the album Through the Morning, Through the Night. He moved to Southern California that year.

He joined The Flying Burrito Brothers in 1971, recording two albums, Last of the Red Hot Burritos (Live) and Six Days On the Road: Live in Amsterdam. After the Burritos’ breakup, Berline briefly worked with Stephen Stills’s band Manassas (which also included several other Burritos’ alumni) contributing to several songs on their debut album. Together with Alan Munde, Kenny Wertz, and Roger Bush, Berline formed the band Country Gazette early in 1972.

Berline joined guitarist Dan Crary, banjoist John Hickman and others to form Byron Berline and Sundance. Their self-titled debut album was released on MCA Records in 1976. A young Vince Gill later joined the band on mandolin. The album Live at McCabes was released in 1978.

In 1979 Berline had a small role as a country musician in the film The Rose. In 1987, he appeared briefly playing violin in the first-season episode “Where No One Has Gone Before” of Star Trek: The Next Generation.

In 1981 he again collaborated with Crary and Hickman, forming the band [and get ready for this – Ed.] Berline, Crary, and Hickman (BCH). A subsequent line up also included Steve Spurgin and John Moore. That band later became known as California. California was named the International Bluegrass Music Association Instrumental Group of the Year in 1992, 1993, and 1994.

In April 1995, Berline moved to Guthrie, Oklahoma, to open a fiddle shop called “Double Stop”. From the jam sessions there on the upper floor The Byron Berline Band was formed.

Two years later he founded the annual Oklahoma International Bluegrass Festival, to which he has invited many bluegrass icons, including Earl Scruggs, Ricky Skaggs and John Hartford. Famous international bluegrass bands have also performed there, such as Druhá Tráva (Czech Republic), the Kruger Brothers (Switzerland) and The Japanese Bluegrass Band.

Berline has recorded several solo albums, most notably Fiddle and a Song, with guest performances from Earl Scruggs, Bill Monroe, Vince Gill and Mason Williams. In 1995 it was nominated for a Grammy Award for Best Bluegrass Album. Its song “Sally Goodin” was nominated for Best Country & Western Instrumental Performance.

The Byron Berline Band currently includes Thomas Trapp, Richard Sharp, Greg Burgess and Bill Perry. They regularly play around the US and in Europe, but also give two concerts a month for the townsfolk of Guthrie.