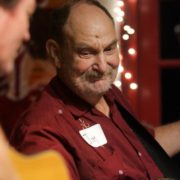 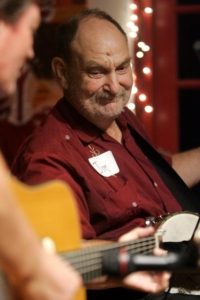 Tucson folklorist “Big” Jim Griffith died over the weekend. His nickname came from his six-foot-seven-inch stature, but he also stood tall in the community as the founder of Tucson Meet Yourself and promoter of cross-cultural understanding.

“It is with humility and sadness that we share our beloved teacher, elder, and Tucson Meet Yourself Folklife Festival co-founder, Dr. James S. “Big Jim” Griffith has transitioned from this earth,” read a posting on the group’s Facebook page Saturday evening.

“Big Jim passed quietly and peacefully at his home. His love for these lands and their cultures is a light that will continue to illuminate new ways to come together in community.”

“He will be remembered with a banjo in hand and field notebook in his pocket, and for his deep respect for the cultures and communities who call the Southwest and U.S.-Mexico Borderlands home,” the post continues.

Griffith, a towering figure who had struggled with health issues for years, explored the people, cultures and history of the region in several published books, including “Saints, Statues, and Stories: A Folklorist Looks at the Religious Art of Sonora,” in 2019.

Music also was an important part of Griffith’s life. In 2018, he was inducted into the Tucson Musicians Museum.

But along with his expansive knowledge of the region’s history that he often shared in stories, many Tucsonans will remember Griffith for his involvement with Tucson Meet Yourself. He cofounded the annual celebration in 1974, and it has grown to fill downtown Tucson with food, music and dance from around the world.

At the time Griffith help establish the festival, he was the director of the University of Arizona’s Southwest Folklore Center. It’s a post he held for about two decades.

Tucson Meet Yourself has been described as a celebration of the richness and diversity of the living traditional arts of the folk and ethnic communities of our region. In translation, that means that we invite traditional artists, craftspeople, singers, musicians, dancers, and cooks from as many as possible of the components of our complex society, and let it all happen. Or as one friend put it, it’s the only occasion in the year at which one can watch a Ukrainian Easter egg decorator, eat a Vietnamese egg roll, and listen to a Tohono O’odham polka band, all at the same time!

A celebration of his life is expected early in 2022.

Washington, DC—It is with great sadness that the National Endowment for the Arts acknowledges the passing of folklorist Jim Griffith, recipient of the 2011 Bess Lomax Hawes NEA National Heritage Fellowship, awarded to an individual who has made major contributions to the excellence, vitality, and public appreciation of the folk and traditional arts. “Big Jim,” as he was affectionately known, was devoted to celebrating and honoring the folkways and religious expression found along the United States-Mexico border. He directed the Southwest Folklore Center at the University of Arizona and founded the annual folklife festival, Tucson Meet Yourself.

In a 2011 interview with the NEA, Griffith discussed the creation of Tucson Meet Yourself: “We figured we’d produce an occasion where folks could enjoy other cultures and have the different cultural offerings in the town presented with a certain amount of knowledge and accuracy and dignity….That was really one of our hidden motives—community building. It has taken a long, long time but I’m very happy with where it is and what it’s doing.”

Born in Santa Barbara, California, Griffith came to Tucson in 1955 to attend the University of Arizona, where he received three degrees, including a PhD in cultural anthropology and art history. From 1979 to 1998, Griffith led the university’s Southwest Folklore Center, dedicated to defining, illuminating, and presenting the character of the Greater Southwest. In 1974, Griffith co-founded Tucson Meet Yourself, a festival that celebrates Tucson’s ethnic and cultural diversity, with more communities participating every year.

Griffith was honored for his distinguished service to folklore and the state of Arizona with awards such as the American Folklore Society’s Benjamin A. Botkin Prize in 1998 for significant lifetime achievement in Public Folklore, the 2005 Henry Glassie Award from Vernacular Architecture Forum, and the 2009 Pima County Library Lifetime Achievement Award and served as the Grand Marshall for the 2010 Tucson Rodeo Parade. His professional commitment was always to understand the cultures of the Southwest region and to pass along that knowledge and understanding to the public as respectfully and accurately as possible.