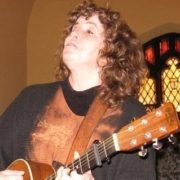 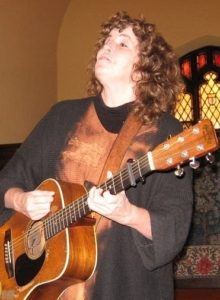 Epigraph: “Art is not a mirror held up to reality, but a hammer with which to shape it.” (Bertolt Brecht—quoted on Anne Feeney’s CD, Have You Been to Jail for Justice?)

Chorus:
When they waged a war on the workers
She always led the fight
She never bragged and never begged
She just stood up for what was right.

What can you say of an old-fashioned troubadour?
But aren’t you kind of glad they don’t make them anymore
Who wore her heart on her sleeve her only weapon her Martin D-28 guitar
From sea to shining sea she never tried to be a star.  (Ch)

Lung cancer couldn’t stop her—the bosses couldn’t top her
She fought for her son and daughter to put food on the table
Until Covid-19 got her—came crashing down like water
“Have you been to jail for justice?” She sang when she was able. (Ch)

Like Emma Goldman, Emma Lazarus—and Elizabeth Gurley Flynn
She was always passing the hat but never took a dime from labor
She asked “How much lunch is?” and rolled with the punches
She read the Penny Saver and tried to be a good neighbor. (Ch)

Anne Feeney was an essential worker—against the powers that be
Like Joe Hill and the IWW she fanned the flames of discontent
For the miners and nurses and local unions she sang out for liberty
For all those struggling one day at a time just to pay the rent. (Final Chorus)
By Ross Altman © 2021 Grey Goose Music (BMI)

Following is Anne Feeney’s first song—which won First Prize in the Kerrville New Folk Competition in 1989—I Married a Hero—but let her tell her own story:

“This was the first song I ever wrote. During a 1985 trip to Ireland I met several women who had kept things together while their husbands were in jail, often without charges, for purported “rebel activity.” The day to day lives of these women were exhausting, as they raised their children, and kept the households together, while poems and songs about the bravery of their spouses were sung all over Ireland. I won the Kerrville New Folk Competition in 1989 with this song.”

I Married a Hero by Anne Feeney

I married a hero – now I’m living alone
His life was held forfeit for defying the throne
The cause, it is noble – he died for what’s right
But it can’ ease the pain in the home that’s so lonely at night

I married a hero – now I’m living alone
They call him an outlaw – his location’s unkown
The last time I saw him took the few pounds I had
And left me this baby, who’ll not know her dad

I married a hero, now I’m living alone
My love’s bound to wither behind barbed wire and stone
They say he gets my letters, but I’ve not much to write
And our bed seems so large now – so empty at night

And I curse the injustice that keeps us apart
How could it have been wrong to surrender my heart?
Will our children be heroes or widows in time?
I’d gladly take his place, but would he take mine?

I married a hero, now I’m living alone
I worked at the two jobs ’til our babies were grown
Now I grieve that the same fate awaits them as well
My love rests in peace now, and I live in hell

And I curse the injustice that keeps us apart
How could it have been wrong to surrender my heart?
Will our children be heroes or widows in time?
I’d gladly take his place, but who would take mine?

She was the quintessential Rebel Girl, and just like Joe Hill’s Flynn:

“Yes, her hands may be harden’d from labor
And her dress may not be very fine;
But a heart in her bosom is beating
That is true to her class and her kind.
And the grafters in terror are trembling
When her spite and defiance she’ll hurl.
For the only and thoroughbred lady
Is the Rebel Girl.”

Like Flynn, Anne Feeney was Irish, and spent her summers leading tours to Ireland, where she wrote that first song.  She was also the first and only female president of the Pittsburgh Musician’s Union Local.  Her business cards read “Performer, Producer, Hellraiser.” Notably she also founded the Rape Crisis Treatment Center in Pittsburgh.

One of her favorite musicians and fellow IWW member was Texan Al Grierson—“Poet Laureate of Luchenbach”—who died tragically in 2000 when his pickup truck washed away in a flash flood while trying to drive home from a local school booking.  Feeney  recorded a number of his songs, including Widow’s Lament and Flowers of Auschwitz on her classic CD, Have You Been to Jail for Justice?

The title song is her ode to civil disobedience, beginning, “Was it Cesar Chavez? Maybe it was Dorothy Day/ Some will say Dr. King or Gandhi set them on their way / No matter who your mentors are it’s pretty plain to see / That, if you’ve been to jail for justice, you’re in good company.” The very last thing you will see on the liner notes to this CD is the following:  “All the musicians on Have You Been to Jail for Justice? are proud members of the American Federation of Musicians.” How refreshing!

Here is the opening verse of Flowers of Auschwitz:

“Oh the snow was softly falling on the little Polish town
And the winds of late December they were blowing
The clouds were all the color of the finest wedding gown
But it wasn’t from the clouds that it was snowing
And as we count the number of their names
May we come to see their ashes as the flowers of the flames
May our knowledge be the measure of our darkest memory
May our mercy be the measure of our knowing.”

That verse emanates the sorrow that Linda Huf, PhD brought to her book Andy’s Shoes: the Story of an Auschwitz Survivor, recounting the extraordinary life of an ordinary man; Andy (Abraham) Nord who was one of only 5000 souls who survived the largest death camp and death march in Poland—in which more than one million lost their lives before the Russians liberated it on January 27, 1945. (Cf. FolkWorks: Songs of the Holocaust.)

The second verse also tells the horrific story of Chilean poet Victor Jara—Linda’s favorite folk singer, who was murdered in the Estadio Chile—“But the silence only deepened in the bones of his guitar with the sound of every finger they were breaking”—and the third verse tells of the murder of the children of Sarajevo—in the Bosnian civil war—three horror stories that come alive using Auschwitz as a metaphor.  This reveals as well as any single song what a loss we have sustained in Anne Feeney’s death.  She had a worldwide consciousness and conscience she brought to all of her music.

This international scope of Feeney’s work is further demonstrated by the last song on her album—The Internationale—by Eugene Pottier and Pierre DeGeyter from 1871—English words by Charles H. Kerr (1901) There are two things especially noteworthy about the song:

Unlike so many other performers Feeney sings the real song, written by Eugene Pottier (as published in the Wobbly’s Little Red Songbook)—with the exception of one word—while the author was running for his life. (Pierre DeGeyter’s music was added later):

The one word Feeney changes is in the chorus—and so right and inevitable does it seem that you just barely notice it, nor does she take any credit for it: “Tis the final conflict/Let each stand in place/For the international working class” and here the original says “Shall be the human race.”  What does Anne Feeney say? …“shall free the human race.” Wow! What an improvement!  Feeney turns this worker’s classic into a great song!

She also includes her socialist anthem For Gene Debs which gives you an outstanding introduction to his thought and many of his most meaningful quotes:

That in a nutshell is why I have admired and followed Anne Feeney all these years—she’s the true queen of soul.  Anne Feeney leaves behind her son and daughter Daniel and Amy Sue Berlin. She died in a hospital in Pittsburgh, where she had gone because she fell and broke her back. While being treated for that she was exposed to Covid-19 and came down with it—much like John Prine got infected while hospitalized in Tennessee for something else. Her friend Al Grierson wrote a song which many have sung at both weddings and funerals; Till the Circle Is Complete; as fitting a eulogy as one is likely to find.  In one section Grierson sings of living and dying; let it stand for Anne herself:

May you set your shoes to dancing
in the hour of your death
and meet it with the courage it deserves.
May your shadow pass in pirouettes
of such amazing grace
that the tears of those who mourn you
disappear without a trace
In a smoke that shapes their sorrow
to the fading of your feet
In a ring around the rainbow
where the circle is complete.

“If I can’t dance,” Anne Feeney loved to quote Emma Goldman, “it’s not my revolution.”

Ross Altman has a PhD in Modern Literature from SUNY-Binghamton (1973); belongs to Local 47 (AFM); serves as president of the Santa Monica Traditional Folk Music Club; writes for FolkWorks; he may be reached at greygoosemusic@aol.com