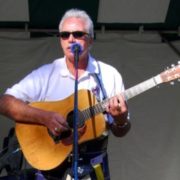 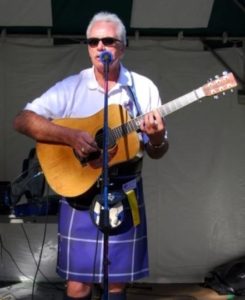 It is with heavy heart that I announce the passing of Alex Beaton on May 27th. He died peacefully here at home with his devoted wife, Linda, by his side.

Alex was born and raised in Glasgow, Scotland beginning in July of 1944. Alex had a wonderful career in folk music. His professional career started when he was 19 years of age with two school pals. They formed a folk group, “The Cumberland Three” in 1964 and recorded a single “45 RPM” and an LP “Introducing The Cumberland Three”. This was at the end of the folk boom and the rise of pop groups and so, the group disbanded and Alex immigrated to the U.S. in the early summer of 1965. He lived with his sister and brother-in-law in the small town of Ballston Spa, New York. It was there he performed at an upscale restaurant, The Jamaica Inn. He sang weekly on a local television program in Albany and produced a show for Public TV in Schenectady.

In April of 1966 while as a permanent resident he was drafted into the U.S. Army as they were building up military personnel for Vietnam. He then enlisted for a third year where he could choose his military occupation (Personnel). Alex was stationed at Fort McClellan, Alabama, and after three months there, he entered a talent competition and was offered a job with the Third Army Soldier Shows in Fort McPherson in Atlanta, Georgia. He was the lead singer of this theatrical show. While there he received orders to a hospital in Germany, but the Director said that he could arrange for Alex to stay with the Soldier Shows.

He decided to transfer to Germany where he could be closer to his family in Scotland. After taking a leave of absence to travel back to Scotland to visit family he reported to Headquarters in Frankfurt. It was there while checking in with Personnel that the Clerk inquired about the Soldier Shows. The Clerk then arranged for Alex to have a Temporary Duty to audition for the Chorus stationed in beautiful Heidelberg. He passed the audition and joined the 7th Army Soldiers Chorus and performed throughout Germany and other European countries. He left the Chorus with six months left on his service commitment. Upon discharge he returned to Atlanta, Georgia and joined Capital Records, but after several months there was given the chance to return to The Jamaica Inn. Because Alex loved entertaining, he left Capital Records and moved back to upstate New York.

He had the bug to travel and see other States, so he eventually moved to Aspen, Colorado and, from there, to Phoenix, Arizona. He sang in a lounge at a well-known restaurant and his popularity caught the attention of the Phoenix Gazette where an article was written about him. From Phoenix he moved to Southern California in the Greater Los Angeles area. While there, he composed songs with his old army buddy and took third place at the International Song Festival in the Country Music category. While appearing at Bob Burns Restaurant in Woodland Hills, California Alex grew the interest of the Scottish Society of Los Angeles and they asked him to perform at their Annual Festival in 1983. He recorded an LP of Scottish Folk Music, “Sings of Scotland Forever” which he sold at the festival and became an instant hit. From there, Alex appeared at other Scottish Festivals (San Francisco, San Diego and Phoenix). From 1983 until he was injured in 2011, Alex regularly performed at various festivals and Highland Games throughout the United States.

Alex pioneered folk music at Scottish Festivals. His popularity grew to the point where he was appearing at all major Festivals around the country; opening the door for other Entertainers to follow. In 1996 Alex also began hosting annual tours to Scotland which were sold out every year.

A month after returning from one of his Scotland tours in 2011, Alex suffered a freak accident at home that left him paralyzed from the neck down. Over the past eleven years, he has suffered multiple bouts of pneumonia and regretfully last year saw his prostate cancer return and spread to his bones. Though he remained COVID free throughout this Pandemic, the toll on his lungs proved too great and eventually they gave out.

Alex loved entertaining live audiences and garnered a large following throughout the country who, even after being out of the public eye for so long, continued to touch base with him. He was so blessed and grateful for the love and support of his loyal fans and friends over the years. This support, along with a great medical staff and the continuous care by his wife and stepson kept him going for far longer than his doctors expected.

Per his request, he will be cremated and his ashes taken to Scotland. He also requested that there be no funeral or memorial service. He would like you to remember him in your own way and in your own time. Please know that he had a good life; lived it on his own terms and managed to carve out a career for himself doing something he loved.