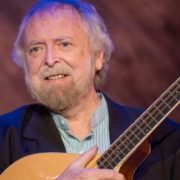 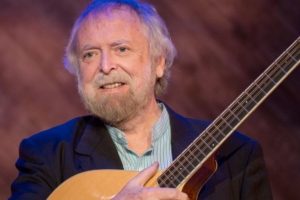 Irish Music Magazine are shocked and heartbroken to hear the passing of Dr. Mick Moloney.

Born 1944, in Limerick, Ireland, he began playing tenor banjo at 16 years of age. As a teenager he listened to American folksingers and especially enjoyed the music of the Weavers and Burl Ives. There was not a lot of traditional instrumental music being played where he lived and he used to go to neighbouring Ennis, just over the River Shannon in County Clare, to listen to music in the pubs. He tape-recorded the tunes so he could “bring them home” with him to learn them.

Growing up, he learned to sing traditional songs and to play guitar as well as mandolin and tenor banjo. During his formative years in Ireland, he played with the Emmet Folk Group, and later the Johnstons. His participation with those bands shaped his perspective on and honed his skills in Irish music. He spent five years touring and recording with the Johnstons.

Irish America were blessed when Dr. Mick Moloney arrived in 1973 and where he combined the careers of professional musician, folklorist, musicologist, teacher and arts presenter and advocate. With a Ph.D. in folklore and folklife from the University of Pennsylvania, he also taught ethnomusicology, folklore and Irish studies courses at the University of Pennsylvania, Georgetown University and Villanova University and was a Global Distinguished Professor at New York University in the Irish Studies Program and the Music Department. In 2008, he won the Golden Dozen Award for teaching excellence at NYU.

Dr. Mick Moloney will also be remembered as an accomplished singer as well as an instrumentalist and possessed a vast collection of songs and instrumental pieces from the Irish and Irish-American tradition. He is the author of Far From the Shamrock Shore: The Irish-American Experience in Song, published by Crown Publications/Random House in 2002 with an accompanying CD on Shanachie Records.

Dr. Mick Moloney recorded and produced over sixty albums of traditional music in the United States with noted traditional musicians such as Liz Carroll, Seamus Egan, Joanie Madden, Johnny McGreevy, Joe Shannon, Ed Reavy, Jack and Charlie Coen, Mike Rafferty and many others. He worked with various recording companies in doing reissues of some of the classic 78 rpm recordings of the 1920’s and acted as advisor for scores of festivals all over America and was director for 25 years of the Irish Week at Davis and Elkins WV – the first Irish music summer school in the USA. His talks at Catskills Arts Week were informative and educational and for many one of the highlights of the week each year.

He formed the group The Green Fields of America which has showcased Irish American traditional artists nationwide since 1978. He was also instrumental in forming Cherish the Ladies, the first all-woman group in the US. He has served on National Endowment for the Arts panels and tax forces and hosted three nationally syndicated series of folk music on American Public Television.

He was a performer and interviewee on the Irish Television special Bringing It All Back Home, a participant, consultant and music arranger of the PBS documentary film, Out of Ireland and a music researcher and performer on the 1998 PBS special The Irish in America: Long Journey Home.

In 1999 he was awarded the National Heritage Award from the National Endowment for the Arts – the highest official honor a traditional artist can receive in the United States by the then First Lady Hillary Clinton. In 2013 he received The Distinguished Presidential Service Award from the President of Ireland. In 2014 received the Gradam Cheoil Award from TG4 — the highest honor a traditional Irish musician can receive in Ireland. His internationally acclaimed CD’s McNally’s Row of Flats and If It Wasn’t For the Irish and the Jews, explore songs of the nineteenth and early twentieth-century popular stage in America and were both granted the prestigious Livies award for best CD of the year.

Dr. Mick Moloney was a great supporter and positive influence of Irish Music Magazine and most generous with his time over the years as he was with countless individuals and artists during his life.

Our deepest condolences to the family, extended family, cherished friends and all that knew this great man.

These were two typical reactions to the news yesterday that musician and historian Mick Moloney had died suddenly on Wednesday at age 77.

“With profound sadness,” Glucksman Ireland House NYU and the Music Department of NYU announced in a statement the passing of the Global Distinguished Professor of Music Dr. Michael “Mick” Moloney.

“One of Irish America’s legendary performers and a leading historian of Irish music, Dr. Moloney was born in Limerick and received his B.A. from University College, Dublin and his Ph.D. from the University of Pennsylvania,” said the statement issued on behalf of Professor Kevin Kenny, Director of Gluckman Ireland House NYU, and Professor Michael Beckerman, Chair of the NYU Music Department.

“With his Green Fields of America ensemble, Dr. Moloney presided over the annual ‘Celtic Appalachia’ show, which ran over the St. Patrick’s Day holiday for many years until 2021.

“He served as Advisor to the National Endowment for the Arts and the Smithsonian Institution in a variety of capacities. He was honored for his services by the U.S. Government with a National Heritage Award and by the Irish Government with a Presidential Distinguished Services Award.”

The statement continued, “In 2006 NYU’s Archives of Irish America became the repository for Mick Moloney’s extensive collection of Irish American music and popular culture. Over 200 linear feet of material documenting his long career as a folklorist, producer, musician, and academic are open for research by appointment in Bobst Library’s Special Collections Center.

“We are grateful, Mick, for all the songs and stories you so generously shared.

“We extend our condolences to Mick’s son, Fintan, to his family in Ireland and in Thailand, and to his many students, friends, and collaborators across the world.

“Ní bheidh a leithéid ann arís [There will never be the likes of him again].