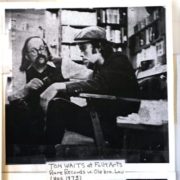 A remembrance and appreciation 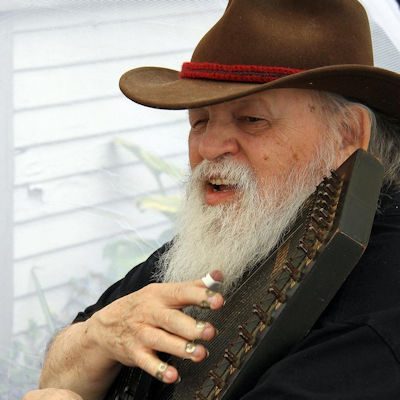 Louis F Curtiss has passed away at home at age 79.

In 1972, a few months after I arrived by thumb in San Diego from my native New England, I was on a city bus and saw a sign, “Hoot Night Tuesday” in a shop window. So I screwed up my courage and returned some Tuesday soon after, played a few songs, and was asked by the proprietor to come back and do a weekend concert and, later, play in the locals first night concert at the San Diego Folk Festival. That was Lou at his store, Folk Arts Rare Records. He and his wife, Virginia, his essential partner in all things, kind of adopted me, giving me the third chair in The Old Home Town Band like so many young players before and after me. They introduced me to Sweet’s Mill and encouraged my musical pursuits in countless ways.

Lou ran quite a salon at Folk Arts, where “folkies” of all stripes would drop in and hang out throughout the day. During the winters, Sam Chatmon came out from Mississippi to stay with his daughter, and spent most of his weekdays in an overstuffed chair up front, socializing with all comers. Hoots one night, shape note singing led by Curt Bouterse another, concerts at the weekend where the best seats were cushions on the floor under the record bins. 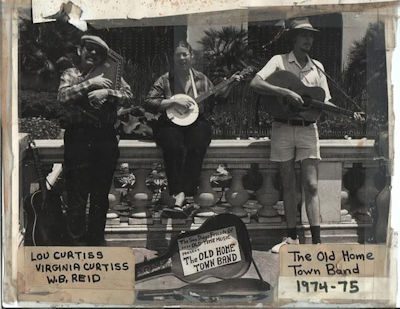 Many times I would be hanging out at Folk Arts, and Lou would start out kind of low energy, but suddenly spark to life saying, “I’m gonna make you a tape.” He’d load a 60 minute cassette into the machine, get the first track going, and then graze over his vast collection of LPs, reel-to-reel tapes, festival recordings, radio transcriptions, and pick out the next tune for me, just for me, repeating until the tape was full. I have a half dozen of these I can still find, and each is an eclectic survey where I find the beginning seeds of nearly every branch of music I’ve pursued. Lou sold such tapes as a business, but if he thought you had something to offer, they were gifts; many of us received these.

Lou ran some version of the San Diego Folk Festival every Spring from sometime in the ’60s until well into this century. The festivals of the middle 70s were a peak, packed with the greats of the ’20s and ’30s who, recently retired from day jobs, found a new audience in the revival raging among college students and similarly aged slackers. I don’t want to list them all here…but it was everybody, and Lou made plenty of room in the schedule for all us upstarts who brought so much energy to the party. Performers were very lightly scheduled, resulting in opulent time for mixing between generations and cultures. Dewey Balfa jamming with Aly Bain; Lydia Mendoza playing with Kenny Hall.

I know many musicians whose life and music path was permanently altered due to Lou’s generosity, or to encounters at his wonderful events. There’s a great picture on his page of Lou with the young Tom Waits, who was among the recipients of Lou’s encouragement. I’m pretty sure Del Rey played at that same hoot night as me, and was also signed up for a concert and the festival. The first thing on her website bio is really a tribute to Lou, who told her to “quit wasting [her] time playing ‘Stairway to Heaven’ and listen to some Memphis Minnie.” 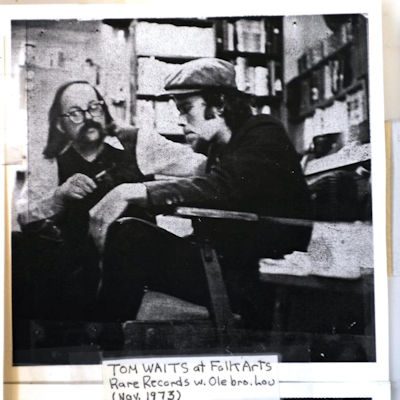 This man had an impact on the world, and particularly my own community, that’s truly beyond measure. I’m so thankful that about four years ago I managed to get down to the shop and visit Lou for a few hours, much of it Lou telling me of all the young local musicians he was excited about. Later we went out to dinner with him and Virginia; the fact that we went to Rudford’s will bring a smile to those that know. He gave me a disc that I cherish with four concerts I did when I was between 22 and 24. Walking from the store to the car was followed by three or four minutes of Lou getting his breath back; I suspected I might not see him again.

My condolences to all his friends new and old, and especially to Virginia and their son, Ben. My life would be so different if I hadn’t seen that sign in the window that day, and tears come as I write that. I’ll miss him, but I don’t think I can really mourn him; he lived a long and thoroughly useful life.

[Ed.: Other tributes can be found on The San Diego Union-Tribune and on Lou Curtiss’ Facebook page.