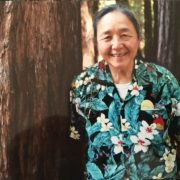 Reprinted from the January-February 2022 issue of the folknik, the newsletter of the San Francisco Folk Music Club. 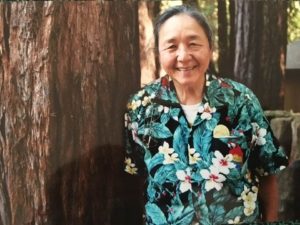 I first remember seeing Lani at SFFMC’s New Year’s Camp in 1983-84, the final one at Camp Bothin. She was leading a song I had never heard before. We crossed paths at many song and tune sessions in the 30 or so years after that. I heard her lead many songs, most of which I had not heard sung by anyone else. She also sung rounds in several languages, leading many rounds workshops at the San Francisco Free Folk Festival and Camp Harmony. She sang harmony vocals on Gordon Bok’s album Another Land Made of Water. She wrote the great Christmas parody song The Pickle Tree Carol. She also wrote A Sharing Round:

Good friends who come from far and near
to gather round this bread we share:
Let friendship glow like fire bright,
and music warm us through the night.

Companions, let us all rejoice
in harmony as with one voice.
Join hands with those from far and near,
in peace and love through all the year

Lani was also a very good fiddle player, playing tunes from multiple traditions. She played other instruments too: banjo, guitar, English concertina and possibly others. She led the Starry Plough Irish Ceili Band in Berkeley for many years. She played fiddle on at least three Folk Legacy albums, including Archie Fisher’s 1976 The Man with the Rhyme. 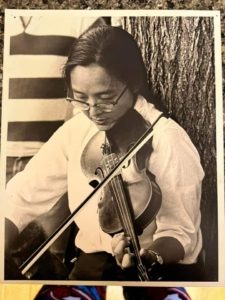 Lani first encountered the folk revival in college in Chicago in the 1950s, and her contributions to the folk community went well beyond her own playing and singing. As a newcomer to the Washington DC area in 1964, she was one of the co-founders of the Folklore Society of Greater Washington (FSGW) which is still active today. She edited and produced several songbooks including Gordon Bok’s and Bill Staines’s. She co-edited the 1990 book Sam Henry’s Songs of the People, a 700- page collection of Irish songs in English. She designed album covers or booklets for at least nine Folk Legacy records.

In recent years Lani’s health began to fail, and she and her husband Cal Herrmann moved to Hawaii, where Lani had grown up and where she and Cal got married in 1961. In my mind, I can still see and hear her singing, with her hand raised and her index finger pointing upwards and a little smile on her face. Rest in peace, Lani.

By Daniel Hersh, with research help from David Brown