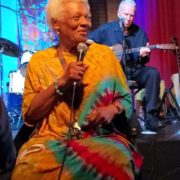 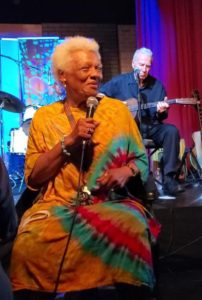 Barbara Morrison was born in Ypsilanti, Michigan, a suburb of Detroit and recorded her first radio appearance on the radio in Detroit at the age of 10. In the 1970s, Morrison moved to Los Angeles and became a ‘musical precious stone’ to Southern California residences.

She performed in a wide array of genres from traditional jazz and blues to gospel and pop. Her melodic voice, with two-and-a-half octave range, is known worldwide, as are her rich, unique, soulful, and highly spirited interpretation of both familiar classics and original contemporary tunes. Equally as striking was Morrison’s ability to belt out down-home, soul-stirring blues.

As a vocalist, she was featured on two Grammy Award-nominated albums and produced a third Grammy Award-nominated album. Over the course of her 60-year career, she performed with a virtual “Who’s Who” of the jazz and the blues worlds. She recorded more than twenty of her own albums/CD’s featuring a catalog of original compositions, popular standards – some live and some in studio.

In 2009, she founded the Barbara Morrison Performing Arts Center in the Leimert Park area of Los Angeles. Music fans could listen to live Jazz, Blues and Soul music from musicians from around the world as they sipped on wine and ate snacks, while tapping their feet to the beat of the music. Morrison was known to give children free music and voice lessons as well as an opportunity to perform on her stage.

In 2011, Morrison founded the California Jazz & Blues Museum, also in Leimert Park, which was filled with photos of the rich history of legendary Jazz and Blues musicians and vocalists. Morrison also served as an Associate Professor of Jazz Studies in the Global/Ethnomusicology Department at UCLA in Westwood, CA.

Her brother, Richard Morrison has said that they are working on keeping the Barbara Morrison Performing Arts Center to preserve her legacy.