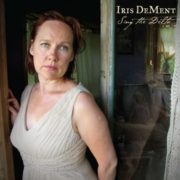 A Conversation with Iris Dement 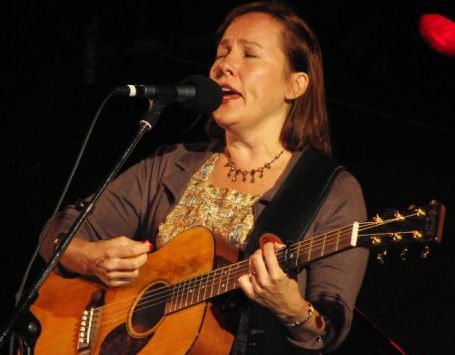 In one of her best known songs, Mama’s Opry, singer-songwriter Iris Dement tells the story of playing alongside her mother during her childhood as she listened to her sing. Flora Mae Dement, who passed away in 2011 at 93, was a devoutly religious woman, so southern gospel music was always a part of her repertoire. However, in the presence of her young daughter she would also sing many of the less religious songs she heard on the Grand Ole Opry. She even revealed to young Iris how she dreamed of one day appearing on the show. It’s a story best illustrated through the lyrics of the song:

The Carters and Jimmie Rodgers played her favorite songs.

And on Saturday nights there was a radio show and she would sing along.

I’ll never forget her face when she revealed to me,

That she’d dreamed about singing at the Grand Ole Opry.

– from Mama’s Opry on Infamous Angel

Although she was born in Arkansas, Iris grew up with her 13 siblings in Anaheim, California. Her church upbringing in a Pentecostal family provided a lifetime of southern gospel music around the home.

During a recent interview from her Iowa home she explained how she identifies most with the music of her church and the songs she heard from her mother. “I was submersed in the music from church.” She said. “At church and at home, people sang. I still sing from that place. I want to be that lady singing in church.”

Since she first stepped into a studio in 1992, Iris Dement has contributed one of the most unique voices (both as a writer and a singer) in Americana music. Her mother’s influence made a lasting imprint on a voice that ranks with many of the legendary women of country music. She doesn’t belong with Emmylou Harris as much as she does with Kitty Wells. It’s a voice that other, younger Americana artists, try to capture and emulate. But, like past generations of country and blues singers, her voice comes from her being. It is who she is. To understand this, give Mama’s Opry a close listen. As the story of the young girl unfolds, she reveals her voice is an extension of her mother.

Her eyes, oh how they sparkled when she sang those songs

While she was hanging the clothes on the line

I was a kid just a humming along

Well, I’d be playing in the grass,

to her what might’ve seemed obliviously

But there ain’t know doubt about it

She sure made her mark on me

When a songwriter sings from their core, it’s natural to wonder when she found she had this voice. “So long ago I couldn’t tell you. My mom sang constantly,” she answered. “The harder life got, the more she sang. Always, it met some deep down place inside of me.” For her mother, music was a part of her daily life where she would find energy, comfort and joy. “She told me, before she died, singing is praying.” Dement continued, “I find that songwriting is praying too.”

As we talked about the process of songwriting, she laughed. “I have no idea what my process is or how I write a song. It’s kind of like reminding myself of something I know but have forgotten.” She said. “It comes from someplace deep inside that is already there. I sit down and remind myself of what I already know.” She continued “My church taught me to have a purpose. There is something I’m supposed to do. Even when I moved on from the church, I never lost that thought. When I lose sight of it, I don’t want to write anymore.” When pressed further about the origin of her songs she said, “It’s like something in the universe said I was supposed to write songs. So that’s what I do,” she explained.

Among her best known songs is Our Town. It was written after a drive through a small Oklahoma town and it’s been featured in films, television and on Garrison Keillor’s Prairie Home Companion. When asked about the song she said, “I only wrote two songs before Our Town came tumbling out. That song has really has resonated with people.” 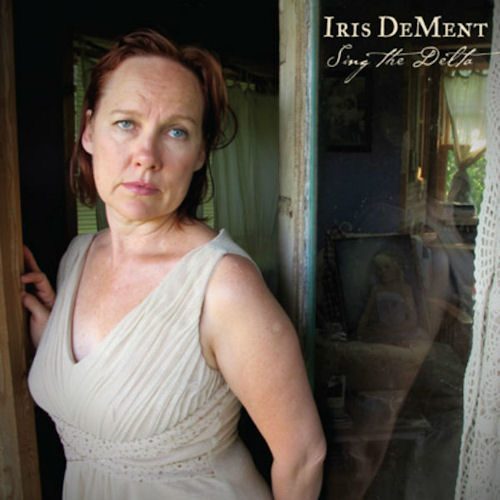 Her new release, Sing the Delta, is her first album of original material in 16 years. It is as good as her landmark debut album, Infamous Angel from 1992. Even though her releases have been few, each has been a reflection of her life journey. She has not considered commercial demands, but instead waited and lived her life until the songs were ready. During the intervening years she moved through a divorce, settling into her own house, remarriage (to singer-songwriter, Greg Brown) and the death of her mother. Her 2004 release, Lifeline, was interpretations of the traditional southern gospel songs she sang as a child. These songs became a lifeline to her recovery from the hardships of her past. Her vocal performance on this album is stunning. She brings each well-loved hymn to a new place filled with longing, mourning and a new-found joy.

When the conversation turned to songs from Sing the Delta, like many songwriters, she was reluctant to talk about how they took shape, preferring to allow the listener to find their own meaning. The album runs from love songs, Before the Colors Fade, to the spiritual, There’s A Whole Lot of Heaven. And there is another great one about Flora Mae Dement, Mama Was Always Telling Her Truth.

But, the song Making My Way Back Home Dement did want to discuss, due to the special meaning and story behind it. “I was reading a biography about Tammy Wynette. It is really beautifully written. Toward the end, the story becomes tragic,” she said “After I finished, the story stayed with me. It really bothered me. So, I sat down and started to play. That’s when the song tumbled out.” But, since Tammy Wynette was a kindred spirit as a singer and songwriter, Iris felt as though she was looking into a mirror.” It became more about me. I felt like it was something I needed to share with Tammy. I felt like it was something I could give to her. It was like…..she was moving on from a not-particularly-kind world to something that felt more like her music. It made me feel better. It was for me and her. Between Tammy and me as she made her way home.” Then, Iris added probably the clearest clue to what drives songwriters to do their work. “You see, I go to songs to make my internal world work better.”

Iris Dement is a rare songwriter, an American original who draws her songs out from deep within her spirit rather than from modern influences. Her musical lineage is with the earliest American songwriters including Stephen Foster, A.P. Carter and Hank Williams. But, in the end, her songs are an outgrowth of that sacred space her mother shared with her under California skies so many years ago.

Terry Roland is an English teacher, freelance writer, occasional poet, songwriter and folk and country enthusiast. The music has been in his blood since being raised in Texas. He came to California where he was taught to say ‘dude’ at an early age.